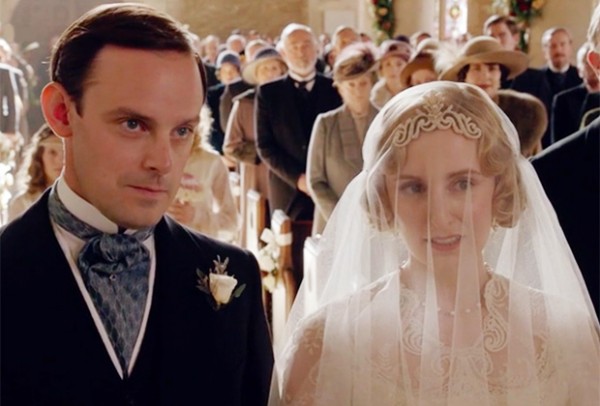 On Sunday night, those in the United States watched the final installment of Downton Abbey.  After six seasons it was time to button up the series and send off our favorite characters with some happy endings, new beginnings and touching moments. If you have not watched the finale, spoiler alert below, do not read any further.

In the finale, Anna (Joanne Froggatt) and Mr. Bates (Brendan Coyle) became parents to a baby boy; Lady Mary (Michelle Dockery) revealed to her her husband, Henry (Matthew Goode) that she is pregnant.  Tom (Allen Leech) and Henry opened an auto dealership, and Thomas Barrow (Robert James-Collier) returned after leaving ‘Downton’ for a new butler job, and took over for the ailing Mr. Carson (Jim Carter) who came down with “the tremor” and could no longer work in his life long capacity.  But the biggest and happiest event of all saw at long last  happiness for Lady Edith (Laura Carmichael), who married Bertie (Harry Hadden-Paton), the 7th Marquess of Hexham, moving past her family members in social ranking and wealth.  Good for her!

Addressing his decisions in story for the series finale, ‘Downton’ creator Julian Fellowes, who wrote each and every episode of the series, spoke to Deadline.  Here are just a few answers to his decisions for the beloved characters as the show wrapped its Emmy-winning run.

Fellowes on if it was always structured that Lady Edith would finally get her long-awaited happy ending in the finale: “I always knew that, but not from the very get-go. You’re still feeling your way into creating characters and writing for the performances you’re getting. In a way, you fashion characters with actors and their process of performance changes the way you write. But Laura (Carmichael/Edith) had this marvelous for me sort of gallant feeling underneath all her defeats. She was wretched and vulnerable, but you knew she was going to bounce back. There was a kind of decency, even though she wasn’t decent to Mary, but Mary wasn’t decent to her so fair enough. But her refusal to give up the child — and there are stories like that — you had to be pretty brave to risk exposure and all the things that might happen; I felt Laura develop into this courageous person that worked.”

Fellowes on if there was ever a time he thought of killing off another character:  The only person we killed off really was William the footman. We decided we couldn’t get the whole household through World War I and nobody dies. In my own family, my grandfather died in the trenches, an uncle died from injuries, there were four more cousins who died — including one woman who was on a ship that was torpedoed. That’s one family, so it wasn’t realistic. We kind of drew lots and it was William. Also, Lavinia came in to die. We knew that. Those are the only two I killed. The others died because the actors wanted to leave the show. When a servant leaves like O’Brien, she just got another job. But if it’s a member of the family and you know you’re not going to set eyes on them again… With Jessica (Brown Findlay/Sybil) and Dan (Stevens/Matthew), we said, ‘Would you be prepared to do two or three episodes? You’ll go away and come back.’ Neither wanted to do that. I’m not critical of that. They wanted to move on in their careers and not be pulled back into something they left which I understand. But the fact is they wanted to go so that meant the grim reaper, I’m afraid.

Fellowes on the evolution of Thomas and the series take on dealing with his homosexuality: “One of the things I like doing is when you create a character who initially the audience doesn’t take to but as the situation gradually unfurls and you understand the predicament, you start to see a point of view. Thomas was very aided by Rob James Collier’s performance and gradually the audience became aware that being a homosexual in 1912-1925 was very tough. It was a crime — one moment of indiscretion, one drink too many and your life is in ruins. Even if you’re not in prison, you’re unemployable, so this is all the time hanging overhead like a sword and by making the audience aware of his sense of loneliness, that his family didn’t accept him and he craves acceptance, to belong to something… He is constantly denied that so by the end even very stuffy old colonels would still secretly feel quite sympathetic. That’s what I’m hoping. You gradually enter into the situation of someone who in real life you might not take to, but maybe the next time you might think differently.”

Fellowes on the Downton Abbey movie that is being bantered about, and if it could happen:  “I’m very pro-movie. I hope and think there’s a very good shot. They have to be sure to have enough of the cast. They’ve all rushed off into other work in television, films, plays… so I imagine it would be quite a job getting all the ducks in a row. But I’m not anti it at all.”

So, what did you think of the Downton Abbey series finale?  What was your favorite part of it? Share your thoughts in the comment section below!

Alison Sweeney Posts Video Fighting Back Against Company Claiming She Is Endorsing Their Diet Product!

So sad to see Downton come to an end. Great to see all the characters have a happy ending. Would love to see a movie but only with most of the original cast. Best show on TV for these past years, and I always looked forward to it. Nothing else comes close.

There are not enough superlatives for Downton Abbey and the final episode did not disappoint. There was a happy ending and a hope filled future for everyone. I expected to be a blubbering mess throughout the entire episode. Don’t get me wrong. I used many tissues to wipe away the tears of joy. But there was so much hope for all these wonderful characters that I found myself grinning from ear to ear. The entire series was superb by every measure. Thank you to everyone involved for taking us viewers on this magnificent six year adventure.

I saw it months ago and thought it to be a rather fitting ending – for now. Here’s to hoping for more Downton somewhere down the line 🙂

My all-time favorite scene in the finale was when Violet and Isobel face off against Lord Merton’ s son and daughter-in-law…it was breathtaking! The only thing that could have been better about it is if Violet used her cane on that nasty daughter-in-law.

It was a wonderful series. So sad it had to come to an end, but at least, it was a lovely ending. Will watch it all over again in a year or two.

A movie would be terrific! I only hope they get all the cast back together for it.

Thank you Mr. Fellows for taking us a great ride, wrapped in a history lesson, wrapped deeper in a wonderful story!

I’m still watching repeats of the finale….three down and at least three more scheduled to go! It’s just too hard to say that last goodbye! The entire series was a true masterpiece, and there shall never be another that can hope to approach its level of excellence……what a superb fete for Mr. Fellowes, et al! But having said that, I was a bit disappointed with various aspects of the ending. Given that Lady Mary and Dowager Countess Violet were my favorite characters, I had hoped that they ultimately would have prevailed with great flourish as the eldest Crawley proudly passed… Read more »