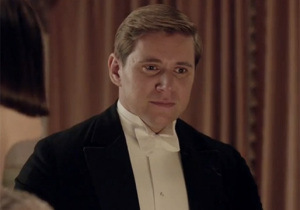 If you watched the season five finale of Downton Abbey on PBS Masterpiece on Sunday, you saw the 90 minute drama deliver tender and heartwarming drama to the melt the heart of someone who may be as cold as ice!

Within the season finale, Anna (Joanne Froggatt) came home from prison , Mary (Michelle Dockery) found what looks to be her new love, Branson (Allen Leech) said his goodbyes as he was moving to Boston and taking little Sibby with him, Lord Sinderby (James Faulkner) was knocked down several pegs, and the seniors were lucky and unlucky in love as Carson (Jim Carson) and Mrs. Hughes (Phyllis Logan) finally decided to marry each other in a major hankie moment, while Lady Violet, the Dowager Countess (Dame Maggie Smith) and Isobel Crawley (Penolope Wilton) came to the conclusion that they were better off alone then remarrying or rekindling romance with their suitors at this point in the their lives.

However at the Christmas party, when Branson asked Mary and Edith (Laura Carmichael) to join hands with him one last time to remember his wife and their sister Sybil, tears flowed from Branson and probably the rest of the “Downton” viewing audience, as this was to potentially be his final time  with the family before starting his life anew in Boston.

As for Lady Mary, she definitely was impressed by handsome and aloof gent, Henry Talbot (Matthew Goode) who had several prickly encounters and exchanges with her … enough to perk her up!  As he was leaving “Downton”, Mary asked if she will see him again to which he replied, that perhaps they would as he drove away in a very expensive car that he clearly made a point of letting Mary know he owned, and that perked up Mary once again! True love?

At the end of the season finale, it was Bates (Brendan Coyle) and Anna who had the final heartwarming moments. Bates  cast suspicion on himself once again for the murder of Mr. Greene to help free Anna from jail for the murder! To do so, he took off from “Downton”.  However in a clever move, Mr. Molesley (Kevin Doyle) and Baxter (Raquel Cassidy) proved by taking a picture of Bates and going bar to bar in York, that Bates was not near the scene of the crime that killed Anna’s rapist Mr. Greene!  At the Christmas gathering, Bates surprised Anna, and the two were finally reunited for a moment in time, as they secretly left the party for some private time together.

On Monday, news broke that Dame Maggie Smith, in an interview with the Times of London, noted that season six of Downton Abbey will be her last, and that she was not sure the series could even continue after this next season.  Smith commented, “They say this is the last one, and I can’t see how it could go on.  I mean, (my character) certainly can’t keep going. To my knowledge, I must be 110 by now. We’re in to the late 1920s.”

Smith did say completing the series would be very difficult for her:  “When you’re not working it’s scary, and when you are working it’s scary, because you don’t know if you’ve got the energy to get through the day. But the bleakness of not doing it, and missing out on the friendships that you make, is too much to bear.”

So, what did you think of the season five finale of Downton Abbey? Which moment tugged at your heartstrings the most? What did you think about the comments of Maggie Smith? Do you think its time for “Downton” to take its final bow with season six?  Share your thoughts below!

The Bold and the Beautiful Returns To The UK Via New You Tube Channel!

Linsey Godfrey Back To B&B: "Yes I'm Headed Back To Work For A Day This Week And I'm Very Excited!"

I want it to last forever. But realistically couldn’t it go thru the 1930’s?

So let me get this straight? This show airs only ten episodes from January to March of every year?

Ugh. Glad I don’t watch. I would die waiting.

That’s just the way of British programming, Leo. There are many shows which even shoot on a staggered year schedule….meaning that we don’t see new shows on an annual basis. It’s the trade-off of getting quality over quantity. I’d rather wait for something worth watching than to just put an allotted number of completed episodes in the can according to contract. But yes, the wait can be excruciating!

Loved every minute. Read an article today where Maggie Smith said she didn’t mean she was leaving the show after next season. She said if there is a 7th season she will be part of it. I certainly hope so since she is one of my favorites. I wish this show could continue forever. I can’t put my finger on why exactly but it’s my favorite show of all time.

It was a wonderful season finale. I was reduced to tears on several occasions. The scene between Mary, Edith and Tom remembering Sybil blew me away. I so hope Tom isn’t gone for good. His down to earth tenderness and honesty are such important parts of the family. Allen Leech is terrific in the role. Everyone delivered first rate performances throughout the 90 minutes. I cannot imagine Downton Abbey without the Dowager Countess; but, I do appreciate Maggie Smith’s concern about the character’s age. I’d like to see the series continue at least until the start of the Great Depression.… Read more »

I found the most emotional moment was Tom, Edith & Mary, in their children’s room, remembering Sybil.

Edith and her father sharing the truth about Marigold was very gratifying.

Mary’s extreme snobbishness with an intermittent smattering of humanity towards others is getting annoying rather than interesting or amusing.

All of it. The show makes me sorry when the hour is over. The characters are so likable you root for them all. Bates and Anna, Carson and Hughes. The family upstairs orthe working class, all are worth watching again. Wish I could say the same about the US soaps . Maggie Smith is a joy, and makes you wonder what years it will be when it returns. Great job. I guess when one writer has the power and knows the characters so well. You can’t go wrong.

The Brits know how to do it best…i wish our soaps were produced and written by them…i love Coronation Street…its mulitgeneration which appeals to all ages, character driven realistic stories about everday life, the dead stay dead and the children age normally-you dont see a five year old one month who turns 18 the next, and there are no long lost children some woman had forgotten she had given birth to!!!

Exactly, Janet!!!!! I cannot disagree with any of the sentiments you have expressed. Julian Fellowes is indeed an incredible writer who handles his characters with love and care…and it certainly shows!!!! It’s no wonder so many of us voice dismay at the plot-point driven drivel we witness on daytime after watching this consistently superb series year after year!

You could be right. I will really miss Tom. who knows maybe JF will have the characters travel over here, and NOT allow the American soaps to sneak in. A whole year to wait. Tom thinks they have snobs over there, Wait till he gets to America and hears Irish need not apply. I love the show and no matter what is on here in the US I watch this show first.

I enjoyed the moment between father and daughter when he acknowledged he Knew Marigold was his grandchild (out of wedlock in the 1920s!) and it was
a-l-r-i-g-h-t……Edith is one of my favorite characters!