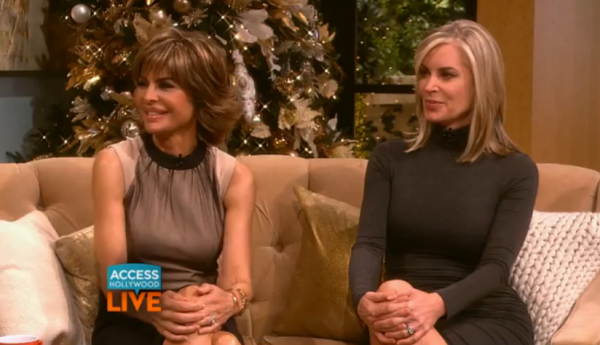 During their segments, the ladies talked about if being on the reality show was what they thought it would be when they agreed to sign on to be part of the Bravo series franchise, and more!

In one of the biggest “oops” moment of their appearance, when showing Eileen Davidson with her husband, Access Hollywood Live producers mistakenly kept showing a picture of Eileen’s former Y&R co-star Stephen Nichols!

Finally, Eileen revealed to the hosts that her husband is Vincent Van Patten, not Nichols!  Later, the girls settled in for a round of a game show that Kit and Billy called, “The Real Days Housewives of Beverly Hills,” where they were asked if the line of dialog they gave them was from DAYS or from “Housewives”.  See if the actresses guessed right!

After the jump, watch Eileen and Lisa on Access Hollywood Live, and then weigh-in on the segments and what they had to say!

Just started watching this because of these ladies! Love seeing Lisa on T.V again 🙂

I love Eileen Davidson back on Y&R. Sharon and Ashley are my favorites 🙂

I love the Housewives franchise and these two gals are a great addition to Beverly Hills. They are both so comfortable in their own skin and they seem genuine.

I agree. They are a welcome addition to the show. I’m really tired of Brandi- she has absolutely no class. I can’t wait to see what her excuse is for dousing Eileen with a glass of wine.

Michael, thanks for posting this. i forgot to record it! You are the BEST! Merry Christmas!!

I was sitting here like: When the hell did Eileen Davidson marry Stephen Nichols?!

I like Lisa and Eileen and wish them well. I’d never seen RHOBH and forgot to watch Lisa & Eileen’s debut on it. After seeing clips of that show, I want to watch RHOBH at all. The other ladies on that show are a huge turn off. Sorry Lisa and Eileen. I just can’t follow you to RHOBH. Call me again for your next project.