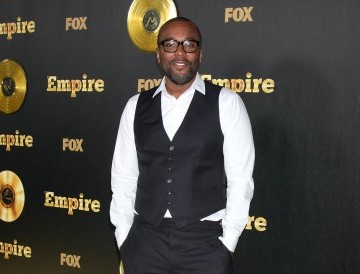 FOX hit primetime soap opera Empire continues to be the darling of the television season, and with plenty of good reason! Compelling family drama set against the backdrop of the hip-hop music world, sharp writing, a palette of characters that is any soap fans dream (Cookie Lyon, we mean you!), 80’s style sudsy fare a la Dynasty, and its socially conscious tales and relevance of today.  All of this stems from the creative genius of Oscar-nominated director (Precious) and Empire creator, Lee Daniels.

On-Air On-Soaps Michael Fairman chatted with Daniels while he was editing the season one finale of Empire for a new feature out on newsstands and online today for Frontiers LA.

In it, Lee discusses just how he is determined to cast a light on homophobia in the African-American community during the run of Empire, and how the character of Jamal (brilliantly played by the multi-talented Jussie Smollett)  is poised, ready, and willing to take the family business with his take-no-prisoners attitude and inner-resolve, as those around him try to keep him down through their narrow-minded thinking.

It came as no surprise during our chat, that Daniels was a big fan of daytime soaps growing up, and in particular revealed there is one celebrity he has never met that would probably make him faint … Susan Lucci!  Here are a few excerpts from the feature below:

Daniels on how his love of the soap genre impacted his storytelling: “Growing up on daytime soaps was an important part of the fabric of who I am as a filmmaker.  I have met many stars, but the celebrity I am most impressed with that I haven’t met, and I would probably faint if I did is Susan Lucci (Ex-Erica All My Children)! Dynasty really came to me hard. It affected me deeply, and the queen in me. I always wanted to do something that was reminiscent of that, but it needed to be something that I could relate to. Empire—this is my world, but it’s got a residue of Dynasty.”

Daniels on how Jamal is not going to be the down and out gay character of the series … far from it!”  “I didn’t want the stereotypical gay man up against something, and being a victim.  No, Jamal is coming in and taking it down! That’s just at the beginning, by the way, of what a gay man can do. He is (The Godfather’s) Michael Corleone, and he is his father’s son.”

Daniels on the impact the series is having on the relationship between father’s and sons, in particular after the horrifying flashback scene earlier in the season, which had a young Jamal being stuffed in a trashcan by Lucious (Terrence Howard), after he saw the boy wearing his mother’s heels.: “You don’t realize the power that you have through art, and that lives are saved, and the healing that is done with gay men and their fathers.  I’ve received tons of letters and emails from fathers who have embraced their sons.  It’s crazy!”

Daniels on what to expect in the season one finale of Empire: “It’s just sex, scandal, fights, bloodshed and weaves being torn apart. (Laughs) I wanted to take down those girls—you know, all of those ‘Atlanta Housewives’. There’s a part of that cheekiness in our finale, too.  It’s a hot mess!”

What do you think of Lee’s comment on the soaps and Susan Lucci?  His way of telling Jamal’s rise to power,and to persevere against all odds and homophobia?  Intrigued by what he has to say about the upcoming season finale?  Share your comments below!

I am really loving this show! Had me from the first episode. I love Taraji (Cookie) and so miss her on Person of Interest, but glad she has turned up on this show. She is such a badass and I love her!

showcase black women… and i mean that in the sincerest form

when this season started :

right out of the gate

and now… this spitfire tell it like it is : Taraji B. Henson : “Empire”

how can we not cull from… blow me away

this is just the women.. but they catch me first

yeah, I love that Jamal is not going to be a victim. Instead, he’s a strong man who happens to be gay, and conquers his dreams and aspirations. Loves it. Love Empire.

This show is easily the best scripted primetime drama Fox has had since 90210, and I’m so glad that they’re finding their footing back in scripted drama. Plus, it’s so beautiful to see a cast predominately of a non-white principal cast. I only hope the momentum stays through the first season finale and when the second season comes around.

I agree with ya, Scott. I don’t follow shows on Fox, but now I do.
Last time, I did was the reboot Melrose Place. So, I’m so glad Empire is doing so well, I believe it will have continued success. Oh, hey… Jennifer Hudson is doing an episode, too! JHud!!!!

ditto on the momentum

I will have to check it out!

Yes, it is that good!

Love this show. It would be great if Susan Lucci did a brief cameo.

I highly recommend this show.

Since Lee Daniels has referred to this show as his version of “Dynasty,” just for laughs I like to imagine the role of Cookie being played by Joan Collins.