If you missed the Empire fall finale on Wednesday night on Fox, you should catch-it! While it also gave the hip-hop soap a boost in its ratings numbers, it also showcased the power of three of its series stars: Taraji P. Henson (Cookie), Jussie Smollett (Jamal) and Trai Byers (Andre). 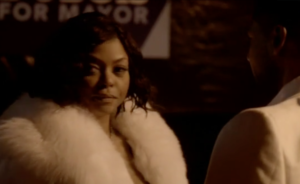 In story, the hour featured a heartbreaking intervention sending Jamal to rehab, but before that, mama Lyon needed Jamal to get it together to perform at The People’s Ball to help her beau, Angelo (Taye Diggs) get elected and garner votes.  After first demanding Jamal turn over his stash of pills, she later finds him puking his guts up and going through withdrawal, and he is late for his performance.  So, what’s a mother to do?  Well, show-off her plumbing skills – go under the kitchen sink where she threw away his pills down the drain – open the pipes up, and get some pills to help him get to the stage!

Later, after Jamal wows the audience he comes off-stage to be greeted by the Lyon clan and company telling him he is being taken to rehab right now.  Jussie Smollett played the betrayal of his family and in particular his mother and sadness beautifully, while Taraji P. Henson throughout the episode proved why “The Cookie Effect” as noted in the episode is in full bloom.

And as for Trai Byers, this season he got to show his acting chops and none more so, than when Andre reveals he suffers from bipolar disorder to Nessa, and he tells her how his late wife Rhonda helped him manage it. Nessa tell him: “I’m not gonna do any of those things for you. “I want you to learn to do them for yourself.”

Next, Andre who has been having hallucinations all season, has one last one, and this one is on the beach where Andre and Ghost Rhonda say their final goodbyes. But before she goes she tells the mentally unstable Lyon: “Promise me you will destroy that bitch that murdered me and killed our baby.”  Andre, in a show of symbolism, tosses his wedding ring into the water.  He then reveals to Shyne that he knows that he indeed liquidated his assets two weeks before Lucious’ assets were frozen.  He then very steely and confidently tells him how it’s going to be from here on out. That he is pulling the strings.  Andre tells Shyne to respect the heirarchy, “’til it’s time to kill my father.”  Andre looks down right scary.  The episode fades to black till Empire returns in March of the new year.

TV Line spoke to executive producer Sanaa Hamri in on what mght become of Jamal and his stint in rehab when the show returns in 2017:  “Jamal having to face pain-medication addiction, it’s a horrific thing. We see the rawness and the truth. It’s the unglamorous side of what a lot of artists have gone through over the decades — from Janis Joplin to Michael Jackson. We see what it does. It’s real. Cookie will do anything to get her son out of that pain, and that’s why she gave him those pills. It had to be addressed, but she couldn’t let him withdraw that severely. She and Lucious and the family all bonded in that amazing moment where Jamal has to go to rehab. He has to go through the program and come to terms with his addiction. And the journey now for him is if he can be sober — and if he can create being sober, which is a whole other thing.”

So, what did you think of the Fall finale of Empire?  What were your thoughts on the performances of Henson, Smollett, and Byers? Comment below!

Michael Muhney Shares Reaction To The Petition To Bring Him Back As Y&R's Adam!

Empire has been excellent, it also holds variety..
It is one of my all time favorites..
I did not the last episode was the final 🙁 can’t wait for the return!!

I am just glad to have another soap on the air even if this one is prime time—the show is very well written and it’s actors are always top-notch.

I don’t like theses people , the acting is expected , no surprises.
Cookies one liners have been funny , Lucius in bed with a rag on his head with his women about to go down on him as his mother walks in with Vaccum. Disgusting.

The show, like Glee, takes its popularity for granted with stunt casting and somewhat generic storylines… most of the time. The thing that bothered me here is that cookie put her boytoy ahead of her son by drugging him up first to perform and then carting his ass off to rehab. I hope the rehab center is not once of those with a grand piano and a gay guy who also likes to sing so this dude gets the trifecta: a new album, a lover, and plenty of counseling sessions where he can break out in song. All three of… Read more »

On the one hand I ike the show. Great acting; talented musicians. On the other hand, it smacks of racism, anfi-semitism. It’s black power message not very subtle from the dialogue to the song lyrics. There ARE friendships and trust both in business and personal relationships between people of every hue and religion but “Empire” only features the bigoted aspect. The family barely blinked an eye when Rhonda died; Andre knew hsr since college. As for the season finale, objectively it was very good. Andre has become a force this season and I’m curious to see where his psychological state… Read more »