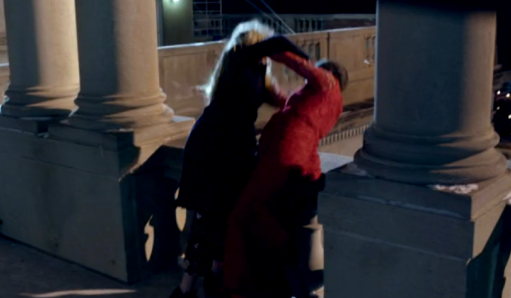 With a very clever play on their season finale promo, “A Lyon will fall”, a member of the family certainly did! They fell all the way to their death! But, who is it?  That is the cliffhanger left for viewers of the hit Fox sudser to ponder till next season!  If you caught Wednesday night’s season two finale you know that things get off to a bumpy start for Rhonda (Kaitlin Doubleday) and Anika (Grace Gealey) and tumbled downward from there.

First, Anika warns Lucious (Terrence Howard) the feds are questioning her about his past, but just then Rhonda busts into the home office and starts choking Anika.  Rhonda lets it be known that she believes that it is Anika who pushed her down the huge staircase and caused her to lose her baby.  Problem is … no one believes Rhonda!  Later, Rhonda tells Andre (Trai Byers) he needs him to a commit a murder for her.  She is clearly losing it.

Even later, Anika feeling no where to turn and in trouble with the feds tries to jump off the Empire headquarters balcony! But it’s Cookie (Taraji P. Henson) to the rescue who actually talks her down in a unique twist given their relationship.

After a huge bust-up of Hakeem (Bryshere Gray) and Laura’s (Laura Calleros) wedding, Lucious devises a quickly plan to marry Anika so she can’t testify against him with the feds.  Cookie is beyond livid and storms off.

Then comes the “quickie” nuptials.  Afterwards, Anika takes a moment for herself.  She goes to the rooftop to get some air, when Rhonda shows up out of the blue and attacks her, and Anika admits she did push her down the flight of stairs months ago! As the duo have the catfight to end all catfights (a Lee Daniels special), Andre happens upon the scene just as we hear one woman scream, and someone falling to her death.

So, who do you think met their maker … Rhonda, or a pregnant Anika? What did you think of the season two finale of Empire? Let us know!

DAYS Deidre Hall On Receiving Her Star On The Hollywood Walk Of Fame: "It’s An Extraordinary Day, and Nobody Does This One Alone, Especially In Daytime!"

THE YOUNG AND THE RESTLESS: Victor and Meredith Liplock! Is The Doc His Get Out Of Jail Free Card?

Rhonda, unfortunately is the character I think they feel is more dispensable. As season finales go, this was a great cliffhanger à la great 1980’s prime time soap cliffhangers.

I agree Joel. .they want that baby drama. .and Ileen Chaiken am EP said in an interview. .you saw how high up they were. .you saw Dre’s reaction so it’s safe to say someone feel and couldn’t possibly have survived it except for the first few minutes of season three. ..watch Andre go off his meds and wreak havoc with his grandmother. ..lmao..Lucious mother telling Lucious..keep squeezing my arm harder and i’ma put my for in your mouth. ..

Someone fell not feel

Foot not for..I need to read before I post sorry

davlestev1 … it’s not your fault…it’s auto spell. Happens to me all the time.

Rhonda is the one who fell. They will NOT kill Anika. They need the drama between Boo Boo Kitty and Cookie. Yes, Andre will go off of his meds. Question: Are we even sure that one of the ladies did the pushing? They want us to believe that it was either Rhonda or Anika. JUST A THOUGHT…. And, we all know that Anika is D-E-A-D after the baby is born. Yayyyy, she is too thristy anyway!!!

I DON’T KNOW… sure they could keep Anika but getting rid of Rhonda seems like a waste of a great character. Anika is one of those characters that seems like she is one note with no real idea behind her. She spent season two and even one as a sideline character with no true direction. Sort of like Claudio, the daughter of the butler, on Dynasty. She was always there but never carried a story and even when given a story never morphed it into something big. Sure, we don’t know who died as the shooting the week before with… Read more »

I thought the whole season was awesome and sure did bring me back to the days of DALLAS and KNOTS LANDING. Television was never the same for me after those nighttime soaps went off the air. Glad to see that someone gave us a new soap that fits this genre!!!

I was surprised that I came away from the final episode feeling as if it was poorly written. Too many new elements and characters were added to move the plot along at the last minute with the thugs from Lucious past life. Rhonda’s reaction in both the first scene and the final were strange. She’s known for weeks about Annika pushing her and yet she made nice at Jamal’s homecoming then in the next scene went bat crazy. I expected more from a Lee Daniels script. There was also nothing of substance between Jama and his new love interest even… Read more »

Yep, I agree Joel, Rhonda. First, they wouldn’t kill two babies and there’s no way if Anika went over her baby could survive. Second, there’s too much drama to be had beween Cookie and Anika who is now married to Lucious. And then there’s Andre who will be pushed over the edge, no pun intended. They never expanded or featured Rhonda enough. Just when she was following in the footsteps of her in-laws her feet went flyin’ over ‘n’ down instead. Lol…zo sad. (Still, I’m not thrilled they sacrificed her. I liked the bond she and Andre ).Show is way… Read more »

Anika is pregnant and involved with the Lions in a betrayal, and she is a bitch now married to Lucious , she will not die ..

goodbye Rhonda …
hey she might survive the fall IF she even fell , perhaps she didn’t go over it was cliffhanger, afterall.

I dont think they’d fake us out on her death twice, AND, they did say one of them was killed.

Sadly, I think it is Rhonda. I really liked her character as she, along with Jamaal, added most of the heart to the show in my opinion. I can’t imagine they’d have Anika marry Luscious and then kill her when there will be so much more Anika/Cookie drama to come. I was hoping they would have Rhonda steak Anika’s baby and run off with her versus offing Rhonda.

Did someone exactly fall? You never really know what’s going on with these networks. One of them could have imagined falling? LOL!