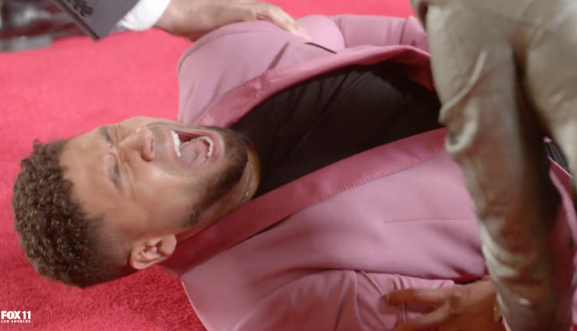 On Wednesday’s night’s penultimate episode of Fox’s hit sudser Empire, the final two minutes had fans talking and tweeting up a storm last night and into Thursday.

That’s because after a confrontation with his father, Lucious (Terrence Howard), where the head Lyon goes as far to say to his son Jamal (Jussie Smollett):  “You ain’t nothing to me, but a disappointment, and the day you die from AIDS, I’m going to celebrate,” all hell breaks loose.  And it is Jamal who ends up taking a bullet meant for his father.

It all goes down at the American Sound Awards (ASA) where Frida Gatz (Bre-Z) finally learns that it was Lucious who was responsible for her father’s death.  As she grabs a gun and approaches him, Jamal intercedes, and takes the bullet instead and is left bleeding on the red carpet.  The episode ends with Jamal being rushed to the hospital and we don’t know if he will survive, or die.

However then on Thursday, Empire  favorite Jussie Smollett took to his Twitter account with these words: I’ve thoroughly enjoyed my time w/ @EmpireFOX. I love you all. Truth. Time 2 make a record & some movies.”  That left fans wondering if this is his announcement of his departure from the series.

Now people are buzzing and trying to decipher if this is a PR move for tune-in to next week’s season finale of the series, or if Smollett has truly wrapped up his run.  The show did well in the ratings last night as well adding 400,000 viewers for the dramatic episode.   However, Entertainment Weekly is saying that the star remains under contract for the third season and will return, although they say they have not received a comment from a rep for Smollett or Fox.

During the airing of Empire, Smollett also tweeted: “This is why we must watch how we treat people. We never know how long they have. Just in the blink of an eye. Gone. #empire”

Watch the final moments of  Wednesday’s  broadcast of Empire below, and a preview for the season finale on May 18th.  Then weigh in:  Do you think Jamal will die?  What did you think of the twist? Will you be devastated if Jussie has left the show? Comment below!

Of course he’s not going to die. And if they wanted to play the will he-won’t he game, they shouldnt have shown marriage scenes for next week’s episode. Love Jamal. He’s my favorite character.

hi Rebecca..
I like Hakeem’s style/singing better than Jamal’s..
Anyways it is the season’s ending cliff hanger, s0-
I know- next season, will be seeing both Hakeem and Jamal..

WOW! what great season close! Now that is drama with a capital D ..

((The brothers will always be, they the stars and both needed – they are Lyon’s family..))

Hi Su…I like Hakeem’s music too. He’s got the whole sexy, funky rap goin’ on. But I kinda crush on Jamal… 😉

Maybe Jamal (Jussie Smollett) is off for awhile while recovering etc and will return later on when he has recovered..
in the meantime; ”’ Time 2 make a record & some movies.“’ for him ..

I have a feeling the vows exchanged will include non-other than
Lucious & Cookie….. Jamal will be fine, bringing the family together
for now…..#brothersstrongbond

The first ten episodes this year were painfully bad. Luscious was behind bars for what, thirty minutes? Tomei’s character didn’t belong. And the compactness of the family conflict is the power to the motor… there was a lack of compactness those first episodes.

But it found it’s legs and it’s been on a roll again. I hope we don’t lose Boo Boo Kitty. Her character development was lacking coherence.

I LOVE Marissa Tomei but I HATED her role! First time I’ve not liked her, I guess it’s a testament to her acting but she was just so severe in look and manner…just didnt enjoy anything about it, including Naomi Campbell’s return.

I liked BooBoo til she went craycray. I want her to pay for pushing Rhonda down the stairs!