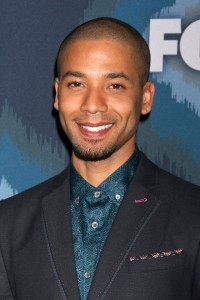 The sudsy drama picks up tonight on television’s hottest show, Empire (9PMET/8PMCST)!  The Fox series from creator Lee Daniels has been breaking all total audience and viewers demo records over the last five weeks.  And last Wednesday, viewers learned that there is a mysterious woman in Jamal’s past (Jussie Smollett) … who claims he fathered her child! But on tonight’s all-new episode this plot even gets juicier!

The woman named Olivia (Raven-Symone) was married to Jamal! Of course, fans of the series have been rooting for Jamal, the gay son of hip-hop mogul Lucious Lyon (Terrence Howard), to rise above all the prejudice thrown at him,have a successful music career, take control of the empire, and have a love life with his beau Michael (Rafael de la Fuente), but this twist offers some new perspective!

Jussie Smollett, who has been one of the breakout stars of Empire, weighs-in on the plot twist with TV Guide.  He related: “They were indeed married. It was all just a sham of a wedding. It certainly wasn’t something that Jamal’s heart was completely in, but it was what he felt that he needed to do and another way that Lucious handled the puppeteering of Jamal early on in his life.”

As to how Michael will react to Olivia’s shocking emergence into Jamal’s life, Smollett previewed, “I think it definitely hurts Michael to hear that, but I also think it hurts Jamal to say that.  He could have said, ‘There’s no girl’ or ‘No, I’m not dating a girl right now.’ He could have said anything. … I think it was just this cluster-beep of emotion that goes through when asked a question like that — that’s so personal even when you’re expecting for that question to be asked.”

So, what do you think about the plot twist that has Jamal once married to Olivia?  Do you think he fathered her child? Share your thoughts below!

WATCH: GH's Ryan Paevey Guest Co-Host THE VIEW & Talk About His Audition For the Role Of Christian Grey In 50 SHADES OF GREY!

Can’t wait for tonight! If it was a marriage sham, then did they sleep together? If they didn’t, then the kid isn’t hers natch, but if they did, who knows? But way has she waited so long to come forward?

I’m loving Jussie as Jamal. What a sensitive and deep actor he is.
Looking forward to tonight’s show.

He not the daddy…Olivia wants a piece of the Empire!!!

Why do soaps think every gay man sleeps with a woman at least once in his life?

Seriously, they never reveal straight guys to have a secret gay relationship in their past.

There are shows that actually do go there…guys who experimented in college “just one time”, etc…