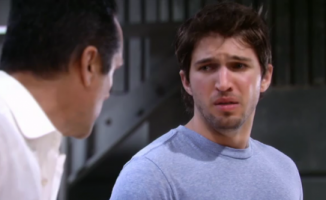 At the beginning of this month, NATAS produced and held the 43rd Annual Daytime Emmys ceremony, which fans of daytime were able to view online in the days following.

During the ceremony, the Daytime Emmys spotlighted in an emotional clip package, on the tremendous achievement of the daytime soaps in taking on and reflecting the social issues of our time.  Throughout the genre’s history they have been known to be at the forefront of telling these types of stories and using their characters as the vehicle to move, enlighten, and inform the audience.

On-Air On-Soaps Michael Fairman was the segment producer of this clip package, and now we are making available exclusively the extended version of the piece here, which includes more scenes and moments than in the shorter version that was played at the ceremony which was cut down for show timing.

From General Hospital’s HIV/AIDS storyline to shedding light on bipolar disorder, to The Bold and the Beautiful’s  transgender storyline and the plight of the homeless, to Days of our Lives, same-sex marriage, coming out, and crib death stories, to The Young and the Restless tackling alcoholism, prostate cancer and more, these stories have touched all of us throughout the years.  These spotlighted social issues are just a small window into some of the great work the soaps have done over the decades, and while we know there are many social issues from shows that are no longer with us, it should be noted that the package was only to include stories from the four daytime dramas left on the air.

Watch the extended version of the Daytime Emmys social issues on the soaps package after the jump.  Then let us know what was the moment, or story highlighted, that touched you the most from it in the comment section below!

Kate Mansi Reveals Her Final DAYS Airdate, And Will Kick Off Special Countdown On Social Media!

GH Summer Promo: Julian Goes Postal On Finn, Liz Plans To Take Down Hayden, Maxie Is Stunned About Nathan's Past!

Why I loves soap!!

Thank you Michael. This is a good reminder of how just how valuable soaps can be – if they want to be! And thank you for including both Chandler Massey and Guy Wilson as Days of Our Lives’ Will Horton.

It is such a shame that soap turned to darkness. What a waste!

All of this shows me one thing Leslie Charleson should have won the Emmy for that storyline and oh my god how I miss Stuart Damon and Susan Flannery!

Soaps operas have the power to change the world! That is one of the reasons I have and always will love the medium of daytime drama.

The soaps are all so good I can’t decide which one is better , the story lines about all these situation and the way the writers show everyone that life is not always a bowll full of cherries and there are many people are going though life with some major things and your not alone.

I enjoyed this very much, but was surprised that abortions were not made a part of it, as this is also an ongoing social issue that is always being fought over in the media and the government. A woman’s right to choose is the most important thing in any woman’s life and this should have been covered as well. Also mental illness, not just bipolar, but split personalities, depression and the like, should have also been addressed in this video as this has also been played out in the soaps over the years. It’s a shame that AMC and OLTL… Read more »

I don’t know if anyone has done anything pro choice on the soaps. It seems to be a politically heated issue that will never go away, and I am amazed they are doing shows about people’s sexuality that bring out the differences from person to person.

My greatest praise to Maurice Bernard, who initially agreed to play a bipolar part, regardless of how it could effect him. Now Sonny has a son in the same position. (This has to be hard to play for both actors) The writers did not just touch on this, but are keeping this subject alive. Millions of people suffer this mental illness, and many of them do not succeed in life, not because they are not smart, but because the disease is one that tries to run your life for you. Then there is the fact that most mental illnesses are… Read more »

Very powerful. Daytime soaps do not receive the recognition they deserve for the top-notch portrayal of these important issues. If they were on in prime time, they would get this recognition. Shouldn’t make a difference.

Nice clip, particularly with Leslie Charleson as Monica! Two other thoughts come to mind: 1. The prostate cancer storyline on Y&R was a joke, in that, as originally written, the delays or lack of treatment was supposed to lead to Michael’s death, which, of course, can happen with this cancer without treatment. The writers changed course. But a major plot point was Lauren not getting her physical needs met. This was an insult to anyone with this cancer, as the health of the patient should be the notable consideration. 2. Just as I have done for the past 2+ decades… Read more »