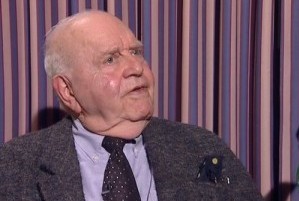 Over the weekend, news that legendary soap scribe Sam Hall had passed away at the age of 93 on Friday September 26th, began to circulate in a very quiet way via his son Matthew’s personal blog!

Hall was responsible at coming in to ABC’s Dark Shadows at a critical juncture in 1967 and giving the Barnabas Collins (Jonathan Frid) storyline a much needed lift where many say he saved the show at that point from cancellation!

Hall was married to actress Grayson Hall, who eventually would find her way to Dark Shadows as s Dr. Julia Hoffman, an eccentric blood specialist who would discover that Barnabas was a vampire!  Grayson died in 1985 at the age of 62.  Sam was with Dark Shadows until 1971.  “I’ll never escape Dark Shadows,” he said in a June 2005 interview. “Never, never!”

Later, Hall joined former Dark Shadows scribe Gordon Russell over at One Life to Live in 1978 and remained a head writer there until 1984.  Gordon and Sam wrote one of One Life to Live’s most memorable story; Viki Lord’s  (Erika Slezak) 1979 trial for the murder of Marco Dane (Gerald Anthony).  During the trial, housewife Karen Wolek (played by Judith Light) revealed, in a heartbreaking emotional meltdown, that she was working for Marco as a prostitute.  The episode earned Sam and Gordon a Daytime Emmy nomination, and Judith Light won the Emmy for Outstanding Lead Actress.  The duo also created the Buchanan family which remained prominent for decades after Hall left One Life to Live.

In January 2014, Sam Hall filed a lawsuit against ABC in New York state court  claiming he had not been paid the weekly royalties he was owed for the showing of  Prospect Park’s online reboot of One Life to Live via iTunes, Hulu and other services.  According to the complaint, ABC made a deal in 1984 with Wildercliff, Ltd. for Hall’s writing services. The agreement was said to have entitled Hall to a weekly royalty “as long as the One Life to Live series is broadcast.”

Hall went on to also write for General Hospital, Santa Barbara and even started his career in the soaps with The Brighter Day!

So share your thoughts on the passing of Sam Hall below  …. and on his contributions to One Life to Live and Dark Shadows!

Michael Muhney Speaks Out And Denies Allegations Surrounding His Dismissal From Y&R!

Fred Willard and John McCook Discuss The Arrival of John Forrester On The Bold and the Beautiful!

Dark Shadows had many flaws in its storylines and unexplained character departures(later explained in tv guide by Sam Hall after shows cancelation) but DS which remains my favorite soap ever was still fun, very entertaining, escapism five days a week!!!

Dark Shadows was so good and I had no idea he wrote that scene for Judith light who rocks!! She is the only reason to watch the Dallas reboot!

R.I.P. ANOTHER REAL WRITER LOST THANKS FOR THE GREAT STORIES !!

Dark shadows was before my time..
but!
I broke my leg and a friend gave me the link to Dark Shadows, full series, I was bored from being down..So, I watched and I could not stop watching!!
I had to watch 6 episodes or more a day..!!
Sam Hall thanks for the best entertainment I could have ever hoped for while housebound, Dark Shadows is truly unforgettable..
You were a phenomenal writer!! Dark shadows will never fade away..

That was good stuff on OLTL! Well done, Mr. Hall.

Thank you Mr. Hall for your contributions to our beloved OLTL. Watching Karen’s courtroom confession gives me chills even today. RIP.

Thanks for some great stories and memories, Mr. Hall! Rest in peace.

Dark Shadows was before my mind, but I remember my mom raving about that courtroom scene and Judith Light for years after it aired. I was a kid when I first saw it and pulled it up not long ago to re-watch it on youtube. It was every bit as great as I remember it. Really, that kind of drama and the build-up to it is really defines what a soap should be. Seems that scene really propelled Judith Light’s career & changed her life. Wouldn’t you love to have THAT on your resume? I wish there were still writers… Read more »

My condolences to the family of Sam Hall. OLTL was my favorite soap opera. He was a great writer and did it with perfection. RIP Mr. Hall.

How lovely to recognize the man who wrote Karen Wolek’s/Ms. Light’s quintessential scene. It may have revealed a sensational topic, but stood for the lack of self-esteem and even self-loathing that so many of us may have had at the time, as did Karen. That’s why our hearts were broken, and we rooted for her, as we secretly rooted for ourselves. We were a nation of evolvement when it came to self-love and Mr. Hall’s writing may have tapped into our collective pain and hopeful evolution. God bless.

The OLTL courtroom scene with Judith Light (as Karen Wolek) is daytime television at its best! I’ve watched the scenes on YouTube (as they were before my time) and they are riveting!

Wow – two great pieces of television art. Thanks for the opportunity to remember.

My condolences to the Hall family & friends. Mr. Hall provided the very best in daytime drama entertainment. Dark Shadows and One Life to Live are my all time favorites soaps. I have many fond memories of watching these shows with my mom & sisters. I started watching when I was pre-K and still remember my sister peeling my fingers away from covering my eyes as Barnabas Collins creeped from the shadows. Ah, sisters. Gotta lov’em.

R.I.P. Sam Hall & thanks for the memories!

How great is it that he was such a big part of two wonderful projects! No matter how old I get, those are two of my favorite shows and those courtroom scenes with Karen are permanently etched in my memories. I always think of that storyline whenever I see Judith Light!