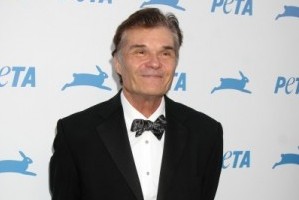 This week, perennial funny man and character actor, Fred Willard makes his debut on CBS’ The Bold and the Beautiful as John Forrester … the never-before-seen brother of Eric Forrester (John McCook).  John is also the dad to the beautiful Ivy (Ashleigh Brewer). So what brought this talented man, remembered for a myriad of roles including in the motion picture Best In Show, and for guest spots on Modern Family to the daytime soap opera?

On-Air On-Soaps caught up with Willard and his on-screen bro John McCook for a dishy discussion on just what is a “John Forrester” and what to expect when he hits the airwaves in episodes beginning this week on Thursday, October 2nd and Friday, October 3rd, and continuing next week on Monday, October 6th! Here are some excerpts below from these gents on the latest addition to the Forrester clan!

Willard on what brought him to B&B: “They asked me to do it, and I said ‘yes’, and then they sent me the script, and then when I got the script, I loved it.  I loved the character.  I wasn’t sure what it was going to be.  First they said, ‘Would you like to come in and work with us on a character?’ And I couldn’t do it at first.  I’d done a pilot earlier for NBC and I was under contract. So then when I called I talked to B&B executive producer and head writer, Brad Bell, and he said, ‘Oh, this is a perfect time, because we’re writing in Ivy’s (Ashleigh Brewer) father, who’s come over from Australia, and it might be a two or three show arc.‘  I said, ‘That sounds wonderful.’ And they explained the character to me, and I said, ‘That sounds great.’ And they said, ‘Slowly, we’ll move John McCook out of the picture!’ (Laughs) They told you that  … didn’t they John?  Oh, I’m sorry!” (Laughs)

McCook on having a quite interesting on-screen brother:  “I thought it was great and clever casting.  It was funny and wonderful.  I just hope that it works out that there is some substantive story in there too, because John is a wonderfully quirky dad for Ivy, and a brother for Eric.  I would love for it to evolve into something really precious for our show.  Who knows? We will see.”

Willard on how he views the character of John: “John is quite a colorful character to play. He seems to be kind of a world traveler, but with a lot of bologna! So I’m sure he makes up half the stories, and he’s probably in love with my own life, and he’s seem to be very fond of his own wife.  He speaks of her very fondly, and his daughter. So I don’t see any bad side. It’s kind of humorous. He’s kind of a harmless guy.  I don’t think it’s a laugh out loud part, but I think there’s a funny scene in the third episode I have. I don’t think it’s turned into a comedy. I play a quirky, kind of strange character.”

Willard on how John views the very successful Eric:  “He probably envy him quite a bit, because he’s got a real job! He try to discourage him from coming down to Australia, but I think when I see the models he works with, and the place he works in, and his friends, I’m quite envious.”

McCook on the brothers back-story: “It would be interesting if we got into their history and what was their sibling relationship like when they were young men.  Did Eric get right into his over-achiever mode back then, or not?  We don’t know!”

Willard on what John thinks of daughter Ivy: “She is very attractive, and a very nice daughter.  There is a discussion in a scene I have about her that references ‘coconuts’!  I am assuming it’s an endearing term to his daughter that she is a bit ‘nutty’ and not meant lasciviously.” (Laughs)

Willard on if he wanted to ever work on a soap opera, and if he ever watched any prior to B&B: “I’ve always wanted to be on a soap opera, because as an actor, I love the way they work! They work fast and each scene is like a little quick one-act play; they don’t beat it to death. The atmosphere was wonderful. The actors who have been on the show couldn’t have been nicer. John McCook kind of showed me through the ropes and all and made me feel right at home.  You know, I watched How to Survive a Marriage, which was a long time ago, and most recently, started watching B&B.  I started watching this when I found out I was going to be on it, and I got interested in the storylines. I got to talk to Scott Clifton (Liam)!  I saw him going to Paris, and I thought, ‘Well that’s nice!’” (Laughs)

McCook on the chance to work with the oh-so-funny Willard: “Here is the blessing: if you are in this business long enough, you get to work with really lovely people, not with everybody.  The longer you are around the more likely it is that you get to work with wonderful people that you admire, and that’s a real blessing for … him! (Laughs)  I don’t know I feel about it!” (Laughs)

Willard on if he would come back to the soap again after his first experience: “They said if I enjoy it, then we could do it again. And I’m sure that means if they enjoy it I could do it again!” (Laughs)

And it looks like Willard is indeed coming back to B&B later this year in more episodes!  So, what do you think of Fred and John’s comments on John Forrester?  Are you looking forward to seeing John on your screens this week?  Share your thoughts below!

MONDAY: The Doctors Debuts On Retro TV! Watch The Brotherhood Of Healing!

I love Fred Willard, he’s so funny and very unique with his approach to comedy. He’s a straight man and funny man all rolled up in one package. He’s been a favorite of mine ever since I saw him in Christopher Guest’s mockumentary, Best in Show.
He’s also a very sweet and kind person in real life.
His appearance on Bold and the Beautiful deserves a look see. I will watch.

How do Maggie Forrester and her daughter Jessica fit into all of this? Was John Forrester the former husband of Maggie and the father of Jessica? If so, I would find it VERY hard to envision a character played by Barbara Crampton being paired with one played by Fred Willard.

Where are Maggie and Jessica? Does anyone ever mention them??

I’m looking forward to the scenes.