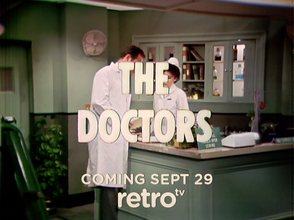 Fans of classic soap opera, tomorrow is not to be missed if you get Retro TV in your area!

That is because Retro TV brings back NBC’s The Doctors with two episodes each weekday starting on Monday, September 29th!

The network will air two episodes Monday through Friday at 12 p.m. ET/PT, and the story will pick up when the show went to color from black and white in in 1967.  As soap fans know, The Doctors debuted in 1963 and ran until 1982!

Now after the jump watch this very kitschy and fabulous promo featuring some of the memorable stars and upcoming scenes from The Doctors!   Are you excited to see some of the classic episodes again, if you get Retro TV in your area? Share your thoughts below!

Fred Willard and John McCook Discuss The Arrival of John Forrester On The Bold and the Beautiful!

Yes, it brings back so many memories, from when I watched the show as a kid.

I wish I could watch RetroTV on my cable system. I could get into following The Doctors. Didn’t really watch it during the original run. Looks like there are many familiar faces.

Thing is; The network will air two episodes Monday through Friday at 12 p.m. ET/PT in the old old days women were home during those hours, but they no longer are.. I would guess– seniors/retired and disabled are the ones home during the day.. that is a the big problem with the soaps is the hours/daytime they are shown.. If they were shown during the evening they would really pick up viewers.. G’ma said, there once was a time when a man was ashamed/embarrassed if his wife had to work LOL .. so yah, they were home during the day… Read more »

Yes and in those days women had their makeup and hair done for breakfast, all dressed up and ready to wait on their husbands hand and foot with martini in hand when they got home. My grandmother used to tell me that a wife had to always “please her husband” whenever he wanted and always had to look good doing it…LOL…

For those pioneers in their 90’s now, they really do not understand the world today… Leave it to beaver was reality back then.

That soothing voice made me jump out my seat when that slap came out of nowhere..HEADPHONES…LMAO

I dont get this channel like i originally thought…wouldve love to seen it again…rare for a soap to have all its episodes…ive watched Dark Shadows and Strange Paradise who have all there episodes but they were supernatural soaps where The Doctors isnt…and its rare for a normal soap that began in the 60s to have all their episodes…Days might be the only other one…GH i heard has a lot from the 60s but some from the early 70s are missing…wish AW and Edge had all of theirs but most are gone forever!!!

jimh, Charles E. posted a link to a YouTube upload of today’s episode of “The Doctors”. Look below!

I get Retro TV where I live, but The Doctors is not shown in the tv listings. I was hoping to see this.

me too, you have to have a local retro station 🙁

I have never heard of The Doctors..
it is very old- 67 to 82.. during those 19 years I was doing important other stuff lol
Anyways.. my comcast does not carry Retro TV .. if it did I would look in and check it out..
All of you who saw it way back then, hope you enjoy it again!! 🙂

I would love to check this out. We dont get retro t.v. as far as I know on dish. I’d especially love to see Elizabeth Hubbard! And who else I might recognize. I only know her as Lucinda Walsh from As the World Turns.

Oh, I wish I got this channel! I don’t think that I do! I love watching old episodes and old shows! I used to love to watch the old episodes of Dallas and Knots Landing on TNT!

I lost my antenna signal, I can’t watch it now.

We do not get Retro, I wish we did. I use to watch The Doctors and loved it. Would be nice to see it again.

For those who weren’t able to see it today!

Sadly, we don’t have Retro TV on my cable system. Would have loved to been able to watch this show again.

Man I wish I had Retro TV, I wish I some of the retro channels in my area would start rebroadcasting some of these old soaps. I would love to see soap episodes from the 70s, 80s, and 90s. That was the great thing about SoapNet back in the day before they went reality on us and eventually died.

Hopefully more classic soap episodes are shown in the future.

i love the doctors. we use to get it 2 times a days but they removed it at 9 and 930 pm. please put it back on at night also. it is so good. how about having a day of nothing but the doctors all day and all night. great idea