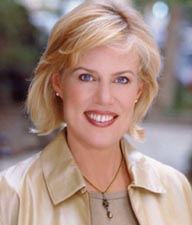 Sad news to report today.  Deborah Blackwell, who was in charge of bringing SOAPnet to the forefront in its original version passed away on Friday after a seven-year battle with Pick’s disease, a rare neuro-degenerative disorder.  According to Deadline.com, “Blackwell passed away at the age of 63 in Virginia, surrounded by family.”

Blackwell was named the cable channel’s General Manager from its inception in 2001 through to 2007. During her tenure, SOAPnet grew its programming slate via a slew of acquisitions of primetime and daytime soaps as well as its distribution as the genre enjoyed popularity.  Deborah brought Soap Center, Soap Talk, I Wanna Be A Soap Star, Soapography, One Day With...” and other series and specials to the all-soap network along with ABC same day and date episodes of ABC’s All My Children, One Life to Live, and General Hospital and later added Sony shows Days of our Lives and The Young and the Restless.

When Blackwell left her post in 2007, there was clearly a shift away from original programming to more programming acquisitions.  It was after Blackwell left that daytime soaps began to lose traction, leading to Disney’s recent decision to rebrand SOAPnet as Disney Jr.

Before joining SOAPnet, Blackwell served as president of Idealab’s MyHome.com, an internet start-up. From 1993-99, Blackwell headed the TV movie and miniseries department of the William Morris Agency, packaging projects with such clients as Whoopi Goldberg, Richard Dreyfuss, Danny Glover, Alec Baldwin and Drew Barrymore. Before becoming an agent, Blackwell was a development executive at Hearst Entertainment, rising from director to SVP.

So what do you think of the news of the passing of Deborah Blackwell?  Do you enjoy SOAPnet in its original incarnation before it became watered down and away from its original concept? Let us know!

DAYS EJ and Abby Continue Their Affair In The Shower! Will Sami Find Them?

Sad to hear about her passing…i miss soapnet…maybe had they kept it like its original incarnation and continued with original programing it might still be with us…i didnt even get Disney Jr., the channel is completely gone from my line up!!!

She sound like a lovely woman who made a great contribution to her industry. Condolences to her family and friends.

I am sorry to hear that Billy Miller is leaving the Y & R. He made Billy Abbott believable and likable despite his many sins. I’ve never seen the original actor, Tom David, in this role. I’ll give him a chance. We’ll see.

That is so sad. My condolences to her family.

The years she was in charge of SoapNet were the best, I loved all the original programming plus having the chance to see my daytime shows at my convenience, to watch again even if I’d seen them earlier in the day. It was a comfort to turn to SoapNet late at night & see my shows again. I am sorry she is gone at such a young age & sorry for her friends & family.

Thank you, Michael, for noting this woman’s contributions and successes. Clearly, Deborah Blackwell was a savvy programmer and researcher and an ally of daytime. SOAPNET was an immediate hit with me and now I know who was responsible for that entertainment and opoprtunities for disucssion and education about the genre.

This is sad news indeed. I repeat what others have said, the first few years of SoapNet were the best. Anyone remember “Disfunctional Family Night”, replaying some of the best nighttime soap episodes. A true champion of the soap genre, may she rest in peace.

Such awful news!!!!! My condolences to Deborah Blackwell’s family.

Sad news. I loved SOAPnet and it was truly at its best under her leadership. She saw the potential and brought it to the fans. She impacted viewers’ lives in a very positive way by bringing great entertainment into our homes. I hope her family and friends find peace and know that her business accomplishments were truly appreciated.

My condolences to Ms. Blackwell’s family, friends and all who worked with her at SOAPnet. While I never knew of her until the announcement of her untimely passing, I am certainly very familiar with her work. I thoroughly enjoyed many of the original shows named above. As soap fan I was pleasantly surprised by what I found when I discovered the existence of SOAPnet and I am confident my enjoyment of that network’s programming is what Ms. Blackwell envisioned as she created original shows for soap fans. If there is ever a Soap Opera Museum created, I do hope there… Read more »

ya,id love watching soapnet.if i missed it.it still be on…