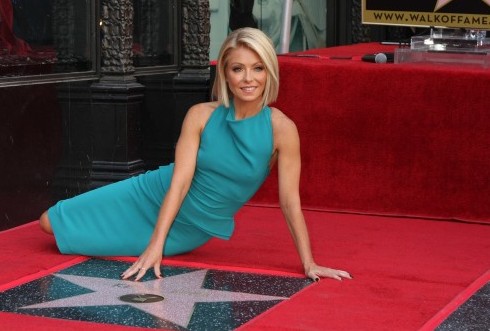 And to think we knew her when! On-Air On-Soaps fondly recalls our early interviews and time together with young acting upstart, Kelly Ripa.  Beginning in the early 90’s, the actress won viewers hearts for her portrayal of troubled teen Hayley Vaughan on All My Children. However, after she left the series in 2002, where she also met the love of her life and future husband, Mark Consuelos (Ex-Mateo Santos, AMC), Kelly moved on to even greater success as co-host of Live with Regis and Kelly, working alongside the legendary Regis Philbin.

Later, after Philbin retired from the series, Kelly kept it going strong with her new co-host, Michael Strahan and has now been a multiple Daytime Emmy winner for her work on Live with Kelly and Michael.  In addition, along the way, Ripa got the opportunity to do a sitcom, Hope & Faith, whole on the homefront raised three children: Lola, Michael, and Joaquin.

On Monday in Hollywood, Kelly received her star on the famous Hollywood Walk of Fame surrounded by her entire family and special guests:  Jimmy Kimmel, Joel McHale, Michael Strahan, and even Matt Bomer!  The actress/talk show host commented on the honor to the crowd in attendance at the ceremonies:  “It all began with All My Children. And All My Children is where I met the man that I’ve been married to for almost 20 years, the love of my life, the man who taught me how to be a person…and we have three of the most beautiful children that I am so proud of on the planet, Joaquin and Lola and Michael,” she gushed.

Kelly also talked about her professional journey: “You have to surround yourself with people that are better than you and that’s what I’ve managed to do in my career.”  She added, “I joined this incredible acting community in All My Children, and it was a brilliant ensemble cast.  Then I got to sit next to Regis Philbin, who taught me how to be a storyteller, and then, I got to work with Faith Ford and Ted McGinley, who taught me how to be funny and taught me about comic timing.”

And as expected kind-hearted and hardworking Kelly finally added:  “I am certain that there are so many more people who are deserving of this honor, but you will never find anyone who is more appreciative.”

Share your congrats for Kelly on a job well-done and her accomplishments in the comment section below! Let us know if you loved her on All My Children back in the day, and if you watch her on Live with Regis and Michael?

The Bold and the Beautiful Welcomes Trio Of Big Brother 17 Stars For Halloween Episode!

She can be as grating as Kathie Lee but i none the less like the woman..and Lola has really grown up.

I agree; I don’t care for her on “Live” and I can’t stand to watch the toothpaste commercials…just appears fake to me. I did like her on All My Children.

She is a class act. Bravo!

I am very happy for Kelly, she has been great on Live.

I am so happy for Kelly. I loved her on the soap & I enjoy her on “Live”. I think Kelly deserves to have a star and I especially love her in Faith & Hope.

I adored amc and miss it. Lola looks a lot like hayley. Do agree toothpaste commercials seem forced. But ice watched her grow with me along the way. As a jerseyite. We’re proud of kelly and her accomplishments.