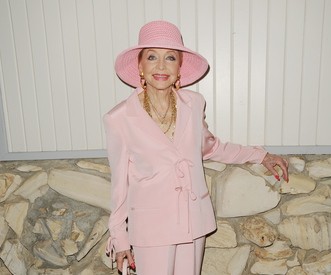 Jeffreys was very well-known to General Hospital fans for her 20 years of playing wealthy socialite, Amanda Barrington beginning in  1984, with her final appearance on the daytime drama was in 2004.

It was revealed in 2013, that Amanda had died off-screen.  Jeffreys also appeared on GH’s spin-off, Port Charles.

In addition, Anne is most remembered to primetime TV audiences co-starring with her husband Robert Sterling, in the romantic ghostly comedy, Topper from 1953-1955 on CBS.

The talented actress also had a career in the theatre singing Tosca at the Brooklyln Opera House, and appearing in the show My Romance on Broadway, and Kiss Me Kate in both Los Angeles and New York in the 40’s,

So, do you remember Anne Jeffreys at Amanda Barrington on GH? Share your remembrances in the comment section below.

THIS IS US Season Two Premiere Sets Series High With Major Revelation On Jack’s Death!

Amanda B was a beautiful socialite. Loved her. She lived a long beautiful life. REST IN PEACE

I so remember Ann Jeffries from “Topper” when I was a kid. And was so happy to see her as Amanda Barrington on GH. She had that wonderful special quality of grace and sophistication that I’ve always admired. God speed Ms Jeffries.

Or Phoebe from AMC!! Lol. Those loony ladies provided lots of laughs!!!

Loved the Kirbys on Topper and Neal the St. Bernard!

Back in the day, I just loved her as Marion Kerby on Topper and was so excited when she came to GH.
Thank you Ms. Jeffreys for years of wonderful entertainment. RIP.

What a lovely lady and actress! Pure class and glamour until the very end! Even into her 90’s, Miss Jeffreys always left an impeccable and effortlessly stylish impression upon her public…her quite youthful beauty and ageless grace were utterly amazing! Professionally speaking, I never failed to enjoy her memorable appearances as Amanda Barrington on GH and elsewhere in primetime. To say her kind of soigne’, sophisticated soap star is a vanishing breed is a true understatement, and a very sad one at that. She will cetainly be missed, but surely never forgotten!

She was so glamorous off and onscreen!

She was beautiful and total class. RIP.

Classy lady! I recall her on GH as Amanda and the actor/character added a lot to the daily storytelling. Glamour, some class conflict, some humor. Applause applause!

I remember her distinctively on GH in the 80s rubbing shoulders with the Qs, in hospital board of directors’ meetings, and with son Derek. but didn’t realize she was on the show for twenty years. I miss the days when GH was able to get an actress of her experience as a supporting player on the show.

Amanda was the epitome of class, although she did dally with Leo at Lorena’s spa back in 80’s 🙂