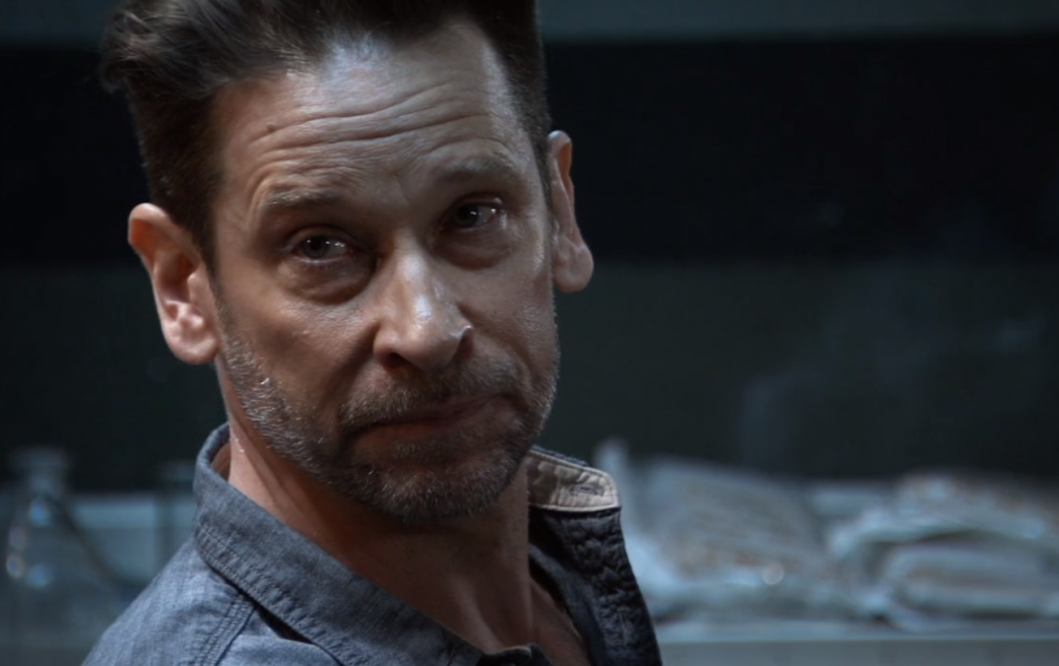 In a stunning turn, which featured great performances by Roger Howarth (Franco) and William Lipton (Cameron), Franco demands to know what’s going on when he walks in on a frightening moment ..  his stepson Cameron has been drugged, and is being held captive by Dr. Cabot (Time Winters) and Shiloh (Coby Ryan McLaughlin) … and he realizes after Cameron speaks the words “flash drive” and “Drew”, that the evil duo wants to use Cameron as the vehicle to implant Drew’s memories!

As Dr. Cabot goes on and on to Shiloh that his experiment should only be performed on an adult, not a child, Shiloh doesn’t give a rat’s ass insisting that Cabot start the procedure on Cameron immediately.  Throughout, Shiloh has a gun drawn on Franco and will use it on anyone else in the warehouse who does not go along with his twisted plot.

Meanwhile, Curtis (Donnell Turner) and Drew (Billy Miller) are trying to locate Shiloh and Dr. Cabot realizing that he could be trying to implant Drew’s memories into an unsuspecting or unwillingly victim.  With the help of Lucy (Lynn Herring), who has been dealing in real estate, they all come to the conclusion of where the men could be hiding out!

At General Hospital, Elizabeth (Rebecca Herbst) is becoming frantic, because she had not heard from Cameron and she can’t reach Franco by his cell, either.  But now back at the warehouse, Franco’s cell has been confiscated by Shiloh.  Sam (Kelly Monaco) is blaming herself for what has happened, and Liz asks Jason (Steve Burton) for help and Jason puts Spinelli on the case.

Back at the warehouse, Franco tells Shiloh to use him instead for the mind-mapping, and to free Cameron.  Franco goes on to say that he has done some apprehensible things in his life, and he had a tortured childhood, and would like to forget about all of that, and convinces Shiloh and Dr, Cabot that he is their best chance at success.   But Franco also had a brain tumor which was removed and had prior brain damage, so could this not work at all?

After his plea, Shiloh finally agrees and unties Cameron and has Franco prepped and strapped to the chair.  However, in the exchange, Cameron is now chained to the fence near the door crying to not let this happen to his stepdad.

In a emotional moment, Franco tells Cameron how much he has enjoyed getting to know him and what a great kid he is.  He then tells Cameron to calm down, because he has something very important to tell him.  Franco says, “Tell your mother I love her, and tell her that I’ll be back.” Next thing you know, Franco is injected to start the mind-mapping procedure.

Now the questions become: Will anyone get to Franco in time before the procedure is completed?  And if so, who might save the day?  Curtis and Drew, Elizabeth, or Cameron, or even someone else?  Will Franco become full-tilt Drew with the former Navy SEAL’s memories? Share your thoughts via the comment section below.

GENERAL HOSPITAL: Franco Walks In On Shiloh and Dr. Cabot’s Plans for Cameron

I haven’t watched in a few weeks. DUMBEST storyline (memory mapping). Disgusted with the blatant nepotism and direction of this show.

Rather than Frodd Redemption-Part 666 they really should have Drew show up and accept his own memories. Since we know Drew’s on his way out the door soon, he might as well be off to settle whatever business he left behind when he was involuntarily disappeared from his own life, by Faison/Helena/whomever (probably with Shiloh’s help)

Drew’s story botched from the beginning. Now TPTB are giving us a double dose of “botch” as they rush the “story” (so-called!) as Billy Miller is out the door. So very bad!

I agree with you! What a terrible story! It maybe good for Roger, to play another character, but not so much for us fans!! He

Well if Satan hates it, it must be good.

Enjoying this storyline as much as possible. Shiloh needs to go!
Great acting. Loved watching Cameron and Franco become Father and son!

Roger and William’s performances as Franco and Cameron were sublime and heartbreaking. What an episode!!

So agree! Their acting was awesome! Just hope Shiloh’s end is soon.

These two actors were marvelous in this episode! I was mesmerized by their performances.

P.S. I hope Shiloh’s time is quickly coming to an end!

So agree with you!

Franco has been redeemed for years. Anyone who has to complain about redemption stories isn’t paying attention. Franco has been consistently remorseful and he did the therapy & behavior modification to become better. He does good because he loves his family and wants to do good. The whole Shiloh story was a giant time sucking annoyance until they dropped Cameron & Franco into it to bring intense emotion and great acting to a loopy plot. Elizabeth is shining now too. And finally DREW gets to have a part in a story he should have been part of a year ago… Read more »

I totally agree with everything YOU just stated. Jasamm are to old. Sam has consistently made a fool out of herself with this hold Shiloh thing. Jason is NO longer capable of thinking on his feet. I LOVED that Liz refused Jason’s offer to go with her and called the police instead. I’m GLAD GH didn’t write Jason saving the day. I’m so ready for the greatest love story ever told to continue to unfold with Franco/Liz/their boys. If written right Franco will be the one to keep Cameron’s head on straight. Liz has always wanted a complete family(child hood… Read more »

While I can’t say I love suspending reality on such storylines, I was super impressed with William Lipton’s ugly crying. He really let go and let her rip! It was believable; not these fake boo-hoo sobs that aren’t near realistic. The beginning of the scene where Franco shows up and some of the dialog were just awful, but once they got into it, there was some fine acting from Roger Howarth and William Lipton. THe other two in the scene were just dialing it in. I cannot wait for the day that they start the “Who Killed Shiloh?” storyline (and… Read more »

I believe Franco will still have his memories and Drews

Could they have had Liz act more like a little idiot today when Franco woke up? Going on and on about him being Franco and not Drew Cain,yada, yada, yada, when she knows full well why he believes otherwise. I am surprised she didn’t jump in bed with him and try to refresh his memories another way.Oh God, give me a break!