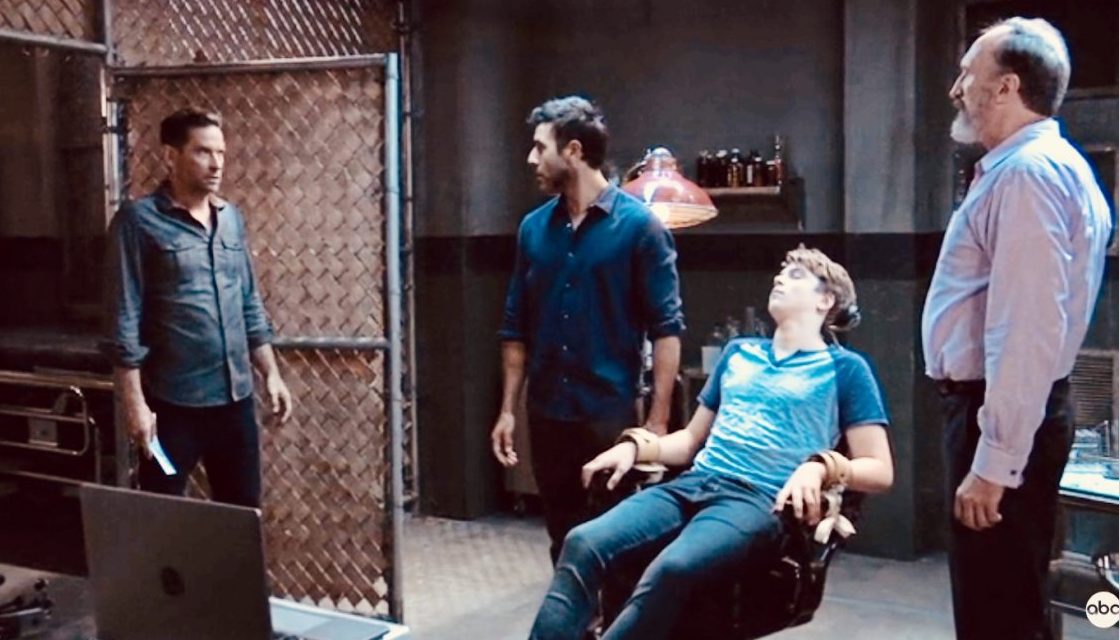 On Wednesday’s episode of General Hospital, Shiloh(Coby Ryan McLaughlin) is ramping up his now very twisted plot; after kidnapping, Cameron (William Lipton) who was out doing his community service, the young teen is tied to a chair in a seedy warehouse.  As Cameron tries to break free and kicks Shiloh, it further infuriates the former, disgraced cult leader, who has one mission on his mind –  to retrieve some vital information on Drew’s (Billy Miller) memory flash-drive.

After waiting for Cabo (Time Winters) t to turn up at the warehouse, when he does, the doctor is not to happy to find out that Jason (Steve Burton) is not there, but instead has been somehow replaced by Cameron Webber! Cabot emphatically tells Shiloh that this mind-mapping experiment was only meant for twins!  Shiloh is not backing down and tells Cabot to improvise.  Then, he blackmails Cabot by telling them they are now co-conspirators … and if they are caught by the authorities they will go down together.  Shiloh also intimates that the information he needs on that flash-drive could set them up for life.

Dr. Cabot informs Shiloh that he is very worried that transferring the memories into someone so young could have dire consequences, as they have never experimented with that before.

At General Hospital, Sam (Kelly Monaco) wakes up to a nightmare from her time in the freezer; thanks to Shiloh.  She is still reeling from what she experienced.  Jason tells Sam that she was just the bait, because what Shiloh truly wanted was Jason, so he could implant Drew’s memories into him.

Elsewhere, Liz (Rebecca Herbst) and Franco (Roger Howarth) where to meet Cameron following his community service duty, but he does not show up.  This alarms the couple, but Liz is more annoyed, because she also has to get to work.  When Liz gives Franco the keys to the car. he refuses to drive Cameron home when he shows up, and says the two of them will walk home, because of the musings of Chelsea (Jen Ray), the psychic, who told him to ‘not take that drive’.

Later, Chelsea shows up where Franco is waiting for Cam. She now has updated visions for him to now, “Take that drive.”  She also says: “It will be an easy decision, but be the hardest thing he’s ever done.”  Franco is now more  worried and confused.

Back at GH, Liz and Finn (Michael Easton) check in on Sam.  It is there that Finn makes a key point, when Jason reveals Dr. Cabot is back in town trying to implant Drew’s memories on him.   Everyone in the room believes Cabot needs twins to make the mind-mapping work.  Finn reveals that is not so;  meaning that someone’s memories could indeed be transferred into someone else’s brain, even if the subject is not part of a set of twins!

In the final moments of the episode; Franco’s dad, Scott (Kin Shriner) phones him to tell him a meter maid friend of his located Cameron’a car and it was parked illegally, and he has the address where to go get the car, etc.   When Franco comes to the address, he goes through the first door, only to hear rumblings and shouting through a gated-second door.  When he walks in, he finds his stepson tied up and knocked out, and Shiloh and Cameron about to proceed with their potentially life-altering or deadly experiment.  Will Franco save the day?  We fade to black.

So, what do you think about Cameron being kidnapped to be used as the vehicle to retrieve Drew’s memories? What do you think Franco will do next?  Will Shiloh ever get his comeuppance, or Dr. Cabot for that matter? Comment below.

GENERAL HOSPITAL: Franco To Cameron, “Tell Your Mom I Love Her … And Tell Her I’ll Be Back”

THE BOLD AND THE BEAUTIFUL: Hope Is Reunited With Beth; And Liam Is The Hero

Surely we will all love Frodd when he becomes Drodd, who now believes he’s a Navy SEAL and has no connection with his actual psycho serial killer past.

Does anyone else remember summer romances, heat in the summer, cliff-hangers? No more! We have the teen scene, boyfriends hired, boring baby storylines, & a boring immigration story. Oh, and a stupid cult storyline that will not end.

Well, Shiloh is history. Kidnapping a kid, there is no redemption for that character. Good riddance!

Hi Timmm ..
I will miss Shiloh !
He is the only character that keeps me awake through all the boring junk..
Hate or love Shiloh he is good character actor has given us great performances.

Shiloh is in the middle of villains, there have been much better but Shiloh is all we got as a Villian in one of the most ridiculous stories/cult junk..
I will miss him..
Who will the next bad guy be?
0ooh there are none they are all monks now..
I wish Franco would get his tumor back!!
I need suspense, intrigue, on the edge story a real thrill and chills !!

This was an unexpected twist. GH is usually so predictible.

Ok..this is the final straw..GH needs some serious writing regime changes from the top to bottom..I have great respect for EP Frank Valentini for all his work in daytime TV but we need a new person in charge if this show is going to be around for more years and entertaining!! ABC, this show this to be overhaul BIGGG time! You are losing long time fans and even younger ones!!

Franco is not a twin but thought he was. Will save Cameron by taking the mind map thing himself.

Didn’t someone (Franco?) also take an LSD trip at one point to save someone too? (oh gosh, I’m not a twin and maybe someone has mind mapped me!) 🙂

When Franco and Nina were in love he took LSD to save her..
that was back when Franco was a great character before Liz killed off Franco’s greatness and turned him into a dull boy..

I can’t wait for Shiloh to get what he deserves! I hate him even more so now than I ever did! Most selfish jerk in the world.

Cameron (William Lipton) that kid has great acting talent.
He will, eventually, leave GH and up his career he will do well. A good future ahead for him once he moves out of GH..

Ahhh Franc0, I miss the real Franco and hope he will get a great story, once again.
I’m gonna love seeing Franco out of Liz’s space and have himself a darker encounter along with his humor, miss his humor and his exciting self.
— I want Franco back–
(this Liz’s Franco is so phony)

This is pure trash. Cameron is a minor. This looked like torture and abuse of a minor. I know Franco will take his place but someone needs to end this and kill Shilow once and for all

Jim
its only make-believe..
Authors and producers do not single teenagers out..
Stephen King uses teens too, yeah know..
It’s fantasy, not real..

Cameron (William Lipton) is a strong actor and he was strutting his acting skills in his scenes, good for him..

Ready for Shiloh to die

I’m one that usually looks for the positive when it comes to GH, and I’m usually willing to give them the benefit of the doubt to let stories play out before I judge them. But I’m beyond over the Shiloh stuff, I really am. And I was never on board with the whole “person’s memories on a flash drive” nonsense. It’s gotten so convoluted and illogical at this point. I think the show is doing a number of good stories right now, but this one has been by far my least favorite. Coby Ryan McLaughlin has done a great job… Read more »