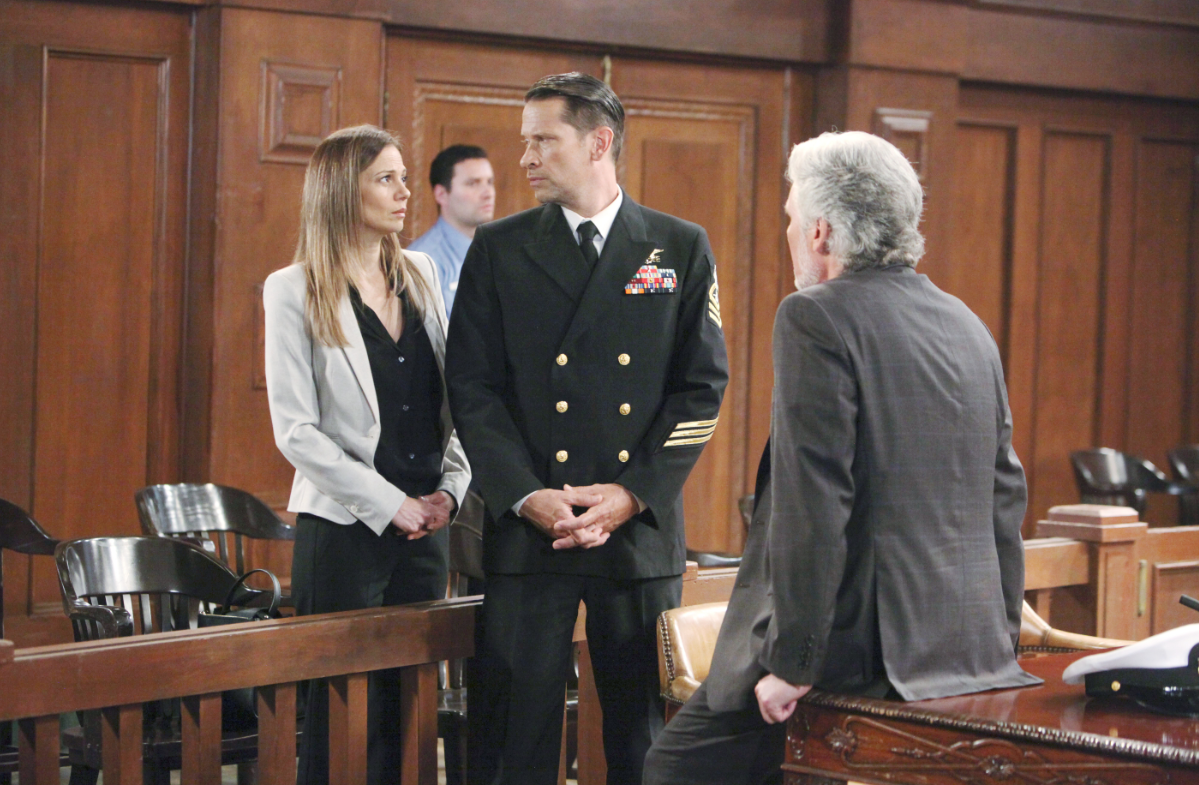 Monday’s upcoming episode of General Hospital should provide the judges ruling in the competency hearing of Franco Baldwin (Roger Howarth) who has been mind-mapped with Drew Cain’s memories.  And if you caught last Friday’s episode, the judges decision will impact several lives in Port Charles.

For instance, Peter (Wes Ramsey) is completely preoccupied with Franco’s hearing and the results and what this could mean for his secrets, lies, and connection to Helena Cassadine to be exposed.

But At the courthouse, Scott (Kin Shriner) continues to pressure Kim (Tamra Braun), about the night she drugged Drew (then Billy Miller) against his will in order to conceive a child.  Kim confesses she did that, but she was driven by grief.  It looks like this Intel was a shock to the new-mind mapped version of Drew.

Later, when Franco takes the stand. his lawyer Martin (Michael Knight) attempts to prove that as Drew, Franco entirely understands his relation to space, times, dates, etc, including his time in Afghanistan; which began July 2010.  Martin tells the judge all of this illustrates that Franco can make his own decisions. 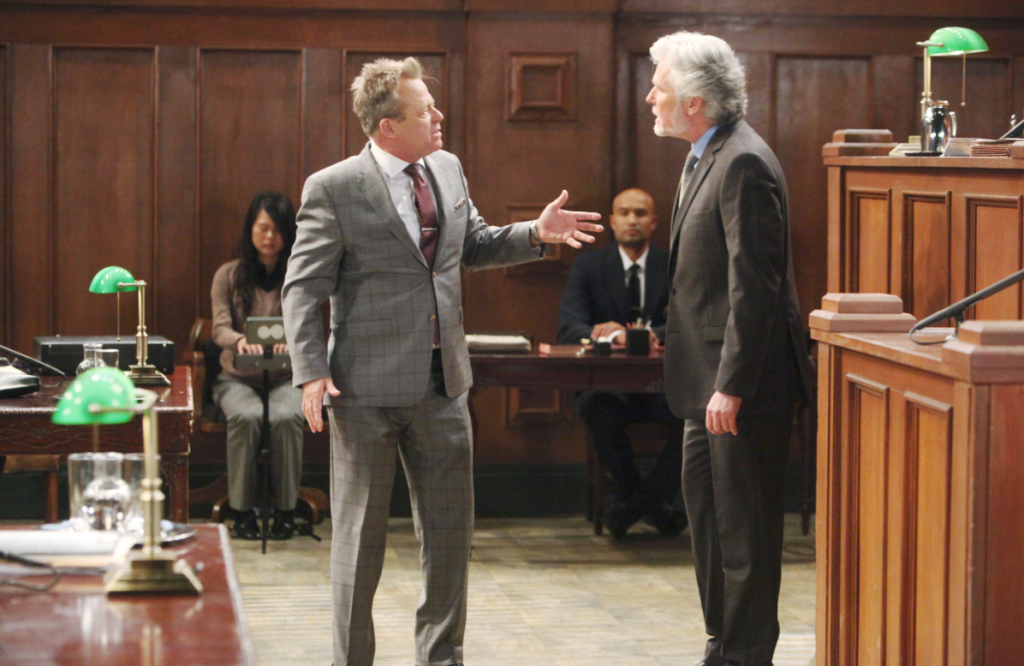 But hold on a minute! Liz (Rebecca Herbst) tells Scott (who is desperately trying to help his son and win this case) that Franco was in Los Angeles and was being questioned by the police for his involvement in the two murders at the MOCA Museum back in July 2010.  Franco says he has no memory of this – although for a moment Franco looks upset about his former life –  but insists he was in Afghanistan at the time.  Scott tells the court this proves that Franco is not competent. 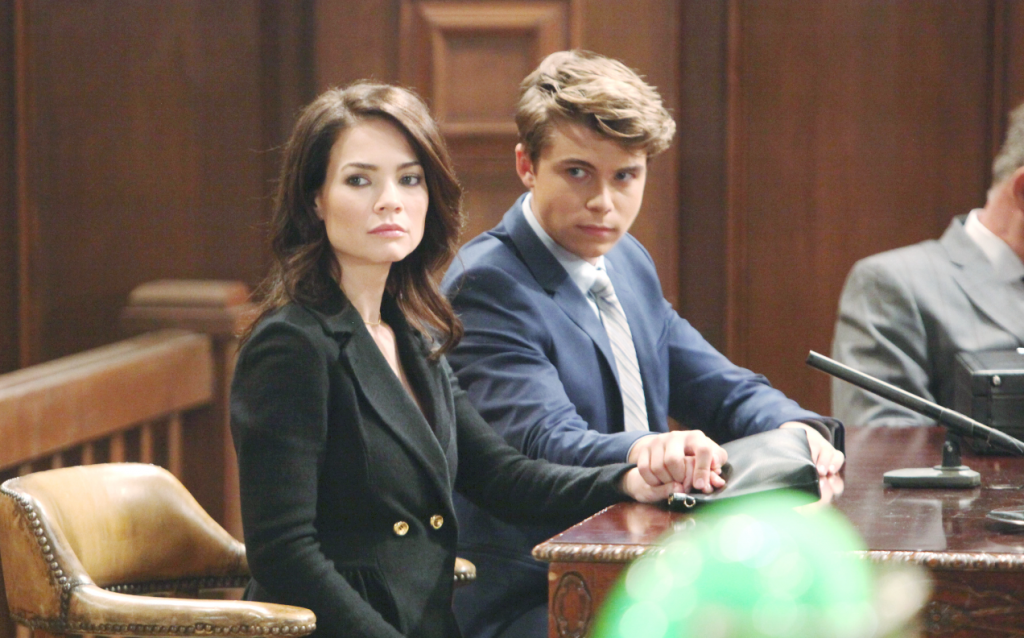 Martin’s medical witness is late getting to the court, but meanwhile, Scott’s witness, Dr. Kevin Collins (Jon Lindstrom) does show up and wants to speak to Scott before he puts him on the stand.  Scott feels that having Kevin testify will be all it will take to prove Franco is not competent, but things take a shocking turn.  That’s when Kevin testifies that Franco meets the legal standards to make his own medical decisions and is in control of himself.

Next, Martin realizes he has got an advantage after Kevin’s testimony without having to have his late witness show up.  Kevin did enough damage to Liz and Scott’s case as one could do. 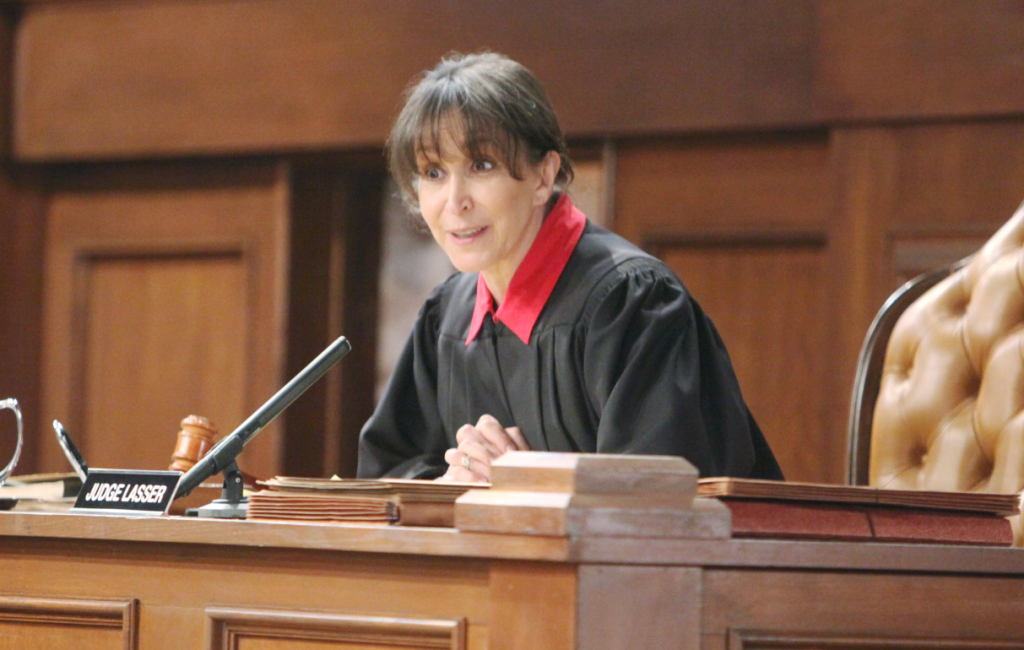 Kim comforts Franco, while Cameron (William Lipton), Liz, and Scott look on as the judge goes to think over the testimonies and render her decision.  Shortly after her exit, she returns to the courtroom and is ready to tell what she has decided.

Throughout the episode, we have to give kudos to Kin Shriner, who through Scott’s eyes, we could feel the ebb and flow of the case, and how he was all at once a lawyer trying to win a case, and a father fighting for the return of the son he loves.

So, how do you think the judge will rule? What do you hope happens next? Share your theories via the comment section below.

Soap Opera Halloween Costumes 2019: Which Character Would You Go As? (Photo Gallery)

There is absolutely no doubt that Franco will be written as the zero personality character Franco, again because the writers are lazy and totally burnt-out to create anything new and exciting. GH is beyong bland, these days. Franco with Liz has totally killed the exciting Franco character and turned him into a nothing. What do Liz and Franco do together, Nothing. Liz is a drain on Franco turning him into a BLAH .. ahaa Liz the man character destroyer she will kill an exciting character off in a month with her boring stale uck of a zero life. I want… Read more »

Scott and Martin were terrific! Who will win? Sorry but I have two theories.

Kim: Her and Drew leave PC, Drew is drawn back to PC for some reason and needs to have his memories replaced. He is about to die and then on Christmas, he awakens with Liz at his bedside and reclaims his identity as Franco.

Liz: If Liz wins, Kim will have nothing and leave town. Tamara is leaving the show so this would be a good excuse for her to leave and maybe someday return.

This Drodd thing is such an over the top steaming pile of dragonshit, I’m almost ready to send Shiloh back up there, because as tedious as he was, at least he wasn’t pretending to be somebody else, and half the town playing along for no good reason.

I was RH’s waiter back in the 90s.
and all I can say is,I think his career didn’t go the way he wanted it to, but, he’s plodding along.
Godbless.
Roger, if your reading this, remember Manatus, those were the days!
🙂