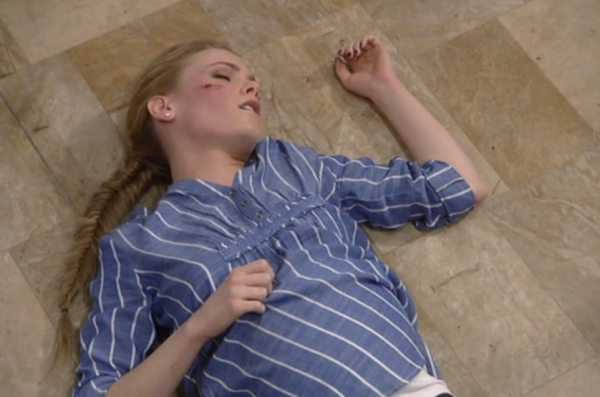 A baby shower turned oh-so-ugly is what went down on Friday’s cliffhanger of General Hospital! The epicenter of the drama is at the Quartermaine’s during Nelle’s (Chloe Lanier) baby shower, perfectly timed for Mother’s Day to boot.

After Carly becomes unglued seeing Ava’s (Maura West) gift to Nelle of a baby mobile with penguins hanging from it on Thursday’s episode, things take a drastic turn on Friday. It all stated when Carly reminds everyone that Morgan loved penguins, and Ava knew that and she using Morgan’s memory to upset her. Nelle acts all innocent, as Carly rips the mobile out of Nelle’s hands, and yells “Screw you Ava!”

Bobbie (Jackie Zeman )defends her daughter saying this is Nelle’s fault. Carly insists to her mother that she’s not losing her mind. Nelle runs out of the room in tears, but viewers she her smile as she hides behind a door, and as Monica (Patty McCormack) rips into Carly!

Later, Carly heads up the stairs to the nursery to speak to Nelle. She tells her she wants to call a truce, but then Nelle reveals a blanket she crocheted. Carly is upset yet again as Morgan had a blanket just like it. Nelle goads her. It is then Carly realizes Nelle is the one who has been setting her up and gaslighting her the entire time. Nelle tells Carly that she is too unhinged to be around her baby. and she will tell Michael all about it as well

After the rivals hurl accussations at each other, Carly confronts Nelle at the top of the stairway. Carly grabs the blanket from Nelle, and the next thing you see is Nelle taking a major tumble down the stairs. At the bottom, Nelle is motionless.

However, if you watch it back a few times, it looks to us like Nelle was actually setting this up and would go so far in her hatred of Carly that she would jeopardize her baby and her own life and stage the fall. What do you think?

Did Nelle just slip and fall? Did Nelle know exactly what she was doing when she orchestrated the fall? Will she press charges against Carly? Will Carly ultimately be put in a straight-jacket and be locked up in a mental instution? Share your thoughts on the latest development in this storyline via the comment section below!