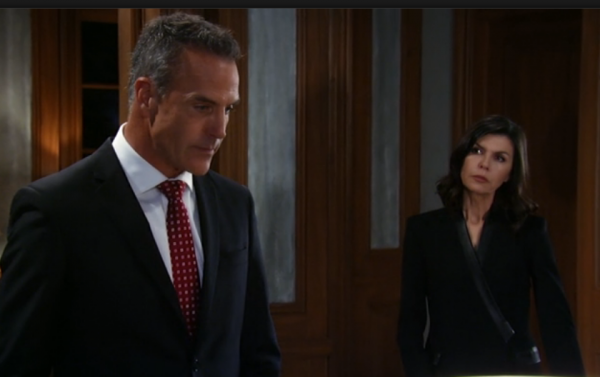 On Thursday’s episode of General Hospital, Anna (Finola Hughes) attempts to get some answers from Paul Horsnby (Richard Burgi) where she accuses him of killing Kyle Sloane (Robb Derringer) and passing his body off as Carlos Rivera’s (Jeffrey Vincent Parise).  Paul admits she’s right.

When she want to know why he murdered Kyle, Paul becomes enraged and upset.  Next thing you know, Paul pulls out a photo of his then young daughter, Susan.  He explains to Anna that Susan grew up getting into trouble in college, and even moreso when he cut her off financially.  After the father/daughter relationship was severed, Susan met Sloane.  And from Paul’s accounts, that led to Sloane physically and verbally abusing Susan, which finally resulted in Sloane raping his daughter.

When Paul found out what happened to Susan he went on the hunt for Sloane, who’d already escaped to Port Charles.  In what Paul says was just pure luck, he answered the phone at the PCPD when Sloane called to arrange a meeting to tell someone he knew who killed Carlos Rivera.  According to Paul, Kyle didn’t recognize his voice and so Paul met him on the docks and shot him dead. Unfortunately, Paul was unaware that Carlos was there, and witnessed the whole dramatic shooting.

Then Paul admits to Anna that he owes Carlos for his silence, and he’s been helping him evade arrest from Anna and Robert (Tristan Rogers).  That way they can’t turn him in and lock him up for murdering Duke.  Anna doesn’t trust Paul, and kicks him out of her home.   He warns him that she is calling Jordan (Vinessa Antoine) to tell her the entire story.  But as she starts to call the PCPD, she looks down at the picture of young Susan and hesistates.

So what gives here? Is Susan really Hayden Cassadine (Rebecca Budig)?  Is this Paul’s true back-story of what went on during the set-up of the original shooting of Sonny Corinthos (Maurice Benard), and the subsequent turn of events which now seem to indicate that Paul was silencing Sloane as retribution for his daugher, not because Sloane had the goods on who really shot Sonny?  What should Anna’s next move be?  Do you think Anna and Paul might end up together romantically, when all is said and done? Share your thoughts in the comment section below!