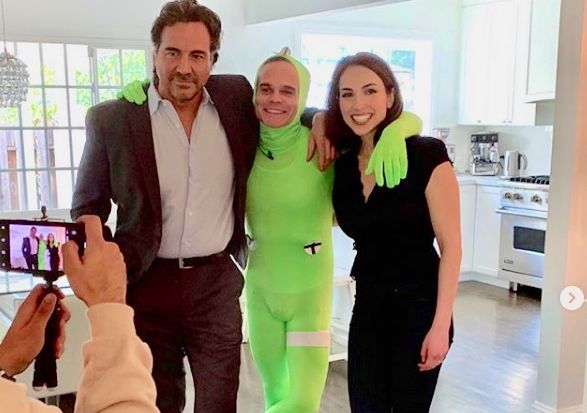 April Fool’s Day started off with a bang today when Eden Riegel (Ex-Bianca, AMC) posted a photo of herself with Thorsten Kaye (Ridge, B&B) and Greg Rikaart (Ex-Leo, DAYS)  in a very intriguing image.  See above pic!  As it turns out, it’s said to be from behind the scenes from some leaked footage of the upcoming Hulu series, Wild Cards.

The premise of Wild Cards is based on the sci-fi anthology series edited by George R. R, Martin, best known for writing the “Song of Ice and Fire” novels, on which HBO’s Game of Thrones is based.  Riegel’s husband, Andrew Miller is the showrunner attached to the upcoming series.

On Martin’s website he teases the set-up of the “leaked” video clip:  “This was not supposed to go public.. Everybody (Well, everybody that has been paying attention knows that we are developing two Wild Cards as a series for Hulu  Andrew Miller has taken the reins as showrunner, a writing staff has been hired, and they have been hard at work for months.  What was NOT supposed to be known is how far they’ve come.  Not only have some scripts been finished, but the first show has gone into production and has been shooting.  That was supposed to be a deep dark secret, however.   We wanted to surprise the world. It’s hard to keep secrets in Hollyweird, however.  And now it appears that some of the rough footage has been leaked by person or persons unknown”

Meanwhile, Riegel sent out a series of tweets: “Hooo boy…cat’s out of the bag! Fans, please don’t judge our show based on these leaked videos!! The effects are going to knock your socks off. And my costars, @Iamthorstenkaye and @gregrikaart, are doing the best work of their lives!”  That was followed by, T”hank you @GeorgeRRMartin_ for the chance to work with you on your first foray into soaps! I am humbled and honored. We won’t let you down.” And then, “I’m probably not allowed to share this with all the NDAs I signed, but damnit I’m just so proud of the #wildcardssoap team!  think we are breaking new ground for soaps. So proud to work with you!”

Now below, check out the Wild Cards “leaked footage” and let us know if you think of the …. um … drama! Comment below.  And one more thing … Happy April Fool’s!

Life never ever stops surprising. I remember Eden Riegel when she was on All My Children and getting kudos as Bianca. I also remember when she went to the Young and the Restless and had to deal with all those haters who wouldn’t stop complaining about her. Now she is working with George RR Martin. This is a lesson for everyone. Be careful how you treat people on the way up cuz you may see them again when you are down.