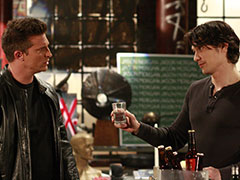 In a new and very juicy tidbit out in TV Guide.com today, apparently when James Franco makes his return to General Hospital, his freakazoid character, “Franco”,  will stage an epic exhibition at L.A.’s Museum of Contemporary Art (MOCA) as part of his ongoing obsessiion with Jason Morgan.

As previously announced earlier this week here at On-Air On-Soaps, GH will shoot Franco’s grand opening on location at the real MOCA and is currently seeking some 200 GH fans to show up and be a part of the shoot.  But,  according to GH head writer, Bob Guza there is so much more to this story. “The name of his new exhibit is ‘Francophrenia: Dissolving the Boundary Between Illusion and Reality’ — as, yes, that’s Francophrenia as in schizophrenia. Franco will create this elaborate dog and pony show for Jason, and Jason’s non-reaction to it will make Franco pull the ultimate trigger.”

But then the plot gets even juicier, when Guza states that even the returning Brenda, Vanessa Marcil, has some ties to “Franco”.   “He will set a trail of breadcrumbs for L.A. that will also lure Dante and Lulu. But he’s pretty much involved with everybody. The extent of his reach will surprise you.”

And fans will find out just how far reaching, when Vanessa Marcil returns on August 11th to add more dynamics to this unfolding story.