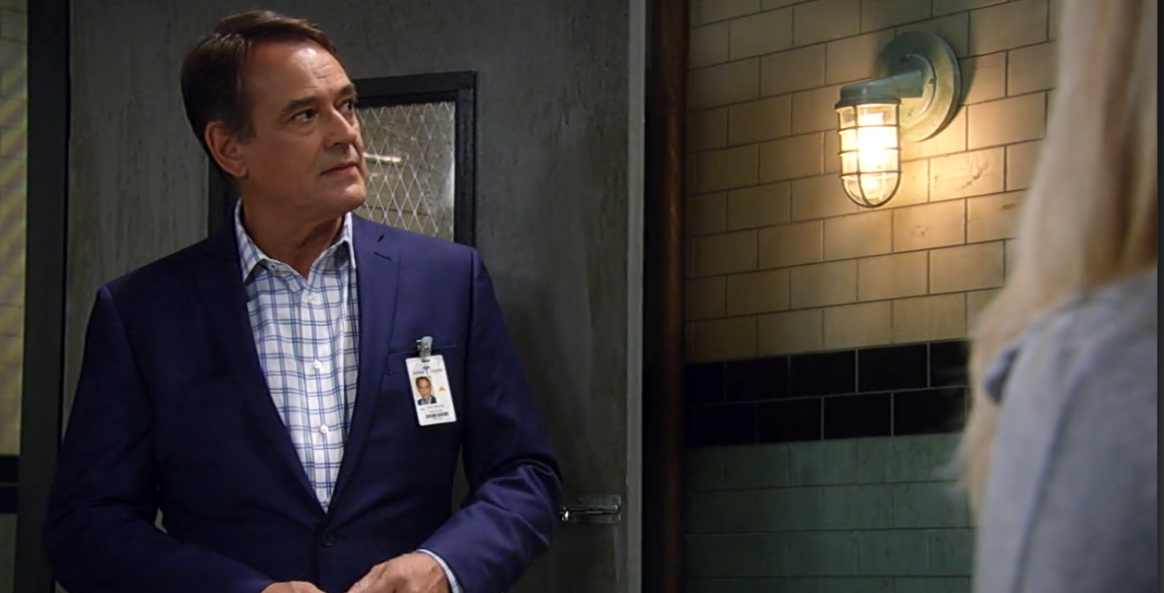 On General Hospital, Carly (Laura Wright) has been hearing screaming and then morse code from the patient locked up next to her at Ferncliff!

While her therapist Kevin (Jon Lindstrom) brings up if the patient has been bothering her, she recently said, “no”.

Who is being held against their will, or are have they been committed to the state mental institution?

Here are some theories being tossed about:  Has their been a switch and Kevin’s twin brother, Ryan is actually posing as Kevin and treating her, while the real Kevin is locked up next to her?  Does Kevin know it’s his brother Ryan who is next to Carly, but will not tell her?  Could a very much alive Morgan Corinthos be next to his mom, Carly while he is having a manic episode and was put away for it?  Is it someone that no one is thinking of?

Take our latest GH Poll and cast your vote who you think is trying to communicate with Carly! Then, let us know via the comment section below, who it will be when it is finally revealed.

General Hospital’s Wedding To Die For: Will Michael’s Plan Succeed Or Be A Major Fail?

|It’s Frank Valentini. Somebody finally realized all the damage he’s done to the show since February 2012, and thought it was time he got locked up. Though I would have gone with the padded cell. That room that Carly is in has too many hard surfaces & sharp corners to be a “safe” place for anybody who is truly a danger to themselves or others.

Ha! Satan, I agree and if this is a damn red herring leading up to yet another new character, or worse yet, Morgan, I will be so damn mad.

I think it’s the dead guy that Sonny buried, Mike unburied, and now Mike claims is under Julian’s bar. The guy just won’t stay dead! Sound stupid? Well, that’s how little I care about yet another Carly-centric tale. I guess it could be a seat, sorry, cell filler for Nelle until she arrives. Or for the fool who keeps chopping off Billy Miller’s beautiful hair and making sweet Detective Chase bury his handsome face under that silly beard.

When this whole idiocy of Croton-on-Hudson surfaced, I jokingly said the body was buried within the walls of Charlie’s. The pub suddenly became the place to be. I questioned it……now, it seems to have become a reality. Well, Soaphound, your idea is not so far-fetched that it could not be true. The mystery person could be anyone. I am not familiar with all the past characters of GH. My guess is Kevin or Laura. But, then, Morgan comes to mind, along with those Zaccara guys. I think the fact that IT is so conveniently right next to Carly’s cell could… Read more »

Ooo, Celia, what if it IS that sexy Dr. Klein who held Jason in that Russian hospital? I really liked the actor, Gene Farber, who played him. He’s no Chase but he was memorable.

As we all know, Soaphound, anything can happen….and most-likely will. Yeah….Gene was hunky, albeit the hottest guy on soaps, today, is Matt ( Griffin)…. my cousin Daniel looks so much like him, it’s scary….especially the nose and jaw-line.
What do you think of this…… is it possible for Julian to suspect something? Does he know something Sonny or the viewer does not know? Is he onto Sonny about the buried guy? Is that the reason for the ‘expansion’?

Celia, I don’t think Julian knows, but it’s kind of fun watching Sonny squirm. Down side: yet more of Sonny and mob stories. Yes, Matt Cohen is insanely beautiful; I wish the character gave him more to work with. Of course you know my heart belongs to Billy M. There’s just something besides the blue eyes, blonde hair, and heart-melting smile. There seems to be, by all accounts, a really good person there, too, and that really turns me on. Probably true with Matt as well. And newbie Josh has the same, decent man quality I admire…and fantasize over.

You are a smart women! I hope Julian makes Sonny crawl! Anyway, in the cell next to Carly, it has to be someone connected to Carly. Yeah, it could be Moron. I dont know who else it could be? Maybe its Uncle Luke? Ha Ha Ha!

Thanks, T…… A notice came up, in pink, LOL, telling me I am posting my comments too close together….in and out of the house, here. I am so strapped for time I feel like FIGARO. Everybody wants me…nonstop….Mom, Mommy, Cee, Aunt CeeCee,Celia, Peanut, ….going nuts here. Ha!! Too many people in one hang-out. I say!! My sisters and brothers are all here, but who do all the kids turn to?…..need freedom!! Even with four sitters and Nanny around….go figure. Can’t seem to catch a breath… Anyway….Julian looks like the Tomcat who just ate the canary. But, Soaphound does have a… Read more »

I think this storyline is tied to Croton too.

I hope that it is Morgan.

WHY? Morgan was the most insidious, horrible little brat I ever had the misfortune of witnessing. He better damn well stay dead.
I hope it’s either Ryan or Kevin.

Yes, Harry….as you suggested I did a little reasearch….Ryan ‘was’ diabolical, and that’s the crux of this imbroglio. The more diabolical a person is, the more believable he/she becomes……too much of a sharp intellect goes hand in hand with the criminally insane. Kevin is Ryan and vice versa.
This is why I don’t think it’s Morgan….too much of an imbecile.
It is up to the writers to give this story credibility and dignity.

PS, Harry…..
Kevin, as the mystery “guest” does make the most sense, albeit, considering her past battle with mental health, Laura looks like a fab candidate…..I said as much days ago.
Yet, I also said that this would be the best opportunity for her to return, sane, trying to ‘decypher’ the change in “Kevin”.
Am I making any sense, at all? LOL.
Shay did say that Laura would see right through the charade.

I have thought that Dr. Collins is acting strange…not at all like himself.

I thought of that, and somewhere I read, it could possibly be Laura, as she has been in an institution before. It sounds like a man’s voice, and somehow I can’t picture either of those women beating out an S.O.S on the wall.

Please, not The Moron Corinthos! Please! No! I think the character may have something to do with Charlie’s Pub/Croton “mystery.”

Maybe it’s the REAL Jason Morgan! Or the real Drew! And the Drew we have is really AJ and the Jason that’s been following around Carly like a puppy is…oh, wait! He must be the real Jason. Forget it.

Don’t know how they could do a Kevin-centric storyline without Laura. If it were Ryan, we’d have more anvils dropping (especially from Felicia).

Who else? Nell’s presumed-dead boyfriend? Tommy Ashford? Bobby Martin (alive after all these years?)

It’s Kevin…remember, he is a cryptographer, so it would make sense that he would try to communicate with a “code”! Why doesn’t he give Carly his name in code?

Maybe this is Laura’s return? She figured out that her husband wasn’t her husband so Ryan locked her up. No matter who it turns out to be, if Ryan was dumb enough to lock that person up next door to Carly “Dog With a Bone” Corinthos, I don’t know what to say.

I will say it is Olivia Jerome

Whoever the person is they need to know morse code. Kevin might, Faison might, doubt if Morgan does. Maybe Anna but why would Kevin hide her. Here is a twist, what if it’s the real Drew??
My guess it is a Kevin/Ryan storyline and the truth will come to light when Laura returns.