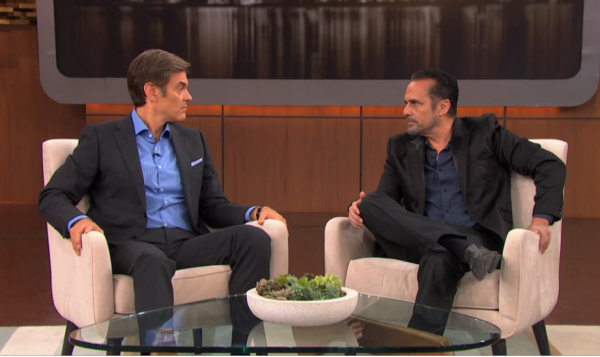 Thursday’s episode of Dr. Oz, featured two daytime performers who have struggled with two different conditions.  The Real’s Tamar Braxton discussed her near fatal blood clot at the top of the show, and then General Hospital’s Maurice Benard (Sonny Corinthos) joined Mehmet Oz for a revealing and extraordinary honest interview about his battle with bipolar disorder and mental illneess.

Throughout his segment, Maurice discussed how he behaved in his 20’s, and contemplating suicide. Later,  he was joined by his wife Paula were they discussed the time when they were rehearsing scenes during the Karen the stripper storyline on GH, and Maurice thought it was truly happening.  In another dark moment from his past, Maurice and Paula shared when he threatened to kill her.   A studio audience member also addressd Maurice.  She shared that after seeing Maurice and Paula on The Oprah Winfrey Show in 2004, it helped her and others because of his courage that helped shed light on mental illness.

Later, the discusssion turned to the current storyline on General Hospital, where Sonny’s son, Morgan has inherited the disorder.  Benard related:  “The thing about soap operas which is great is we have done AIDS storylines, breast cancer storylines, and you can really educate people with these storylines, especially if they are done well.  This particular storyline is me looking at through the eyes of the father, and not going through it myself.  It’s been a beautiful thing to watch this kid (Bryan Craig), who can really do it well.”

Dr. Oz had a surprise for Maurice when he played a special message from Bryan Craig:  “Hey Maurice.  I just want to say that playing your son Morgan on General Hospital had been a very meaningful role to me. Your experience with mental illness has helped me create a character to the best of my abilities that depicts the struggles for people battling bipolar disorder and depression and what they go through in real life.   I just want to say, I couldn’t have done it without you.  You’re strength and honesty is inspiring.  I think you are an amazing role model for anyone who is going through this in real life.  I love you, and I will see you back in Port Charles.”

A choked-up Benard related “I just love helping young actors, and especially when its a storyline that is so personal to me.”  Watch yesterday’s episode of Dr. Oz after the jump.  Then let us know what you thought of Maurice’s honesty and his willingness to put himself out there in order to help educate others in the same situation and more.

Devon Martinez, The Daughter Of DAYS Star A Martinez, Joins The Cast Of The Young and the Restless!

I too suffer from bipoler eps. and had attempted suicide when i was much younger but i NEVER got that bad to threaten someone or harming others…this week i did get very stressed from an animal attack that bloodied my arm, and my sister’s serious illness that i have become very ill and suffering from horrible 3 day headache that doesnt seem to go away…i do get easily upset when i find someone left a mess in the kitchen.but that last about five to ten minutes then who doesnt get upset when they find a kitchen that they cleaned just… Read more »

Thanks for sharing and please continue to take care of yourself

You are most welcome and i’ll try…

Thank you so much for sharing.

you are most welcome…

Thanks for sharing your story. It is so important to ending the stigma that still surrounds mental illness that prevents people from seeking treatment. There is help and I’m so glad you’ve found what works for you. Stay well, my friend.

Thank you very much…kind words are good medicine too.

Maurice was incredibly brave to tell his story. Undoubtably he will help many others. Thank you, Maurice!

It was inspiring to watch this incredibly raw and honest interview. My father has struggled with bi-polar for much of my life and it was helpful to me to see a different perspective of someone who has gone through it.

Love Maurice and I admire his courage and strength in giving a voice to those with none.

He’s so brave. I admire him so much. Maurice seems like a real, big-hearted, down to earth, complex man. His character needs years of tuning an re-tuning, but I have always been able to separate the character from the man. I love his interviews an this one was no different- honest, raw, deep, scary, humorous.

Maurice is a wonderful inspiration to everyone not only those who actually suffer from Bipolar. He continues to be the number one reason that I watch General Hospital every day.

Wow!!! Raw. Real. Revelatory. I hate the character of Sonny Corinthos, but I have absolutely THE highest respect for Maurice Benard as an actor, and as a man. He is providing such a needed public service with his advocacy for mental health awareness, and with his willingness to share what it means for the sufferer and the family to live with bi-polar disorder. It rang so true to me, in every detail, because several members of my family have been bi-polar and the stories are so similar. Thank you Maurice for your openness, your courage, and your profound honesty.

That is a great post. REAL! You have the ability to separate the two. Sorry that your family members deal with this, as well.

I admire his honesty and applaud his efforts to inspire others to seek treatment. So many lives are touched by mental illness in this country; either through personal experience or those of a family member or friend. Most conditions are treatable through therapy, medication or a combination of the two. It is so important that mental illness be treated like any other medical condition. I hope anyone who is struggling will see this and be inspired to seek treatment. I’m so impressed by MB’s willingness to share in the hope of helping others. Well- done!

WOW, so very little feedback about Maurice’s, Oz appearance. I have to figure that there are a lot of Sonny haters/mob story haters BUT you really should separate the two to understand the character of Sonny better. You dont have to like him BUT you would respect him more if you tuned into the Oz episode. I’m not a huge Sonny fan. Dont mind him or the mob. Dont like his family much BUT if you separate the character from the human you would be blown away by what Maurice and his family has been through and respect him as… Read more »

I finally listened to Maurice’s interview on Dr. Oz. What a story. And thank God for Paula and his family. They never mentioned what might be the cause of bi-polar besides genetics. Wonder what else causes it? Also, are outbreaks like Morgan is exhibiting typical?