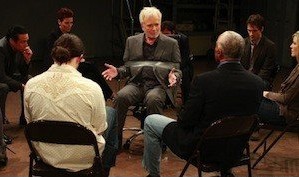 The 64th annual Directors Guild of America Awards got underway tonight in ceremonies in Los Angeles at Grand Ballroom at Hollywood & Highland.  The awards are presented each year by the Guild for Outstanding Directorial Achievement in Television, Feature Films and Commercials. And while many of the categories are still being presented, On-Air On-Soaps can tell you that in the Daytime Serials category, General Hospital’s William Ludel and his directing team have won for Luke’s intervention episode!

The much heralded episode aired back in April of 2011, and featured mesmerizing performances by Anthony Geary (Luke), Jonathan Jackson (Lucky), Jane Elliot (Tracy) and many others.   Geary explained the unique concept of the episode last year when he told the press, “The whole show is in one set. There are flashbacks involved, but they’re used in a very unique and creative way, a way in which I’ve never seen before. We go in and out of reality and not fantasy, but [something else.]”

Jane Elliot also revealed at that time, “It’s like theater. This is done stylistically. It’s a very gripping episode, visually. It’s also very simple. We’re in a circle with folding chairs. Luke is paired up with his children -Lucky, Lulu and Ethan.  Sonny, Carly, Nikolas and [my character] Tracy are also there.

Ludel’s win for GH bested some heavyweight competition from Larry Carpenter of One Life to Live, for Viki confront her altars , Casey Childs of All My Children for Who did JR Shoot? The AMC Finale,  Mike Denney of The Young and the Restless for Diane speaking from the grave, GH’s Scott McKinsey for Liz and Siobhan’s car accident, Cynthia Popp of The Bold and the Beautiful for Brooke Berry, and AMC’s Angela Tessinari for Jesse tells Angie the truth about the baby switch.

Congrats to William Ludel and GH for their win!  Do you think the DGA got it right? Let us know!

SAG-AFTRA Merger Approved by Board of Directors! Member vote next! Stars respond!

That was a great episode from top to bottom, the acting, the set, the camera work, everything, so a very well deserved honor. If GH was smart, they’d submit that episode for the Emmys this year.

i really think it should have been a tie between luke’s intervention & jesse telling angie the truth about the baby switch………………….

that was good on all my children when jessie was telling angie the truth ,and when the baby was born dead ,that was some drama ,and how they changed the babies ,I love angie and jessie when angie saw jessie at the train station,they were good characters together,they will be missed,in pine valley, I cant count the many adventures those two went through,kept me glued to my seat ,all my children you are missed.

They got it right…it was gut wrenching at times, almost had to turn away…now thats good drama in the afternoon!!! Love GH anyway, any how! I hope it can be saved. ABC can cut those 2 new shows of theirs. Couldn’t find a less likeable group of hosts!

Yes, for once, an awards show got something right. The episonde was like theatre, yes, and did much with so little. Refreshing when stunts and over-the-top presentation attract the most attention.

even though general hospital has been boring ,this scene wasnt ,I liked the way it was done ,duck tapping luke down and one by one everyone tells him about his life and being drunk through most of it ,however I never liked that they made him the person responsible for the death of elizebeth and jasons son,I never liked that the baby was even killed in that way,or any way at all, took me back to when brooke lost laura by another drunk driver( all my children) I can understand the story going to ,drinking while driving,it has to be… Read more »

This was such a powerful storyline–whew!

Yes, this was one of the best episodes of the year, I even saved it to watch again!!! So moving, excellant job William!

I think it was a close call between GH’s intervention scene and the Jessie and Angie confession scene. Just the thought of the anguish Jessie and Angie would be going through if it were real life. But I have to admit, I’ve always loved Anthony Geary’s work and this piece was exceptional on everyone’s part. Pray they at least keep GH around, because the heart break of loosing ALL my favorite soap is too much to bare.