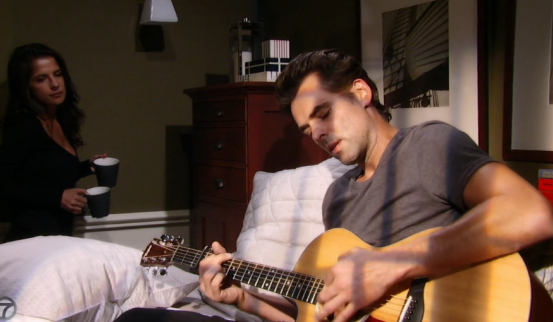 If you caught Wednesday’s episode of General Hospital, the show opened up with a melancholy Patrick Drake (Jason Thompson) strumming his birthday gift  …  an acoustic guitar.

The gift was given to him by his current lady love, Sam (Kelly Monaco).  Earlier, Sam turned down Patrick’s marriage proposal saying she is not ready quite yet and that the timing was bad.   Sam related she had to through the next few days, because it would have been her and Jason’s (Billy Miller) fourth wedding anniversary.  So with that, Patrick wrote a new song on his brand new guitar, while Sam was remembering Jason as she went through a box of their shared belonging.

As Patrick sang the song, which contained the lyrics: “I can’t tell you what hurt first.  The regret of my question, or the truth in your words.  Love has shown me there’s always an open door.  So be careful what you wish for, ” Sam overheard the good doc singing it, and noted its content.  The tune was also played over the action of other scenes at the beginning of the episode.

Many fans took to social media since the episode aired asking Jason Thompson whether or not he penned the tune that he sang? And the answer was a resounding, “Yes” as he clarified on Twitter.   Today, Jason posted the lyrics to the song which is entitled “Sailor Short on Wind”.

So, what did you think of the song and it’s lyrics? Did you enjoy seeing Jason sing on GH again? Do you think Patrick should be more upset with Sam turning down his marriage proposal?  Share your thoughts below!

DAYS Reveals The Identify Of The Necktie Killer!

The song is okay but Jason isn’t much of a singer and needs to stick to acting.

I actually like the intonation of his voice. He is better than a lot of bellyachers out there who pose as singers. And, I do love his hair.

The song was a nice touch and made for an effective opening. I think Patrick’s reaction has been appropriate and, happily, has not been written in a cliched way. Jason Thompson is so good in the role – really natural and completely believable.

I think Robin needs to come back!!

Only if they have a new actress who can make a commitment to GH. Get tried of Kim coming and going because of her other career ambitions.

As much as I love KM – would have to agree with you on that one!

Amen Rose! Nothing against Kim, go for it but dont let GH suffer!

1st-
Jason Thompson is awesome. I really liked his singing/his song.
2nd-
Sam & Jason are horrible together / aweful.
They are total bore and I had need to FF them, and I never FF …lol

(also- Patrick is quite tall, Sam not much taller than his daughter Emma/heels off..
They look creepy together, yah know what I mean) ufta!

Great stuff, su0000! I may not always agree with you — this time I do — but you are always entertaining, and your enthusiasm is unparalleled! Best to you!

The way he’s been acting lately, when I saw him with the guitar I expected to hear Dr Drake sing,”I am Woman” by Helen Reddy.
All kidding aside, the song was very nice.

I hope Billy Miller can sing!

I hope so too.

Good one, Harry! With it being GH, we know it wouldn’t be another Reddy hit, “Peaceful.”

Since we’re getting to know who Jake is very soon it’s funny how Sam can’t commit to Patrick. I’m guessing she’s going to find that out real soon too.
I don’t like when actors write and sing on their soaps.
Frisco however was so different.

Wow, terrific lyrics! Funny, Shay and I were just talking about the lack of A song on a soap like they used to do on soaps in the 80’s. [“Lady of my Heart”, ode to Felicia from Frisco.] Its nice to see and I couldnt help but see Dr. Noah Drake in that scene. Patrick and Noah really could pass for father and son and I’d love to see them perform together. Some of the fans complain about the mob element and want the hospital in GH to return. Well, hire Dr. Drake as Chief of Staff.

The lyrics of “Sailor Short on Wind” are profound & poetic.
J.T. did a really beautiful job on the song.
I enjoyed his sincere performance. The song suites mood & atmosphere of
what was going on between Sam & Patrick.
Sam, as always looked beautiful & compassionate.
I love the dynamic between these two engrossing characters.
(Don’t get how anyone would call them boring!
I’ll miss Samtrick with J.T. & K.M. When they’re over!)