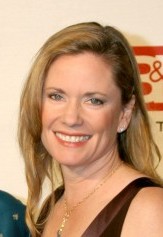 The Bold and the Beautiful’s Joanna Johnson (Karen) is one busy gal between her producing gigs for primetime shows while trying to squeeze in some time for her and Crystal Chappell to play some story as B&B’s first same-sex couple, Karen and Dani!

In a new interview from TV Guide Magazine’s Michael Logan, Johnson discusses what she deems “Her Gayest Year Ever”, since she is also writer and executive producer of ABC Family’s new series, The Fosters, (premiering Monday at 9/8CT) about two two lesbian parents, one played by former One Life to Live and Sunset Beach favorite, Sherri Saum.

Johnson says she is trying to find time for a return to the CBS soap amidst the launching of her new series!  Here are a few excerpts below:

Joanna on her year as executive producer, soap star and coming out publicly:  “It’s crazy, right? My world is so wild these days. (Laughs) I’m definitely calling this “My Gayest Year Ever”! It was just over a year ago that you and I sat down and did the interview for TV Guide Magazine where I came out publicly.  Then there was the lesbian storyline on B&B and then The Fosters shows up in my life. The same day my last show, Emily Owens, M.D., got cancelled I started getting emails from friends saying, ‘The Fosters is perfect for you!” They needed someone to help the creators, Peter Paige and Brad Bredeweg, run the show — and who better than me because this show is my life! I’m married to a woman and we have two adopted, multi-racial children. (Laughs) It’s the same story!”

Joanna on an imminent return to B&B:  “Brad Bell (EP and head writer, B&B) and I are talking about my returning for a really fun story in July when The Fosters has wrapped for the season. I really do miss B&B — both the people and the news. I went to the GLAAD awards a while back with Crystal Chappell and Linsey Godfrey (Caroline) and found out that Karen’s daughter has turned into a total badass crazy person since the last time I was on the show. I couldn’t believe it! [Laughs] Clearly, I need to come back. That girl needs some mothering!

So do you hope Joanna makes it back to film new episodes of B&B this summer? Will you check out The Fosters? Let us know!

REPORT: Labor Issue Between Prospect Park's All My Children and IATSE On Certain Episodes?

Days of our Lives Scores 18 Month High In Key Demo! Moves Ahead Of GH In Latest Ratings!

That’s great, glad she will be back with Crystal Chappell!

I look forward to Joanna returning to B&B!

I can’t wait for JJ’s return. That also means more Crystal Chappell on my screen too 🙂

I have been waiting for this! I have continued to watch B&B even though they dropped this SL, just hoping JJ would find time to return.
I am also looking forward to the premiere of The Fosters tonight on ABC Family. I loved Sherri Saum on OLTL.

It’s too bad the actor that portrayed emmet on queer as folk is one of “the fosters” showrunners. That show was really racist. Its only Asian american char during its season1 was a japanese prostitute who could only speak japanese for 1 episode. While all of the chars were white of course and majority of them were rich. There was even an episode on season1 queer as folk w/c had its lead char bryan be w/ an African american. The kisses between them was only implied and never shown to the audience w/ how it was filmed. Yet bryan was… Read more »

Could “the fosters” get a lot of backlash like the cheerios commercial? The backlash for the cheerios commercial shows that there’s still a lot of hatred from white people towards racial minorities as a whole and especially towards racial minorities who are romantically paired w/ white people and have children w/ them. That was only a commercial and yet there was all this hatred towards it. The hatred towards the commercial is most probably bec white males get twice as angry when it’s a white woman with a racial minority man because of racism and misogyny. These white males who… Read more »

I thought the Cheerios commercial was cute.

Keep the gaye storyline off the show. We all know what happened to As The World Turns and Guiding Light. I also didn’t like her as Caroline.