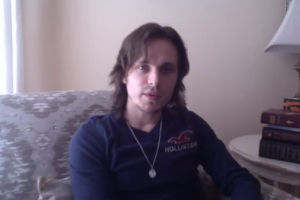 Five-time Daytime Emmy winner, Jonathan Jackson has been sorely missed for General Hospital’s 50th anniversary celebration, since Lucky Spencer did not make an reappearance in Port Charles.  Jackson,who  is currently starring on ABC”s primetime musical drama Nashville as Avery Barkley, told On-Air On-Soaps recently about attempting a return for the golden anniversary of the soap opera, “We tried, even up to this point for the actual airing of the 50th anniversary, but we weren’t able to make it work.”

However yesterday, Jonathan posted his very own heartfelt congratulatory message for General Hospital on his band Enation’s You Tube page, where he discusses his humble beginnings on the show playing Tony Geary (Luke) and Genie Francis (Laura) son, and the journey he has taken because of GH.  Here is an excerpt of his video message below:

Jonathan Jackson:  “I was 11 years old when I started in 1993.  Being placed with Tony and Genie, it was just incredible. It was such a gift for me. I’ll carry their influence over me for the rest of my life. To the crew, to all the directors, and producers, and writers, hair and makeup and wardrobe…over the years,  General Hospital has been like a family to me and I’m so excited for everybody there to get to celebrate this incredible, incredible milestone.  And I want to send all my love to everybody there, and to all the fans who have watched over the years, thank you very much for being part of this incredible journey. I am just very humbled and grateful to be a part of it. So here’s to 50 more!”

Watch Jonathan congratulate GH with his own video message after the jump! Then let us know what you thought of it? And, if you wish Jonathan were back as Lucky for the celebration?

GH Head Scribe Ron Carlivati Reveals Moment Between Bobbie & Felicia Honoring BJ/Maxie Story That Did Not Make It To Air!

"Welcome To The Nurses' Ball" Available On iTunes! What Did You Think Of Part One Of GH's Big Musical Event?

You will be missed at the celebration at the GH Nurse’s Ball. You deserve to be there and at all the talk shows celebrating the 50 years. Best of luck on Nashville, but we miss you as “Lucky” and want you back.

Thanks Michael! He is such a sweet guy and seems very grateful for all opportunities. I was so hoping that he might have been one of Frank’s surprises and showed up with the Luke/Laura/Lulu/Ethan scenes. Maybe he still will…

was so hoping he was under that sack and not Ethan. Now, that would have been a surprise!

JJ may not have made it for GHs 50th but id still welcome him or any vet back for future visits to Port Charles, anniversary or not!

As I’m reading this message from JJ, I’m watching him on the GH marathon and the Liz rape s/l. What a coincedence, fitting and appropriate. They say soaps is a great training ground for actors, like going to school, College for it. Well, if that’s so, then this storyline was the midterm and finals for it. JJ crying as he’s telling Luke what happened to Lucky and RH expressing her shock and disbelief. They were babies and yet showing such depth and range. Not to mention TG’s and JZ’s performances. Never gets old, watching those scenes…wow! Love Jonathan Jackson–talent galore,… Read more »

I mean what happened to Liz.

Love Jonathan Jackson as Lucky. There has been no better acting team on Daytime TV than Anthony Geary and Jonathan Jackson. When these two were in a scene together it was pure magic to watch. Both of them wear their emotions on their face and speak volumes with their eyes. May GH be with us for many years to come. CONGRATS

Of course we miss Lucky. he was one of the few characters I didn’t end up disliking. him . He did get a drug problem, but he was always Lucky. Sorry to see you couldn’t return but I am very happy he has a role on prime time. The only reason I even watch Nashville was because he is on it.

such a talent!!! This guy should be on the big screen.

What a great message! We all knew JJ has such fond memories of GH and quite the connection to Genie & Tony…which always brings so much more to their scenes. I hope when Nashville is on hiatus, JJ could come back for a few weeks to touch base as Lucky with Luke and the much missed Laura. I read that Frank Valentini wanted to create an environment that the actors would WANT to come back, even if it’s for just one day, a few weeks, or a new contract (paging Lynn Herring!). I think he has largely succeeded. During the… Read more »

I love Jonathan….. I just wished that he would somehow make time in his schedule to VISIT GH on occasion, especially with Tyler Christopher (Nickolas) back, and Ethan. I would have JUST LOVED to see that family show with Lucky, Nickolas, Lulu, and Ethan with FINALLY, Luke and Laura…… What a treasure of a photo that would be. I was also hoping to Jonathan would ” Pop Up ” for the Nurses Ball. I can’t believe he couldn’t find it in his schedule to slip away for a day or so. Please SHOW UP ON GENERAL HOPSITAL while the family… Read more »

I miss Lucky so much,but am starting to warm up to Avery,if only he can behave!!!Love JJ!!!

jj you will be missed on general hospital.. ever since you left I have not watched gh. please come back