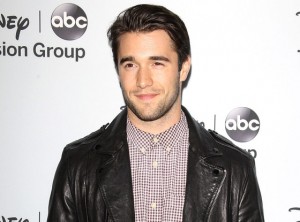 Earlier we reported on the dramatic final scene on last night’s midseason finale of ABC’s Revenge!  DO NOT READ ANY FURTHER, IF YOU HAVE NOT WATCHED THE EPISODE YET.

As the show promoted someone would die … and in the end … it was Daniel Grayson played by Josh Bowman who would take bullets meant for Emily (Emily VanCamp) and meet his maker!

Actor Josh Bowman spoke exclusively with EW.com on how it was to tape his final moments, and how it all came about that showrunner Sunil Nayar and the writers crafted Bowman’s exit story, especially when Josh had been quoted, or misquoted, as saying he wanted out of the ABC soap in the Hamptons.  Here are a few excerpts from the Bowman exit interview below!

Josh on departing the series and his request to leave the series:  “I think I was definitely wrongly quoted by that particular reporter. It wasn’t a plea to leave the show at all. I mean, I love working on the show. I’d do it for six seasons. I had a sit down with Sunil at the beginning of this season, before the writers were in the writers’ room, and we just discussed my character and the arc, where he could go, where he shouldn’t go. We thought it was very important to have him be redeemed and have some sort of heroic last act for Emily. We thought that would bring the character full circle considering where he’s come from. We’d lead him right back to where he was in season 1. By having him save Emily and sacrifice himself, it was the perfect, fitting end for the character. Sunil and his team of writers did a fantastic job. As actors, you always just want what’s best for the story. I think, collaboratively, for the show, we thought it was a good idea to have a domino effect moving forward. It’s not a good thing to leave a show, but it’s a good thing for the story to help move it forward.”

Josh on how his last tape day went: “Sad. It was very sad. I didn’t think it would be as sad as it would be, but it really pulled on my heartstrings a lot. I’ve grown up on this show, really. It’s been four years. I’ve made some amazing friends. Honestly, it was very difficult. It was difficult to leave the lot as well for the last time.”

What do you think about Josh’s comments?  Was it it a fitting conclusion for the arc of the character of Daniel Grayson? Let us know your thoughts below!

James O'Halloran Wins The Price Is Right Male Model Search! Could Soaps Be In His Future Like Predecessor Rob Scott Wilson?

I guess I’m a sentimentalist. I was hoping Emily and Daniel would finally get together for real. To me that would have been fitting way to rise above all the Grayson BS they both had had to put up with over the years. Oops…what was I thinking…a happy ending?

I wanted Emily and Daniel together too.

I don’t know…as I said on the other post I LOVED Daniel..and for me it’s a great loss as far as the show goes. To me he was the heart and soul…I felt empathetic toward him during his relationship with Emily. He really loved her and tried so hard to be the perfect boyfriend. She completely took advantage of him when in essence he had done nothing wrong to harm her or her father. I do believe she did fall a bit in love with him…but rationalized her feelings away. I loved his connection to his sister, to Margeaux (sp?)…how… Read more »

Hey rebecca1….you leave “Patrick” alone!!!! He needs to come back alive and well to reunite with both Nolan and Victoria!!!! No death scenes for Justin Hartley, please!!!!! ; )

Well you may just get your wish…perhaps he’ll come back to console his mother. However, if I had my druthers, he WOULD have been the one to say adios! Not because I don’t think he’s gorgeous; he is. But I wasn’t invested emotionally in him…and that is precisely the reason why tptb didn’t choose him.

It was definitely a sad and shocking way to write the character off, but I would’ve preferred for Emily to end up with Daniel when the series ended. Jack is just too boring for Emily.

Great ending for Josh but sad for us as we won’t see his gorgeous self anymore! Josh was a great actor as well! Never once did I hear his English accent creep into his dialogue.

Huge Loss! Best of luck to you Josh!

I’m going to miss him. But, this being a soap, I hope they bring him back some day. I wouldn’t mind at all.

LOL..This isn’t GH! We saw him bleed out and die. He’s dead/dead!

However, Rodd…he will be back in flashbacks…so we do get to see his adorable face again.

I am stunned….. AND I thought he and Emily are dating in real life?

Hi Elite Advisors…yes, they are dating in real life.