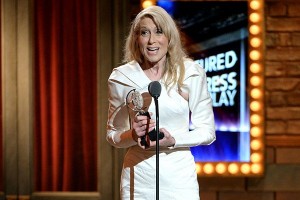 Fantastic news last evening!  Judith Light, the former two-time Daytime Emmy winner for her iconic role as Karen Wolek on One Life to Live, took home her second consecutive Tony Award in ceremonies held at Radio City Music Hall in New York City and telecast live on CBS! ( except on the West Coast).

Light took home the prize in the Best Actress in a Featured Role in a Play for her performance in The Assembled Parties!  Judith won in 2012 in the same category for her role in Other Desert Cities! The Assembled Parties continues on Broadway till July 7th, in case you have the opportunity to catch Judith in it in the Big Apple!

After her second consecutive Tony victory Sunday, Light spoke to the press backstage where she related to the L.A Times, “I was terrified to come back to the theatre. I needed to prove to this community that I mean it, that I really want to be back here. I’m doing such different plays, I’m such different characters, but the overwhelming experience is one of real appreciation. The result of this is this ongoing, really, love affair between me and this community.”

Of course, one of the high points of Judith’s Tony win was getting to listen to her acceptance speech where she thanked her husband, Robert Desiderio, whom she meant when they both starred on One Life to Live, he in the role of Steve Piermont, and her long time manager, Herb Hamsher, and paid tribute to her fellow nominees and much more.  Watch Judith’s acceptance speech from last night after the jump, and let us know what you thought of it and her Tony victory?

Monday's All My Children: Has Colby Driven a Wedge Between Celia and Pete For Good?

So happy for her! I have loved her in every role I have seen…

She looks great, and congrats to her!

I hope everyone who ever disses actors that got their start on soaps takes notice of what great talent does come from that genre.

judith light what a terrific actress. she won another tony again. i had a feeling she would win again. judith is classy sassy and very pretty for her age.

What a lovely lady… what a talented actress…what a great acceptance speech!!!

She’s a class act, always has been…she deserves every win she gets.:)

What a classy lady. Congratulations Judith.

I know her only from DALLAS, but congrats for the win!