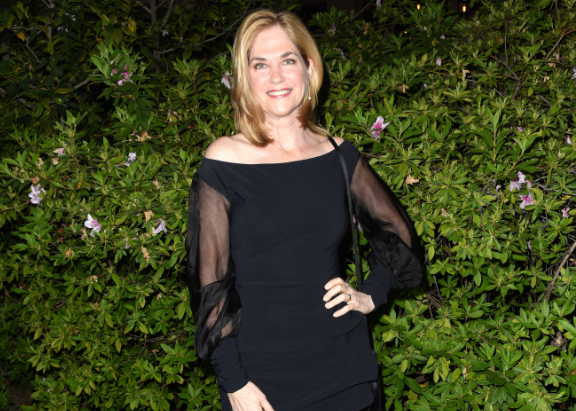 She has been an enduring favorite on daytime dramas from her work as Blair Cramer on One Life to Live and General Hospital, her time as Chelsea on Guiding Light, and of course, her most recent popular role as Eve Donovan on Days of our Lives. Actress Kassie DePaiva in the process has made whole lot of fans and now as the holidays draw near, she took time out to post a special shout out and love letter to the fans of soap opera.

Detailed with it, is DePaiva confirming her upcoming departure from the NBC soap opera.  But as fans of the long-running series know, just because a character makes an exit, doesn’t it mean they won’t return sometime in the future, whether they are in story dead or alive!

Kassie expressed: “Thank you soap opera fans for all your love and support.  On New Year’s Eve, once again, Eve Donavan will leave town after wreaking havoc.  I just want to send a big love letter out to all of you that have watched and supported me over the years.  As you know, I love working in Daytime.  It has been my honor and pleasure to work on Days of our Lives over the last five years. Eve is an interesting and challenging character to bring to life.  As you know, actors don’t get to write their own storylines.  It is always a challenge and a delight to open the scripts and see where the writers are taking the story.  My hope is that you enjoyed the journey because I certainly did. I wish all of you a Joyous holiday season. Be kind and loving to all.” 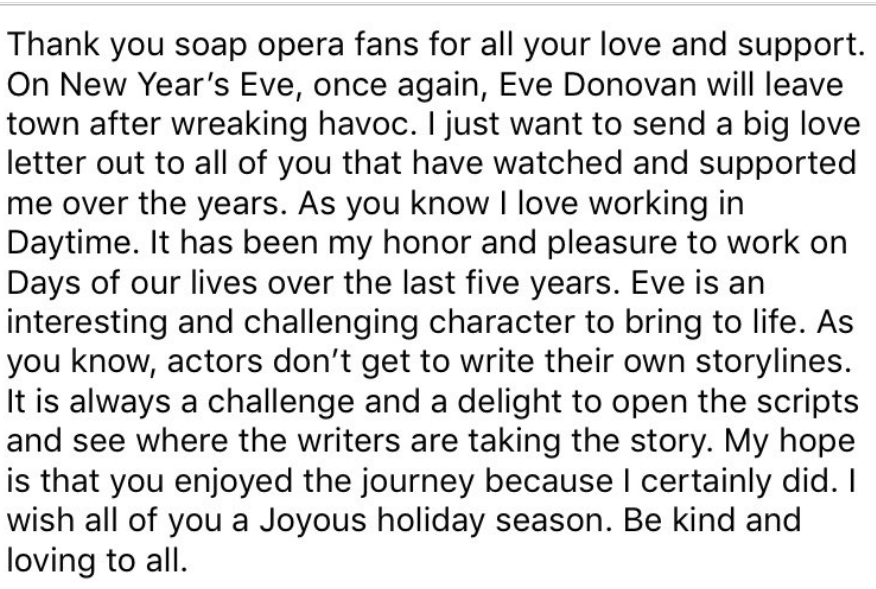 That will never happen! And all the cast members have moved on.

Highly unlikely! You have a better chance seeing her turn up on General Hospital!

I know Kassie has her fans, but let’s be honest.. she was never believable as Eve Donovan. I’d really like to see the REAL Eve return one day, but let’s hope the departure of FauxEve is a permanent one.

I agree. Charlotte Ross is the one and only true Eve Donovan.

Kudos, to Kassie
She knows when the writing is on the wall, and sent a coded message to her fans Satan!
I hope the real Eve for you appears to say goodbye, ’cause days is in the can, just like Oprah.
just sayin
viewer88

Eve’s gone. Eric’s gone. Sarah’s gone. And I know there will be more to come. At least i know how DAYS got the one year renewal when they were supposedly cancelled. Yeah, they’ll save alot of pennies but we lose with the good talent written off. Probably would have been better if they had left the show as a “gone but not forgotten” thing. I’m sad for the characters and the actors who play them

Sarah’s in the preview next week (hugging Xander), and Eric is coming back at some point too.

Kassie DePaiva is an extremely classy lady and an absolute joy to watch.

Thank you Kassie for sharing your tremendous talent with all of us. I wish you and your family joy and peace always.

i miss Todd and Blair

Love your character on Days. Wish you weren’t leaving because you & Brady make a great couple. Best of luck & Merry Christmas

Please correct the spelling of Eve’s name in in this article. It is not Donavan but rather Donovan.