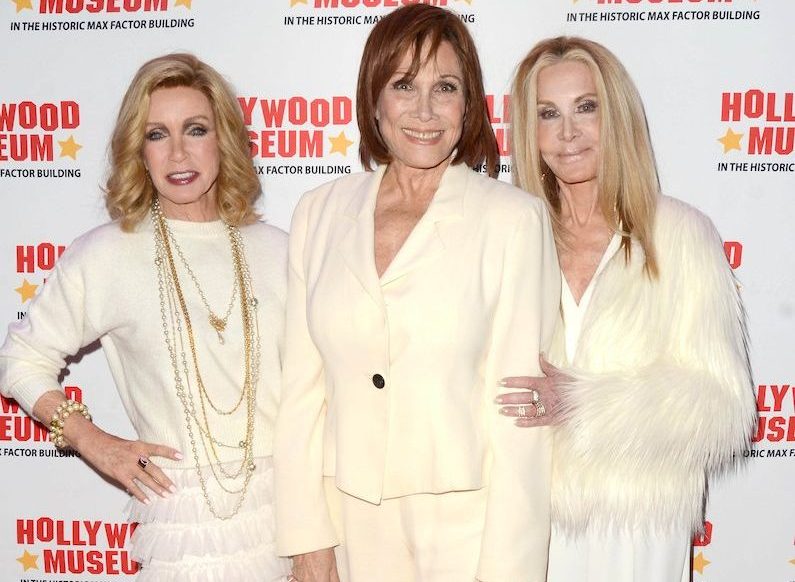 The celebration for the 40th anniversary of Knots Landing and its iconic series stars: Joan Van Ark (Val). Michele Lee (Karen) and Donna Mills (Abby) continued last Saturday night when the Hollywood Museum unveiled its first Lobby tribute of 2020 with costumes worn by the three actresses who brought the drama to the cul-de-sac at Seaview Circle.

Knots Landing ran on CBS from 1979-1993 and through all the romance, affairs, drama, corporate intrigue, and social issue stories of the day, the series remains an all-time favorite for viewers worldwide that consistently say how much they miss the show and hope for a reboo,t or even to see old episodes again on a streaming service or DVD box-set.

During the Hollywood Museum opening ,(after their appearance on the red carpet for the press) Michele, Donna, and Joan each took turns on the podium, (inside the lobby of the Museum near their iconic clothes from ‘Knots’) to share a few words for invited guests about the show, working with each other, and how touching it is for people to still remember their work from the primetime soap.

Before the ceremony began, Michael Fairman got the first look at the costumes with the ladies and their real-time reactions to the exhibit with some fun back-story on their wardrobe during the series run in a special video interview.   You can view below as well as the Michael Fairman Channel on YouTube.

Now check out the video conversation with Joan, Michele and Donna, followed by some photos from the night in our gallery.  Check out who else showed up in support of the fabulous trio … then share your comments below!

Donna Mills, Michele Lee, and Joan Van Ark hit the red carpet.
GH's Carolyn Hennesy showed up to celebrate with the ladies from 'Knots'.
Donna Mills, along with former "Angie" and "All My Children" star Donna Pescow, along with Teresa Ganzel.
''Happy Days'' favorite Anson Williams congratulated the "Knots Landing" trio on its 40th anniversary.
Michele Lee strikes a pose as everyone remembers her stellar performances as Karen Fairgate MacKenzie on 'Knots'.
The one and only Leeza Gibbons.
'Poor Val" herself .... the amazing Joan Van Ark .
Y&R's Kate Linder (Esther) showed up for the Hollywood Museum lobby exhibit opening for 'Knots' too.
Donna Mills always stunning and remembered as Abby Ewing on 'Knots".