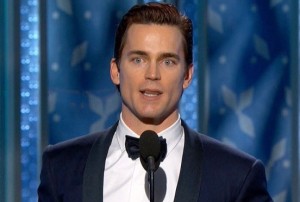 There were a few former daytime soap notables, as well as one of the best performances in a primetime soap that were among the honored performances tonight at the 72nd Annual Golden Globe Awards.

Matt Bomer, (Ex-Ben, Guiding Light) took home the Golden Globe for Best Supporting Actor in a Series, Mini-Series or Movie made for TV for his work in HBO’s The Normal Heart!  Upon accepting his award Bomer thanked gave husband Simon Halls and their three children – Kit, Walker, and Henry – saying, “I want to thank you for putting up with me when I was 130 lbs. and really grumpy when you ate pizza in front of me.”   And in one of the ceremonies most touching moments, Bomer related “To all the people we lost from this disease (AIDS), I just want to say: We love you, we remember you.”

Julianne Moore (Ex-Frannie/Sabrina, As the World Turns) won a Golden Globe  for Best Actress in a Motion-Picture Drama for “Still Alice.”  In one of the most acclaimed performance by an actress this awards season, Moore gives a heart-rending portrayal of a vibrant and ambitious Columbia University professor diagnosed with early-onset Alzheimer’s.

Downton Abbey’s Joanne Froggatt took home the Globe for Best Supporting Actress in a Series, Mini-Series, Or Motion Picture Made for TV.  On season four, Anna Bates was brutally raped, and in her acceptance speech Froggatt related that she felt a strong sense of responsibility to rape victims when she had to tackle the storyline in season four that saw her character suffer a sexual assault.   After the episode aired, the letters the actress received from women who have endured rape touched her deeply, Joanne said. “This is something very removed from what I usually do for a living,” she said. “They are probably the most special letters I’ve ever received in my life.”

Tell us what you thought of the victories by Matt Bomer, Joanne Froggatt and Julianne Moore and the victory of Transparent ? Well-deserved, or were you rooting for someone else? Comment below!

Kristen Alderson On Her Decision To Leave GH: "Posting A Video Very Very Soon To Explain Everything."

Joanne Froggat did an absolutely superb job as a rape victim in Downton Abbey. No one could have done it better. I am thrilled she won. The writing was exceptional, but Mrs. Froggat’s body language, intonation, and facial expressions showed what life was like back then when women thought even more than now that they were somehow at fault. Anna was afraid her husband might find out who did it, the fear in her eyes and shame, etc. were palpable.

So proud of ex-soap stars Julianna Moore and Matt Bomer. Well deserved! Joanne Froggatt did an amazing job on Downton Abbey, Kudos to the winners.

Michael, you forgot Gina Rodriguez as a former soap notable. She was Beverly on B&B. She won Best Performance by an Actress in a Television Series – Comedy or Musical

So great seeing Matt Bomer from Guiding Light and Julianne Moore from As The World Turns winning the major awards this year.

I read that Matthew Bomer will be the lead on the new season of American Horror Story along with Lady Gaga this fall.