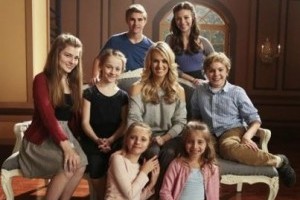 Mom must be so proud!  Fantastic news today from The Hollywood Reporterabout Maura West’s (Ava, GH) son, Joe West!  The young performer has been cast in NBC’s  upcoming live production of The Sound of Music!

The three-hour new live production is based on the original 1959 Broadway production of The Sound of Music, which starred Mary Martin and Theodore Bikel. The play won the Tony Award for best musical, with Martin winning for best actress. The 1965 Sound of Music film adaptation starring Julie Andrews and Christopher Plummer went on to win five Academy Awards, including best picture.

So, what do you think of Joe West landing a plum role on this very special live production of The Sound of Music? His career is certainly taking off!

Justin Hartley Speaks On Playing Gay On REVENGE & The Future For Patrick & Nolan!

Who Would You Cast In The Role Of Josh Williams On The Young and the Restless?

HUGE congrats to Joe on landing this gig! Taking after both his mom and dad. Bright, bright future ahead of this kiddo! I cannot wait to watch and support him, and all other cast members!

I see the hatchet fights of Ava and Carly developing!!! EXCITING!!

(I really hated the sound of music, yuck ) but the best for him ..

I can not believe they are doing another Sound if Music!!! ORIGINAL IS THE BEST!!!! Don’t ruin it NBC. LAME LAME LAME

You would have never have seen it onscreen as the “original” production was on Broadway with Mary Martin. Plays are meant to be seen often so new audiences can appreciate them. Without new productions, they would become obsolete & no one would hear the wonderful music from generation to generation. Be happy when your favorite movies & musicals are remade & broadcast again. It can only be a positive thing since new viewers quickly become new fans.

Dr.O from GH shouldve been added to the cast and sang…

Some movies are classics and perfectly done the first time around. No remake is necessary for The Sound of Music.

This will be a television production.

yah, Jared..
The best were the originals–
Halloween and Chainsaw Massacres, for two .. What followed really stank lol..
Sound of Music belongs on Broadway, only ..

Yes, the original SOM is the best, but I’ll watch and give this version a chance.

He is to be congratulated for his achievements at such a young age! How proud his mother must be! Congrats young man, and WTG!
I can’t wait to see it next week! After watching the making of program tonight, it looks like it’s going to be amazing! Carrie Underwood is an amazing singer and will do Julie Andrews proud!

I knew I was seeing a future star when Joe took the stage in Sleepless in Seattle at the Pasadena Playhouse. Keep up the great work!