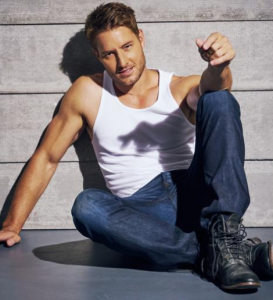 Let’s just call this as we all see it! Y&R’s Justin Hartley (Adam Newman), who is soon to be seen staring in the new NBC series dramedy This Is Us, is in some serious shape and Men’s Fitness knows it, too!  So, the almighty Hartley’s rockin physique has been selected by Men’s Fitness to be included in ther 12 Fittest Guys Of (New) Fall TV!

When speaking of Hartley’s character of Kevin in This Is Us, Men’s Fitness relates on their pick: “Ironic that his character is a TV sitcom star who struggles to be taken seriously though he is forced to spend most of his screen time shirtless? Hartley makes this conflict believable—and also funny. ”

Hartley’s This Is Us cast mates: Milo Ventimiglia and Sterling K. Brown also made the ’12 Fittest’ list!  And so do did, The Great Indoor’s Joel McHale, Timeless star Matt Lanter, Pitch lead Mo McCrae, former telenovela star, Alfonso Herrera who will appear in the TV remake of The Exorcist, Clayne Crawford of Fox’s Lethal Weapon, Adan Canto and Lamonica Garrett from Designated Survivor, Daniel Sunjata from Notorious, and MacGyver’s Lucas Till.

So which of these dudes do you think will clock more episodes shirtless during the fall primetime season? What do you think of Justin’s selection to the primetime physique club? Share your thoughts on Men’s Fitness picks in the comment section below!

Cast Talks Y&R's 11,000th Episode Milestone: Lauralee Bell Shares,"On Behalf Of My Parents, This Was Their Dream Come True, And It's Still Going On."

GH's Emma Samms On Not Being In Cast Of DWTS: "So Sorry To Disappoint. Not Entirely Sure How That Rumour Started!"

Some people ( men and women) are just born beautiful. However, when there is no personality or intelligence the beauty evaporates. There are many women who are very humble and are not even aware of their own beauty. It just confounds me how catty and envious girls/women can be confronted with someone whom they perceive more beautiful than they. Even the most beautiful person becomes ugly when all that anger and hate comes out of either their mouths or body language. Classic beauties to me, are Elizabeth Taylor, Grace Kelly, Gina Lollobrigida and Ava Gardner. Then we have JLaw….a beauty… Read more »

My best friend is beautiful BUT when you talk to her she feels like she just crawled out of a sewer! You are so right, women can be too humble. I suppose flipping through a womens magazine is ONE good reason! IF you think you need to look like THAT you are in big trouble! I feel for the younger girls who dont know any better. Guys like flaws. Here is a secret ladies, we dont want a girl gift wrap out of a box! Some of the cutest girls are in the gym, at the park or just waking… Read more »

Yeah, so, you see what I mean, Timmmy. Some of us women do not see in the mirror what others see. Completely oblivious to our own sensuality, and beauty. Why? It is a natural phenomenon and not forced. No airs!!!!
Yet, sometimes good looks are a curse. And, it is assumed that beautiful women are imbeciles. People cannot see past the physical attributes.
Melody Thomas Scott, Cindy Crawford, Carrie Underwood, Tyra Banks, and Sharon Stone are all beauties with brains (to name a couple).
Later, my Timmmy.

Oh, Nanci! LOL. Actually, he’s the lucky one.
Seriously, though, Justin is not what one would call a classically handsome man. He has irregular features. But, that face exudes masculinity galore….so good to look at and soooo hot. And, that body? I am left speechless and breathless.

And yeah, Justin is super handsome with many good attributes!
I love his voice, too. Ahhh, just so much to enjoy…

Justin is so hot and now he is making me hot lol.I would like to see his show on NBC I saw the commercials for it the first time yesterday and it looks to be good.This guy makes me wish I could crawl into my computer screen and just give him a hug.Justin you are so handsome.Oh never mind the computer how about the tv ..and as I said before great actor.I actually had tears in my eyes when he saw his son.Love Justin so much.

Funny this article came out because I was watching Tuesdays episode where Adam and Chelsea were lying in bed in their secret hideaway and his chest was just popping with muscles! Its hard work! He deserves the attention!

I’m glad for Justin’s success. Frankly, before Adam, I was never aware of his exceptional talent. I didn’t like him much on REVENGE but, in all fairness, the part wasn’t that great. This is really a breakout role for him. I just hope we can keep him!