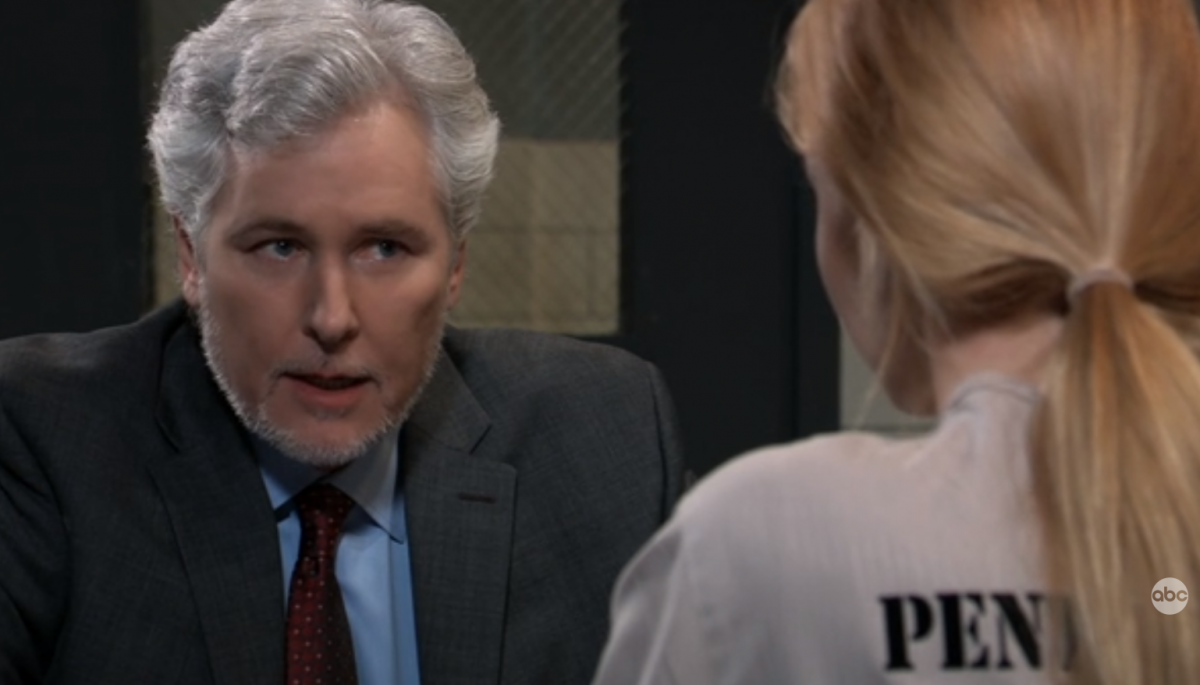 When we heard the one and only Michael E. Knight was coming to General Hospital, not only did we jump for joy, but we, like many others, were wondering just what kind of new character would “Martin Grey” be, especially with that first name nod of Knight’s time as the iconic Tad Martin on All My Children.

Viewers got a glimpse of Knight as lawyer Martin Grey on Monday’s episode of the ABC daytime drama series, when he first appears visiting his prospective new client in prison, none other than Nelle Benson (Chloe Lanier).

When Nelle meets Martin she informs him she needs him to help her get granted parole in her upcoming hearing.  He says he had not decided if he would take her case, especially when the two go over her list of crimes and how things look quite bleak for her.

WATCH: Nelle tries to convince a new lawyer to take her case and help get her out of Pentonville. @chloelanier #MichaelEKnight #GH pic.twitter.com/xZEseg1h1w

Nelle tells the attorney that she feels like she’s paid enough and she’s been a model prisoner. She lays it on a bit thick with how it makes her sick to think of the pain she has caused everyone.  Of course, Nelle swears she can make amends with everyone she has wronged,  but she has to get out of the slammer first to do it.

And  …what do you know? By the end of their conversation, Martin agrees to represent Nelle.  And … the day gets better for Nelle when she learns that Shiloh died, too!

So, do you think Martin is on the up and up?  Will he be some shady lawyer?  Will he eventually blackmail or scheme with Nelle? So many questions! But first, were you thrilled to see Knight on GH? Comment below.

This is going to be interesting to say the least. Looking forward to Chloe coming back full time.

I watched and couldn’t help noticing how powerful Michael and Chloe are opposite each other. I thought the scenes they did were great and looking forward to more. And especially watching how Michael is with other GH cast members. This may have been a great move for the show!!!

He had just a crazy look in his eyes and I loved his subtle expressions. Who knows what’s up his sleeve. I do hope he screws over Nelle and we get to see her go wild before she’s carted off again.

So glad to see him back on the soaps… just hope this is a strong role to keep him !!! I adore Michael as Tad and I miss AMC..

Chloe Lanier and Michael E. Knight together! Great casting. Looking forward to all of the fun.

Yes, i am so happy that michael e knight is on gh ! I miss him so much and even tho he did not come back as tad at lest he is still a Martin

knight new character was reeking in creepy vibe, yikes, it will be interesting to see what he will do, I bet he’ll end up being Franco/drew new lawyer.

welcome back Michael!! loved u as tad on AMC!!