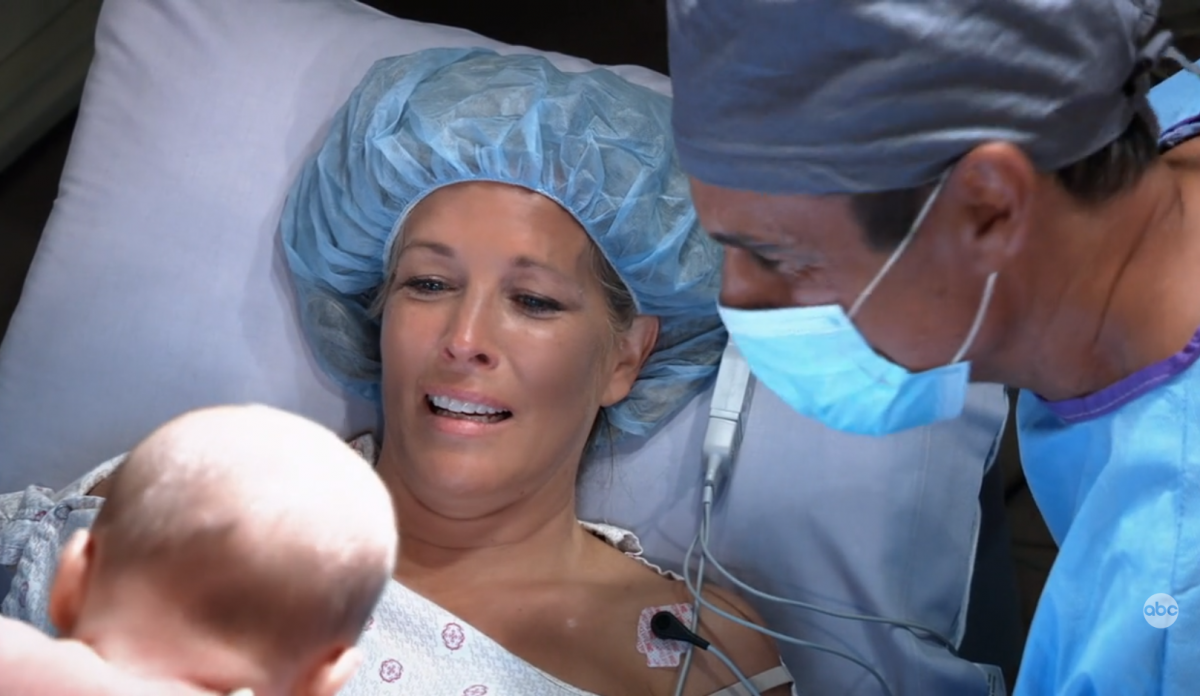 Monday’s General Hospital brought with it a touching reveal, as the ABC daytime drama series honored the late Donna Messina who was an integral part of the GH family from 1983-2018 until her death.  Messina was the beloved make-up artist behind the scenes, who every actor came to know and love.

In story, Carly (Laura Wright) undergoes her c-section with Sonny (Maurice Benard) by her side to bring her new little bundle of joy into the world.  The baby is delivered and it’s a Corinthos baby girl!

Next, the doctors have to perform surgery on her due to the baby’s condition of spina bifada.  Before she is taken away, Sonny and Carly reveal her name is “Donna”.  While “Donna” is in surgery, and Carly is resting, Michael (Chad Duell), Joss (Eden McCoy) and Kristina (Lexi Ainsworth) come to see her along with Sonny.  It is there that Sonny and Carly inform the kids that they have a baby sister … and she is named “Donna’.

That set the stage for a heart-tugging monologue by Maurice Benard, who explains that the baby was named after Donna Messina from the old neighborhood – an homage to the real Donna and her qualities – and also Benard’s treasured friendship with her.

Sonny says of Donna: “She was kind and loyal and she knew how to keep a secret – you could talk to her about anything and your problems, who you love, your fears.  She would just listen, and she wouldn’t judge and she wouldn’t tell a soul.  She was tough as nails and she had no patience for fools.  And if you were annoying, she would get in your face.  She hated bullies, no matter young or old, it didn’t matter. And she was fearless, but most of all she was kind, loyal, and generous.  One of the greatest things about her was that she could always make you smile, no matter how you’re feeling. That was just the way she was.”

Messina lost her battle to cancer in December of 2018.

So, what did you think about how GH wrote in to the story their love for Donna?  Share your thoughts via the comment section below.

I thank that is wonderful and is a beautiful thing to do for there friend It shows how much they cared for her.

What a nice tribute to Donna! She will
Never be forgotten by the GH cast.

Donna. Thats cool, they went traditional instead of soapy!

I love the tribute to donna.

I think that Donna was a very lucky lady, when alive to have the love, respect and admiration of all these people and how appreciative they were of what she gave them to honor her in this way. I was so sure they would name the baby Morgan, boy or girl.

The actors weren’t all that in the birthing scenes, but the writing and delivery from MB about Donna was a real unique and touching tribute to this lady.

Totally loved that ! The way it was portrayed made me think “Donna” must be a real person, so thanks to MFTV for the explanation. Well done, GH.

Such a beautiful tribute! Well done!

They didn’t need another child this is bogus!!!

Technically, this is their only child. Morgan is dead, and Michael is not theirs. He is hers and AJ’s. Sonny kidnapped Michael and illegally adopted him. That does not make him Michael’s father…it makes him his abductor. Can soap writers REALLY not think of any other storylines for women besides pregnancies?? DAYS takes the cake right now, with Kristen being pregnant! Kristen is old enough to be EJ’s mother…EJ is 40 ish, which puts Kristen at close to 60. Those must be some fertility drugs Rolf has!!

Sonny can never have enough offspring…..or, at least, that seems to be the prevailing opinion of GH showrunners! Personally, I would like to see him close up shop on his seemingly endless capacity for reproduction and retire to “gramps status!” Time for the “next generation” to take over….

I guess you are right

Sonny’s prodigious propensity for procreation is a bit of a running theme amongst certain aghast posters here at this website, Sharon. And I’m one of those who pleads guilty….Lol.

what a way to pay tribute to such an amazing woman!!!

Like others I feel naming the baby Donna was a nice lasting tribute to their friend and colleague. Except for one thing. Every time anyone says Donna, it can sound like the beginning of Dawn Of Day…not a memory I want to remember. Darn!