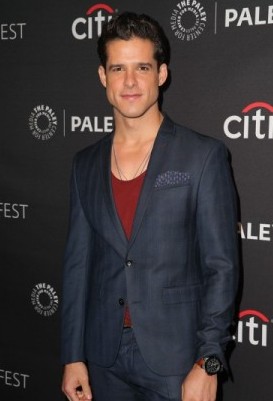 One of the most highly-anticipated new shows on the fall line-up is NBC‘s Law & Order True Crime: The Menendez Murders.

The eight-episode season tells the brothers side of the story and the dramatization of the trial of Lyle and Erik who were convicted in 1996 for the murder of their parents, Jose and Kitty Menendez. The boys, who were defended by then attorney Leslie Abramson, were sentenced to life in prison without the possibility of parole in 1996.

While Lyle and Erik committed the crime, they were both the victims of sexual abuse at the hands of their parents, which is detailed in this harrowing and powerful series. The point of contention of the real-life story back in the 90’s was were the boys telling the truth about their abuse, or not. As Dick Wolf, the executive producer of the series said during the Paley Center for Media Panel spotlighting the show, “It’s not the ‘who’, at the end of the eight hours, you’re going to really understand the ‘why.’”

On-Air On-Soaps caught up on the red carpet with former Y&R star, Miles Gaston Villanueva (Ex-Luca Santori) who plays Lyle Menendez on the upcoming drama series, as well as his on-screen younger brother, Gus Halper, who plays Erik Menendez at the Paley Center for Media Fall Preview of the series last week.  Here’s what they shared of their experience thus far (as they are currently taping the last few episodes of the season), and their thoughts on inhabiting the lives of these troubled young men, and what they believe to be the truth of what happened behind close doors in the Menendez family.

MILES: Honestly, if I could do this role again in maybe 5 or 10 years, maybe I could do it more justice, but it’s one of the hardest and most difficult tasks to capture and to try to put yourself in their shoes. I know personally, Gus brought me back to a place of authenticity and a darkness, and a really scary truth, that is maybe something that I can’t really fathom, or are to afraid to get into.  This show has been the most challenging thing we both have done. 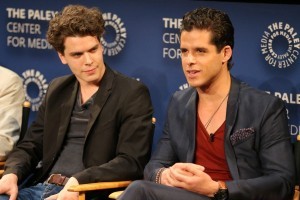 GUS:  Far and away, this is the most challenging thing I have done. I feel very confident in what I believe is the truth of what happened.

MILES:  Yes, undeniably and daily.  We have a whole crew of people, and a whole group of people who believe it too, and if they are not saying it or spouting it out, they know the story we are telling.  We are bonding with our family members in the show, and in the production. We are all really grateful to be able to give a voice to not only the Menendez brothers, but other people who have suffered abuse whether it be sexual, emotional, or psychological.

GUS:  There are certain days (during the shooting process) where you get something important, and you’re doing well, and those days make it all worth it.

MILES: I know I have to do turn to Gus and he gives me a reality check with this story.  In the audition process, I got to read with Gus.  I was really fortunate to have read with him, and I know he was a huge reason why I booked this part, because our bond was pretty immediate and deep.

Later inside the panel, when asked if Miles would want to ever meet the man he is portraying, Lyle Menendez, he answered: “That’s a hard question.  I’m just wondering if they (the brothers) wonder how each other is doing.  They have not seen each other in over 2o-some-odd years.  We found out they play chess through the mail.  I have brothers in real life, and Gus is like a brother, and so the idea that while yes, they committed this crime and that was wrong, to not being able to see your brother for decades is just wild to me.  To ask another human being: ‘How are you doing now?’ ‘How is life now?’ It would be insightful, and at the same time really heartbreaking.”‘

So, will you be watching the series? Think you know all the details of the Menendez Murders? Think again! This show promises to rip the lid off the story, and it should be must-see TV. Comment below!

I do want to catch this show. Don’t know if it will be as highly rated as a couple of other installments in the Law and order franchise but i do think it will be good for me.

Initially, I wasn’t interested, having “lived” through all the coverage when it happened. But the more I read about it, the more interested I am. It’s on my schedule for the new season & I will definitely be watching.

Love “Law and Order SVU” and “Criminal Intent” (reruns)…..so much so that I can watch and rewatch reruns over and over.
I will try to watch, albeit I have an antipathy for Villanuema. Not a fan……We shall see, James .

Was the abuse ever really proven?

So he wants to give a voice to killers. Okay. I wont’ be watching.

No, the abuse is still in question. And their actions following the murders didn’t help their claims of abuse.

Consider the source! We have had six thousand movies made of thes killers enough already!

Does anyone agree that there is a bigger problem going on here, especially when you take a look at the fall TV schedule? They’re rehashing EVERYTHING, good or bad, interesting or (usually) not. Scott Peterson specials, live interviews with that creepy Son of Sam, endless noise about O.J. or that poor Jon-Benet Ramsey. Isn’t there anything else they can come up with? Inane reality shows about people I hope I never meet or live next to; Navy Seals; conspiracy-driven maze-plots with no redeeming characters; ever more grisly crime dramas that exploit violence toward women under the guise of realism? And… Read more »

They can’t seem to come up with new ideas. I read “Miami Vice” will be redone. Why? The original was good, the 2.0 version probably won’t be.

Soaphound…oh, I agree. To me, NOTHING out there on the TV HORIZON is looking new or fresh. Beyond sad.

Totally agree with your comment Soaphound. I recently found a fun time out from all of the rehashed crap on tv, as well as the daily negative news. It’s reruns of “Murder She Wrote.” Each one is a new adventure in who will be guest stars per episode which include many from our favorite soaps…like John McCook, Eric Braeden, Genie Francis, Judith Chapman, and “Yes” even Constance Towers/Helena. Today it was George Clooney. Probably not for su, though.

Hmmmm, got you–I see what you mean.