On Thursday night’s Nashville midseason premiere: heartache, heartbreak, and heart damage were the order of the day.  Through the hour episode, the Nashville men took front and center stage through their emotional songs and their dramatic turns. 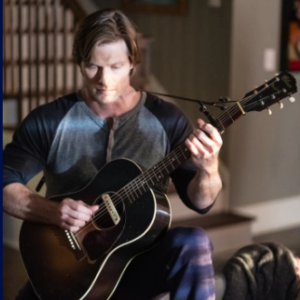 We pick up right after Will (Chris Carmack) is rushed to the hospital after collapsing during The Chew performance in New York.  Gunnar (Sam Palladio) and Alannah (Rainee Blake) learn from the doctor that their friend and bandmate is suffering from none other than a heart infection. The physician says, “Are any of you aware that he was using needles, injecting steroids?” Avery (Jonathan Jackson), and Alannah are stunned while Gunnar reveals that he knew about Will injecting himself once.  When Avery and Gunnar go visit Will in his hospital room, Gunnar is mad because he thinks it is “stupid” that Will did this to himself.

Will, as usual, sloughs it off and apologizes. But things don’t look good for Will. The doctor tells the country star to take it easy, and that he might need surgery, because there is something going on in his mitral valve in his heart. Will receives bad news; that he can’t play concerts or perform anytime soon.

When the news spreads through Nashville that Will has survived this heart scare, none other than Zach (Cameron Scoggins), Will’s ex, surprises him when Will is at home resting.  Zach gets a clue that Will’s steroid use may have something to do with the good-looking trainer, Mark, who he flaunted in front of his face when the two of them broke up.  As the two of them kind of flirt with each other, Zach mentions that Mark and him broke up, leaving a possible window of hope that Zach and Will might get back together again.

Scarlett (Clare Bowen), who sees that Will is feeling sorry for himself, gives him a notebook and a pen and tells him to try to write a song about his feelings, even though Will protests that he is a showman, not a songwriter. But of course, in true Nashville fashion, Will comes up with an emotional song by the end of the episode, sung and played to perfection by Carmack. 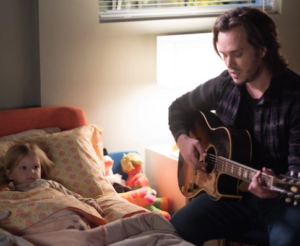 As for Avery, is there anything cuter than Avery with his young daughter Cadence, while MIA mother Juliette (Hayden Panetierre) has once again put him in a position where he’s raising this child all by himself?  Meanwhile Alannah, who has slept with Gunnar, is very attracted to Avery.

One night, after it appears that she hit the sack with Gunnar, she goes over to Avery’s to hang out for some drinking … dancing … and talking.  It is apparent that Avery enjoys her company, and she is clearly into him. Nothing happens between them.  They both fall asleep separately in the living room, and the next morning Avery thanks her for her support.

However, a tabloid photo surfaces on Gunnar’s phone that says there’s a woman sneaking out of Avery’s house. When he sees that it is none other than Alannah, Gunnar is livid! He heads over to a rehearsal begging for a fight. They don’t have a fight, but instead, Gunnar gets hit in the nose by the band member’s guitar. The way it looks to us, maybe, just maybe, Gunnar and Will, who have been good friends, even though Gunnar hasn’t slept with a guy that maybe, just maybe, they could end up together?  After all, Gunnar and Will did kiss that one time.  Is this just wishful thinking, or could Nashville go down this road before its series finale?

As for Deacon Claybourne (Charles Esten), who has been the epicenter of the show, since Connie Britton has departed, he has gotten himself caught in the middle and involved with Jessie (Kaitlin Doubleday) and her ex, Brad (Jeff Nordling). Brad is suing Jessie for full custody of their son. Deacon’s past of alcohol abuse and and fights don’t look good for them, and it’s tearing this possible new love affair apart.  Later, Jessie and Deacon profess they don’t want to lose each other. 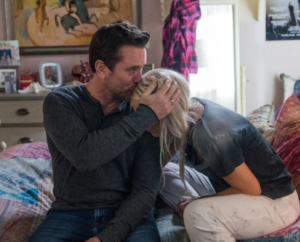 However, the most poignant moment of the show happened when Maddie (Lennon Stella), who knocked back some booze during Jonah’s birthday week, showed up back at Deacon and Rayna’s home.  She’s defiant, and she wants to move out.  Deacon notices that she’s drinking water, looking dehydrated like she’s hungover from alcohol.

He confronts her and says, “What the heck were you thinking?” She screams that she’s an adult, and she’s 18.  He says, “Not in this house you’re not!” She fires back, “Maybe I should move out!” As they’re both crying, and they begin to calm down. Deacon is fearful that he could pass the addiction gene of alcohol onto his daughter.  He reflects on how he lost so many years with Rayna, and so many years with his daughter, and that he doesn’t want Maddie to make the same mistakes as he did.

At the end of the episode, seeing how her sister, Daphne (Maisy Stella) is broken up over the fact that she doesn’t want Maddie to move out, she ends up in bed hanging out with her dad and her sister, and they hug it out now she’s going to stay, and not leave the nest.

So, what did you think about midseason premiere of Nashville?  Did it have a lot of heart? Share your thoughts in the comment section below.

THE BACHELORETTE: A Tale Of Two Ambulances, Awkward Spa Date & Songwriting Your Feelings

GENERAL HOSPITAL: What Did You Think Of Robin’s Reaction To Finding Out Anna Had A Secret Son?

Will can do so much better than sociopathic Zach. But they’ve never given him much of a love life. I like Jessie with Deacon, but hate Brad (Jeffrey Nordling, like Rob Lowe, keeps showing up in and ruining so many shows I like) and want him GONE. Gunnar’s jealousy is childish and boring…is this the best story they can find for this talented guy? Scarlett’s latest adopted puppy routine is also wearing thin. Overall, we need a massive blood transfusion into the show. Hate to see it go out with a whimper, like LOST.