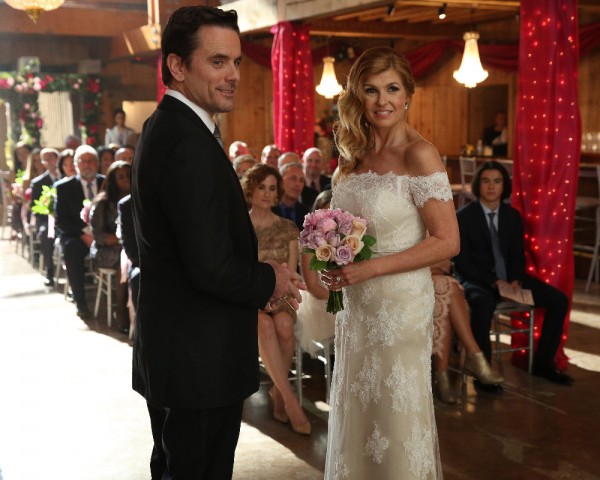 Wednesday night, March 16th marks the return of ABC’s Nashville after it’s long midseason break. We ledt off with Deacon (Charles Esten) proposing to Rayna (Connie Britton) which she accepted, and the nuptials being set.

But tonight, beginning at 10PMET/9PMCT, it’s the wedding viewers have longed for between the duo.  Deacon and Rayna officially tie the knot, complete with captivating music performances by series regulars: Charles Esten, Clare Bowen, Sam Palladio, Lennon Stella and Maisy Stella as well as cameos by Jay DeMarcus of Rascal Flatts and singer/songwriter Jim Lauderdale portraying themselves.

According to ABC, also look for in the episode entitled: Forever, and for Always: “When the loving couple are ambushed by paparazzi after their intimate rehearsal dinner, Deacon’s hot-headed reaction casts a pall on the plans and forces a change of venue. Meanwhile, wedding guest Avery (Jonathan Jackson) is struggling to keep up with the lies Juliette (Hayden Panettiere) is forcing him to message to press in her absence.”

As to her thoughts on the “I do’s”,  series star and executive producer, Connie Britton told TV Line: “There were definitely moments that we (Charles and Connie) wanted to try to capture. To both of us, I know, it was really important to capture the idea that this was a long time coming and both characters had really worked through a lot to get to this place. There was something very special about that.”

But Britton also felt there should have perhaps been more time, between the proposal and the actual wedding: “I mean, in my opinion, I think we could have actually drawn it out longer and made even more of a build-up to the wedding … but I thought it was great that they finally did it!”

So, will you be watching tonight’s wedding between Deacon and Rayna? Do you think the walk down the aisle is too fast, or was well worth the wait, and now you are glad the star-crossed duo are getting hitched?  Are you concerned that the Music City drama is still sitting on the bubble for being renewed for another season? Share your thoughts in the comment section below!

GH's Elizabeth Going On Brief Hiatus After Herbst Contract Talks: ABC's Nathan Varni Says: "I Am Truly Excited About What Jean & Shelly Have Planned For Liz In The Months Ahead."

Absolutely I will be warching tonight. It feels like forever since its been on. I love that Rayna and Deacon are finally getting married. Is it too soon.? Should there be more time watching them grow and build? Either way we know this marriage is going to rock all marriages but there will be huge fights, breakups, make ups and long stretches of just plain lovin. Cheers to Rayna and Deacon

I love this show but fear, with the corporate changes at ABC, this is the beginning of the end.

Definately watching. Word is since they get revenue from downloaded songs it’s still profitable for the network. Hope so. Great show!

I was excited about Nashville finally coming back after a way too long mid season recess but was incredibly disappointed with this episode. The problem with Nashville is that it seems predicated upon its weakest link–Rayna and her family. Rayna is boring and so is her family. Deacon is at his most interesting when away from Rayna but when he is with her, these two go into repeat cycle. The most interesting characters are the ones who are backburned. The only way Nashville can save itself is to steer away from Rayna and her boring family and focus on the… Read more »

My wife and I love “Nashville”. I wish there were a couple more primetime soaps like it. In fact, I would love to see a half hour soap ABC soap spin off. They could easily spin off the characters that Michael Lowry and Scott Reeves play on the show. These actors have daytime experience and a good fan following. I know- keep dreaming 🙂