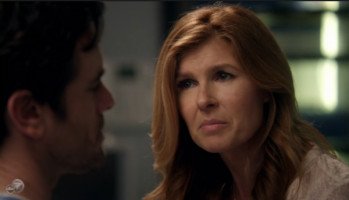 Wednesday night on the season three finale of Nashville, as the series had done in the past, they have left its viewers with an intense final minutes to leave us wanting more until the show returns for its just announced fourth season this fall!

Let’s break this down:  In the ultimate cliffhanger as Rayna (Connie Britton) and her children wait for news on Deacon’s (Charles Esten) life-saving liver transplant surgery,  Caleb (Nick Jandl)comes into the waiting room at the hospital and asks if he can have a moment with Rayna. Viewers just saw a harrowing few moments when someone flatlined in surgery, but we don’t know if it’s Deacon or his sister Beverly (Dana Wheeler-Nicholson) who is the donor to save his life! As Rayna gets up to listen to what Doc Caleb has to say, in the background on the TV monitor, Rayna’s former husband Teddy (Eric Close) has just been arrested and is being taken into custody via a breaking news report that she nor their daughters notices is happening!   Caleb then lowers the boom and says to Rayna, “I have some bad news”, and we fade to black!   Did Deacon die on the table?  Did Beverly?  Is the surgery a complete bust?

Then, as Juliette (Hayden Panetierre) went ahead and re-launched her recording and concert career, she continues with her postpartum depression disconnected from her husband Avery(Jonathan Jackson) and their newborn child Cadence. She even has a massive temper tantrum and all most hits her hubby and their baby when she grabs something off the bookshelves and aims it squarely at them!  Enough was enough for Avery when he learned she went to the man that Avery despises the most in the world, Jeff Fordham (Oliver Hudson).   The record executive along with Luke Wheeler (Will Chase) agreed to get behind Juliette’s career and resurrect it.   Avery is devastated that she is so out of control and put everything ahead of her new baby and him.  So, Avery decides to leave Juliette and takes their baby with him, but where is he driving to?  Can we just say no one cries and makes us feel his inner pain like Jonathan Jackson!

And there was the heartbreaking story of Will Lexington (Chris Carmack).  After a tabloid report with photos of him and his beau Kevin (Kyle Dean Massey)became public, Will needs this report that he is gay to go away and so he asks his boyfriend Kevin to lie for him in a press conference.  But in doing so, it’s clearly curtains for the duo.  Kevin does what he asks, then leaves.  When it’s his turn to address the press Will begins to confirm what Kevin said was true, and then he has a moment of truth.  He cannot lie anymore, and his father is even in the crowd.  Will admits he is gay.  Later, in one of the most touching scenes of the season finale, Will tells Kevin he loves him.  It was beautifully played by the talented Chris Carmack!

Elsewhere, Gunnar (Sam Palladio) and Scarlett (Claire Bowen) almost kissed after singing their new emotional tune together, and Layla (Aubrey Peeples) found out all about Jeff’s machinations of her and goes to demolish his car! But in the end it looks like these two destructive people just can’t get enough of each other!

Watch the final moments of the season finale below!  Then let us know,  what was your favorite moment in the season finale of Nashville?   Did Beverly or Deacon flatline?  What do you hope happens when the series returns next fall?   What did you think about the performances of Charles Esten, Jonathan Jackson and Chris Carmack, who all had heavy emotional scenes in the finale?  Comment below!

A Martinez Joins The Cast of Days of our Lives!

I hope it’s Beverly and not Deacon. It was a very good season finale.

Good show. I enjoyed it. Avery has his baby, deacon can’t die. Beverly needs to go. Taking money for saving her brother ?”Do something with Scarlett’s hair PLEASE. She is a pretty girl but that hair is a disaster. Will should have come out. He looked like he wanted to jump off a bridge. Jeff needs to be shoved off one. Layla needs someone to tell her, wake up Jeff is scum.! Hopefully Juliette’s signing will be null and void because she is mental. Can’t sign anything when you are not sane. Happy it was renewed, I like the show.… Read more »