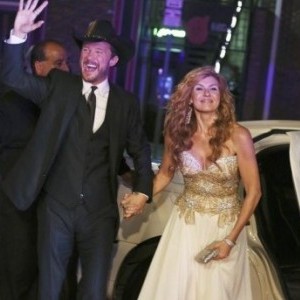 Last night’s episode of ABC’s Nashville was one of our favorites of the season thus far.  The episode entitled “You’re Lookin’ At Country” was set against the backdrop of  country music’s biggest night of the year, the 48th Annual CMA Awards!

Supercouple Ruke was up for 11 awards between them, but you just knew that Luke (Will Chase) was not going to be a happy camper with Rayna (Connie Britton) getting award after award, especially when they were going head to head!  The night started off poorly and went down the toilet!  First, Rayna stumbles upon the pre-nuptial agreement that Luke wants her sign prior to the ceremony.  Then at the CMA’s, Rayna is winning award after award and thanks her songwriting partner (and former lover, and the man we all know she truly loves) Deacon Claybourne (Charles Esten), which sets Luke off.   He later goes on a drinking binge and bumps into none other than Sadie Stone (Laura Benanti), who is crying over an ex!  You can tell that Luke and Sadie are bound to screw around on Rayna anytime now!  After all, it’s her artist and her fiancée’!  Later, when “Ball and Chain” wins a CMA, and Luke and Rayna take to the podium to accept, Luke doesn’t let Rayna get a word in edgewise! Back at home, after admitting he was a pompous jealous jackass to Rayna, she tells him he is stinking drunk and to go take a shower before coming to bed. Cue the text message! Deacon texts Rayna to congratulate her!  Rayna looks conflicted!  This was one of our favorite performances throughout by series star, Connie Britton.

Avery’s (Jonathan Jackson) parents are in town for the CMA’ s and he brings them to the ceremony, since he is a nominee and he introduces them to preggars Juliette (Hayden Panettiere! Avery’s dad makes the singer/songwriter feel less than about his life, his career, and the gal pregnant with his child.  Meanwhile, Juliette is having flashbacks of her mother’s terrible upbringing of her as a young child.  Avery later holds Juliette’s hand in the most touching moment of the night, when Juliette admits they are having a baby girl.  He then assures Juliette that even though their parents are messed-up, it won’t happen to their child, “We got this,” Avery promises her.  Jonathan Jackson was fantastic in these scenes.   At the end of the episode it almost looks like the two are finally going to kiss, when Juliette needs help unzipping her dress, but alas, Avery leaves.

As for Will (Chris Carmack) and Layla (Aubrey Peeples) – the reality series is destroying Layla bit by bit – as in the closet Will is becoming a bigger sex symbol right in front of a nationwide TV audience!  She even makes a point on the teleprompter of not reading their lines when they are presenting in an award because it makes her look like an idiot, so she instead ad-libs, ‘I deferred Harvard!”  In a tender scene, after the CMA’s are all said and done, Layla asks Will to hold her which he does.  How much longer will it be before Will’s cover is blown? Will Layla finally be the one to let every one know?  Kudos to both Chris Carmack and Aubrey Peeples for these scenes, and we loved their musical performance, too!

Gunnar (Sam Palladio) goes nuts when his newly found son Micah goes missing after Zoe (Chaley Rose) gets a visit while in the auditorium from Jeff Fordham (Oliver Hudson). The record exec says he is interested in hearing her demos and to set up an appointment with him.  Zoe took her eyes off of Micah for a millisecond, and he is gone.  Later, while searching for Micah, Gunnar wins a CMA. Micah is found, and father and son have a big bonding moment that does not go unnoticed by Zoe! Afterwards, Zoe leaves Gunnar to pursue her dreams and shows up on Scarlett’s (Claire Bowen) doorstep!

So, did you enjoy last night’s Nashville? Whose performance knocked you out the most? What do you think will happen next to all our favorite singer and songwriters on the Music City drama? Comment below!

Too much singing.. I FF through most the songs/ not good..
and- I think we all know Rayna and Deacon are end game; more than obvious..

Once again surprised this show doesn’t get any responses…though I think a number of soapers watch it! Sorry, Michael Fairman, LOL, if I’m your only comment here…so sad. 😉 Alak and alas…let’s get to it! Hahahha…I LOVED the episode…but then again I love the show! You covered all the highlights and each one…story and actors was great! I liked seeing a glimpse into Avery’s life. It was a pivotal point when he realized he WAS behaving just like his dad by holdig Juliette at bay. When he realized he too couldn’t get past his anger or his judgement, he/they turned… Read more »

I love this show!!! Did I miss the episode where everybody finds out that Gunner has a son? Including his girlfriend and the son.

Gunnar’s baby mama is the girl from the Spy Kids movies. In SK she was billed as Alexa VEGA and has now gone back to her actual name of Alexa PENAVEGA. She was in a few episodes and split, conveniently leaving the kid. As for Zoey, she’s gotten too annoyed too quickly IMO. She’s acting like the mom’s habit of dropping the son off early and picking up late has been going on for months or years instead of weeks. I thought Zoey was level headed but in recent weeks she’s been acting like a petulant teenager. which I think… Read more »

I love love love this show, and why would someone that watches FF through the songs?? That give the show life, after all it is about Country Music.

Yes that scene with Juliette and Avery was so sweet, also enjoyed Deacon and Scarlett watching the CMA’s together. Not sure what to think about Luke but year expected him to do something with Sadie, not Teddy and the escort!