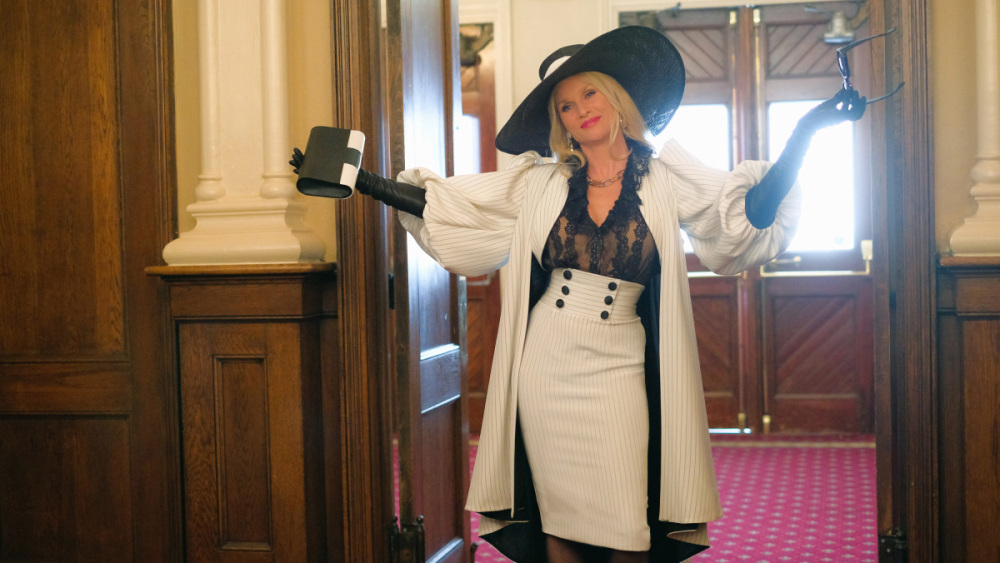 Over the last 16 hours news that former Knots Landing favorite, Nicollette Sheridan is departing her role of Alexis Carrington on CW’s Dynasty has sent some shockwaves through the series and its fans.  Sheridan took on the iconic role, originally played by Joan Collins in the original ABC sudsy version, less than a year ago, when the character came back on to the canvas towards the second half of the first season

In the first statement from the CW on her decision to exit, it read: “Nicollette Sheridan will be leaving Dynasty in order to focus on some personal family responsibilities.  She was a valuable asset to the show and we wish her continued success in the future.”

According to TV Line who broke the news; Sheridan will make her final appearance as Alexis in March.  Sources are reporting that the role may be recast.

In addition, Sheridan then released her own statement to clarify why she is exiting the pivotal role at this time stating: “Working on the Dynasty reboot and reprising the iconic role of Alexis has been thoroughly enjoyable, but the chance to spend precious time with my terminally ill mother is more important to me right now. I am profoundly grateful to Mark Pedowitz (The CW) and David Stapf (CBS) for graciously allowing me to return to Los Angeles to be with her, and I wish them and everyone associated with the show nothing but continued success. I am hopeful that my fans will embrace my successor with as much passion as they embraced me.”

With Sheridan’s exit that makes the series third major casting loss with Nathalie Kelly (the original Cristal) and James Macay (Steven) also gone from the series.

Meanwhile, this season of Dynasty marches on Friday’s at 8/7 on the CW.  The series has been renewed for a third season.

So, sad to hear Nicollette is stepping away from Dynasty? If the show were to recast, who now could fill the shoes of Alexis Carrington? Share your thoughts via the comment section below.

i was going to say the same..family is the most important and should always come first

Ms. Sheridan returneth high yield : atop her reign. DONE I have loved this woman’ class… the way she carries … Sexy Plus her last marriage finalized August, 2018. perhaps it’s now time to nest she certainly never had it , it seems, when it comes to commitment (s) knot’s Landing: I cheered her on.. when she interloped vexed and channeled her own energies onto that cul de sac, no? that ready made “familial” of karen, Val, even Donna, Plus Laura. oh god it was made even more savory w: Nicolette Sheriden : Paige Lisa Hartman : Cathy Michelle Phillips… Read more »

Ava from GH bye bye. you would make a great Alexis Carrington

Family definitely comes first; I wasn’t sold on her casting and, while she’s done fine, I didn’t really connect to her as Alexis. Ultimately, in recasting, I’d love to see someone from daytime take ahold of the role. I’d love to see Eileen Davidson take creative control of the role as an actress. She’d be delicious as Alexis.

I wish her and her mother well.

Heather is dealing with a lot of issues. She needs to get healthy.

Yes, Momo, I read about her problems; I am praying that she is on the road to recovery.

Well of course Heather Locklear would be perfect!,,,,,

How this show survives while the much superior Dallas reboot was cancelled baffles me. This show is a cartoon

Clearly an admirable, noble track for Ms. Sheridan. I have written enthusiastic, supportive things on these pages about the Dynasty reboot. But I stopped watching at the end of last season. To me, the heart and soul of this incarnation of Dynasty, as in the original, were the characters of Cristal (Krystle) and Steven. When I learned that Nathalie Kelly would not return this season, I gave up on the show. Now reading that James Macay is also gone solidifies my decision. I will say that I did enjoy the the actors playing Fallon and Sammy Joe (in the reboot),… Read more »

Have a good one, Brother.

As much as I enjoy Miss Sheridan, I find THE CW’s DYNASTY is unwatchable. Seems almost too campy and silly. Even heightened melodrama must be played as truth. I do not feel it here. It is difficult to root for anyone or care plot to plot.

While I never really saw Nicollette as Alexis, she has grown on me in the role. My initial thoughts for the role ran more toward Grant Show’s old cast mates from Melrose Place: Marcia Cross or Josie Bissett.

They should hire Yasmine Bleeth. What a trip that would be for Ryan’s Hope viewers circa 1984! Lol. When Grant Show and her played young lovers.

Teri Hatcher is within the age group and can play bitchy

I don’t have an opinion on the re-cast for Alexis (but, frankly, questioned whether Sheridan was the best choice for the part). However, on a somewhat related point…… After Michelle Stafford left Y&R, I’ve always thought Sheridan would fantastic as a recast for Phyllis Summers on Y&R. Gina Tognoni has never struck me as “right” for Phyllis, largely because I think she is too young for the role. It is hard to reconcile Tognoni’s Phyllis being the mother of late 30s/early 40’s Daniel Romalotti. Stafford will always be the “real” Phyllis to me. However, if she isn’t available, Sheridan (with… Read more »

I couldn’t agree more Alan. Eileen would make a great Alexis. Imagine how great scenes between her and Liz Gillies (Fallon) would be.

I wish her well and best wishes to her during this trying time. She can always do another show. She’ll never get time with her mother again.

Zoe Lucker should be the new Alexis! She killed it on Footballer’s Wives!