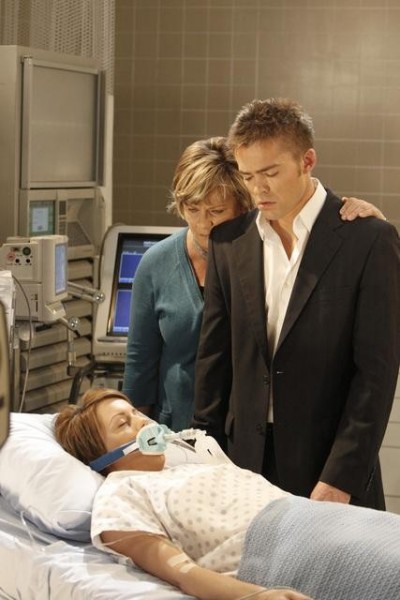 Over the past few weeks, One Life to Live fans have been watching the story unfold and masterfully written as Rex Balsom is faced with a horrific decision.. to give his father, Clint Buchanan, the man he hates the most in this world, the heart of his beloved Gigi Morasco, who lies brain-dead in the hospital, thanks to the skullduggery of Jack Manning.  As Rex struggled with the decision and yet was defiant at the same time that he would not allow Clint to have his much-needed heart transplant, he came to realize that he had no money and no power to fight the Mannings, once Todd got Jack off the hook for Gigi’s death.  So he had to come up with a plan.

Fans have watched as John-Paul Lavoisier gave great performance after great performance, and truly the finest moments of his soap opera acting career.  He made all of us at home, just want to reach out to Rex and give him a hug! JP’s Rex valiantly tries to hold it together for his son, Shane, while at the time crumbling with the unfathomable loss of the woman he was about to marry.

But it was on yesterday’s episode that he made us all grab for the hankies as we witnessed the sad ending of the long-storied romance of Rex and Gigi.  JP Lavoisier was magnificent as he had to say goodbye to the woman he loves as it was time for her to be taken into surgery to remove her heart and give it to Clint.  For this, On-Air On-Soaps has named John-Paul Lavoisier this week’s Power Performance of the Week. And we also applaud everyone else in this storyline – namely, Austin Williams as Shane for his heartbreaking final scenes with his mother, and Farah Fath as Gigi for the beautiful moments where she dances with Rex as closure for the duo.  And we would be remiss without mentioning the fantastic Jerry verDorn, who has made Clint through all of his heinous acts someone we don’t want to see kick the bucket, either!

Kudos to OLTL for soap opera at its best,  and to you,  Mr. Lavoisier!  Watch the heart-tugging moments and this week’s Power Performance here!

John-Paul, Austin, and Farah were perfection in yesterday’s episode. The acting from all three was so subtle, yet so powerful. I have loved John-Paul’s performances ever since I started watching OLTL. But his performance the day before with Jerry ver Dorn and then again yesterday with Austin, Farah, and Robert S. Woods showed everyone what he is capable of as an actor.

I havent been a viewer for all that long, but after yesterdays show it blows my mind why this soap is getting the axe. Soap opera at its finest with an emmy worthy performance from JP!!

I have always been a John Paul Lavoisier fan. I enjoy his quirkiness and comedic timing. He has a similar acting style to Scott Clifton. OLTL should have made them brothers….it would have made perfect sense. Anyway, JPL completely impressed me during this entire bullying arc. He has turned into the sole sympathetic hero of the show. I was in tears and felt Rex’s pain. JPL deserves some credit for these poerful performances. He should have a great reel for next years Emmys….if there is such a thing.

I cried watching those scenes. Everyone involved did a spectacular job. I am still so torn that Gigi and Rex never got to tie the knot, after watching them for all these years and rooting for them through all their ups and downs… Nevertheless, Austin, Farah & JPL all gave us Daytime Perfection!! Think I’m gonna go cry some more….

I also watched that peformance by JP, and I will tell you those scenes by GIGI’s bedside were so touching and he did a great sensitive round of acting. This was JP growing as an actor unlike anything he has done. For sure, I was choked up. Also with the backstory scenes with GiGI and the ring and especially,when they did the wedding vows. The writing of that episode was masterful. Bravo to one an all and JP and Farah and Austin. I can’t wait to see the Mannings get theirs.Go for it, Rex…..

It breaks my heart that Gigi was killed off. I love OLTL but they are breaking my heart severely. It seems that the bad guys are getting so much more mileage and that sucks. Jack needs to be run over by hit and run driver starring ME as the guest driver. I’d volunteer to perform the act for free. Ar first I was upset when “Original” Todd was returning because I really loved Todd 2. Now since he is 1000% in support of Jack, I don’t care if he turns out to be a fake or not. I MISS GIGI!

Great performances by all. So sad and heartbreaking to see Gigi go.