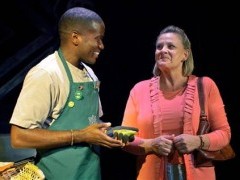 Four-time Daytime Emmy winner, Kim Zimmer, who is headed back to soapland in October when she reprises her role of Echo DiSavoy on One Life to Live, is currently starring in a theatrical production of a new play titled, Lost Boy Found at Whole Foods.

Zimmer plays Christine, a woman whose life is changed when she goes on a shopping trip to Whole Foods and encounters a young man cutting papayas.  She discovers that he’s one of the thousands of “lost boys” who were orphaned during the Second Sudanese Civil War.

In a new interview with MSNBC.news, Zimmer speaks about her work to awaken public consciousness to the atrocities in Darfur, and raising funds for the Darfur Rehabilitation Project, which is dedicated to raising international attention to the conflict in the troubled region in western Sudan, and fostering reconciliation across ethnic lines.

Zimmer said,  “I’m sure the audience will be moved in the same way I was, in that I was aware of what was going on in Darfur, but I knew nothing about the lost boys of Sudan. So I knew of the genocide, and of the horrible injustices of humanity that were going on in that country, but I didn’t know the specifics that the play introduces. I think they’ll be moved. One can only hope that when they participate in a piece of theater like this, that someone will come away from it with a new education. Perhaps, you never know, someone may decide to volunteer services to a refugee organization, or donate money to different organizations. That’s all you can really hope for, along with just raised awareness of anything that could arise in the future as far as these injustices against humanity.”

Devastating episodes of ATWT next week – Watch the preview!