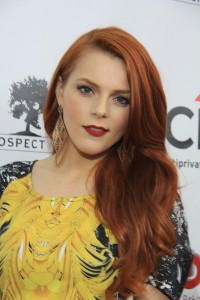 While the cast of One Life to Live is on hiatus, and waiting to see if they will soon be back into production, pending the resolution of the lawsuit with ABC, as Prospect Park told the L.A Times recently, the actors are beginning to lock down new and exciting roles and projects!

Amber Skye Noyes who came on to the Llanview scene in season one of the reboot as the mysterious “Michelle” and a spoiler in Matthew’s potential relationships with Dani or Destiny, has landed a prime time gig!

According to Deadline.com today, “Amber has been booked for a three-episode arc on the CW drama Beauty And The Beast with an option to become a regular.  She will play Tori, an innocent daughter of a powerful beast who is rescued by Cat (Kristin Kreuk) and Vincent (Jay Ryan) and then taken under their wing, where Tori will make some shocking discoveries about her life.”

Upon the news item being released, Noyes to took to her Twitter account where she related to her followers:  “Excited to announce I’ll be playing Tori on CW’s #beautyandthebeast next season! Thank u for the warm welcome! @BatBWriters #BeastFANmily”

One Life to Live’s executive producer, Jennifer Pepperman also related her enthusiasm for Amber’s primetime gig, stating via Twitter, “Congrats! I am so excited for you! Awesome!”

READ MORE
Rafael de la Fuente On 'Dynasty' Guest Star Danny Trejo: 'I Had An Incredible Time Shooting This Episode With Him"

So what do you think of Amber getting a primo part with the possibility of becoming series regular on Beauty And The Beast? Do you think soon other One Life to Live stars will be popping up in primetime, while they await the fate of the online reboot of the series? Comment below!

good for her. she has a new job. the rest of the cast on one life to live will move on. one life to live will not be back. lets face it. its over. i want kassie depaiva on young and the restless as the new isabella. that would work for me. tuc watkins can go to general hospital in a new role.

One Lifes finale, last scene: Natalie arrives to her apartment and makes a shocking discovery-the babysister is found stabbed to death and Liam is missing! Cut to street scene: a blonde woman walking down the street with a small child by her side. The woman is singing: ‘Hush little baby dont say a word’ ect. The woman suddenly turns to face the camera, and she smiles wickedly at the audience…its Allison Perkins, and the child with her is Liam!!! She resumes walking with him and continues singing. The end of first season! Fade to black! Season two: the return of John Mcbain in search of his missing son!!!

Wouldn’t that be great! So much story we could all see. Her is hoping it returns

I’m thinking you’re right….it’s been a fool’s game on Fans.

I agree. I predicted this would happen. The hiatus is not a smart idea. The actors need a paycheck. They are not going to just sit home waiting for OLTL to return. Once the show finally returns, they might have to get a whole new cast because many of the original cast members might be attached to other projects.

From day 1 PP gave all the cast the freedom to pressure other projects while under contract with them…
You will see others branching out if even for an episode on other shows if the opportunity comes their way..
Their online contracts are not like network tv soap contracts..

I was aware that they are allowed to pursue other projects. The issue is how long will the lawsuit take? PP is going head to head with Disney who can afford to make this difficult if they chose to by using legal tactics to delay a quick resolution to this lawsuit. Disney probably won’t though, but they could. Meanwhile, the cast members need to be paid and might sign on to long-term projects that would prevent them from taping when OLTL returns. I can’t see PP preventing them from landing long-term jobs on other soaps and TV shows when OLTL isn’t even taping. They need stable jobs.

Good for Amber. Nothing against her, but I really didn’t like her character and wouldn’t mind if she wasn’t back, should OLTL return.

That being said, I read an article that reminded me that all pioneers of different mediums fell flat on their faces when they started and those who followed learned form their mistakes and succeeded. Could PP be considered Pioneers in web-based soap operas? I wonder because I think, while some aspects of what they’re doing are different, many are the same as those who have come even before them. People like Crystal Chappell (who’s shooting a bazillion on-line shows), Van Hansis and Martha Burns, with shows like EMPIRE, GOTHAM and EASTENDERS, to name a few, have been hitting their marks.

So I want be patient and hope for the best. I find this halting production of OLTL because of what ABC did a bunch of hooey. Re-write what ABC did and go on. Maybe they can’t get RH, ME. or KA back right now. Move on. Forget that ABC killed Hope, Cole and Tea’s baby. They didn’t have to accept that. The fans would have understood if they had picked up as if the characters never went to GH.

Get OLTL back on the air and let’s move on before other stars get contracts for other shows. That would be the real crime in my eyes.

CW’s b& the beast is one of the most racially diverse tv shows and it’s quite good. It’s shocking that kristen kreuk wasn’t whitewashed and actually portrays a char who’s part Asian american! They even had her Asian american sister on an ep. Her boss is African american. The main villain is Indian american actor sendhil ramamurthy who is not only handsome but a very good actor best known for nbc’s heroes. It’s very diverse and quite well acted and entertaining for a sci fi tv show. They should continue more racial diversity on b&tb! While that other show abbreviated as b&tb should learn more abt racial diversity from much younger beauty and the beast.

SHE IS A LOUSY ACTRESS