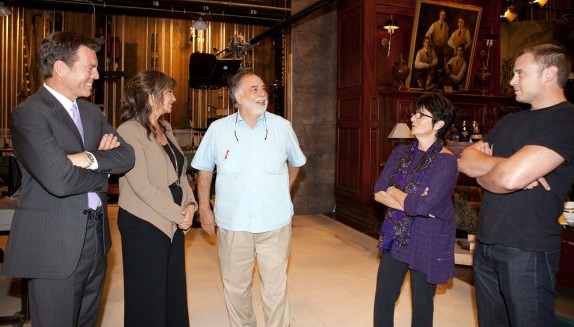 Well, here’s a something that we bet no one saw coming! According to the Huffington Post today, Academy Award winning writer-director Francis Ford Coppola ( yes, of The Godfather fame) visited the set of The Young and the Restless!

But what exactly was he doing there?  Apparently, Coppola is learning more about multi-camera and live TV and has been on set and in the control room at Y & R and their soundstages at CBS this week!

However, according to a tweet after Huffington Post first put up this item, CBS Entertainment Daytime V.P. Angelica McDaniel added Coppola had been to the Y&R set more often then mentioned relating,  “He’s been here a few times, but last week he was here all week.”

After observing production, Coppola said of the experience, “I’m enjoying being at The Young and the Restless. The people are wonderful. I’m learning a lot.”

Coppola is pictured here with Y&R’ actors:  Billy Miller, Peter Bergman, Jess Walton and the series executive producer, Jill Farren Phelps!  So the question becomes, what project could Coppola be working on that he has to see how The Young and the Restless tapes and produces an episode?  Now, we are sure some of you may jest he is there to take over the show!  But, what do you think of Francis coming to Y&R?  Comment below!

Days Of Our Lives On KATIE! Preview Feat. James Scott!

I’d welcome him coming to take over the show.

He’d know how to inject some drama into it.

Didn’t Francis Ford Coppola do the same thing on “Saturday Night Live” in 1986?

I want a mob storyline now. Please let that happen.

Good idea maria. i agree with you my friend.

Would love it if he made a movie about SOAPS!

Of course he was merely observing for some project of his– would be great if he created a night time soap– but whatever the reason, lets hope he stopped by the writers room and gave them some pointers.

…and hope he had a sit down with Phelps…

He is there to see how soaps are produced..
I can see why he would be curious because they are produced like no other programing..

Hope this is his next gig! Right now I feel it might be the show’s only hope! LOL

Another PR stunt for Phelps. She had actor James Franco on GH so now let’s bring in a big name producer/director on Y&R.

It would not through JP that Coppola would visit, it would be by Daytime V.P. Angelica McDaniel and most likely by Coppola’s request to observe production and the camera works on a soap opera set..
It has nothing to with PR lol it is all about cameras ..