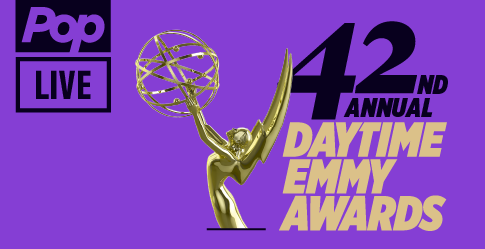 To get you ready for daytime’s biggest party of the year, Pop and the producers of this year’s 42nd Annual Daytime Emmy Awards are having some fun with the fans of the daytime television genre with their just posted Daytime Emmy Fan Favorite Poll where you can cast your vote in several soap related categories!

Some of the winners will be revealed as the telecast goes to commercial breaks during the televised ceremony to air live on Pop on Sunday night, April 26th beginning at 8PMET/5PMPST direct from the famed Warner Brothers Lot Stage 16 in Burbank, California!

Make sure to cast your vote! Then, let us know what you thought of the categories, and who you hope get the most votes!

On General Hospital, Is Valerie Spencer About To Come Between Dante and Lulu?

Voted,we will see who get it.

Yikes, what are they thinking putting Father Eric/Kristen in the “most shocking sexcapade” category. That wasn’t a sexcapade, that was rape. If a man had drugged a woman and taken advantage of her sexually, would that be considered a “sexcapade”? I don’t think so. This is a really fun idea, and I like all the other categories and nominations — but that just leaves a bad taste in my mouth.

It happened on “One Life to Live” as well, way back in 2004 when zany Margaret raped Todd.

Great memory Mama! That’s true. It was shocking at the time and she needed up having a baby boy from it!

Could. NOT. Agree. More!

They should not glamorize rape by including this storyline in a “sexcapade” poll. It should be removed immediately.

/// voted ..
anyone know if the emmys will stream/internet?
a good many of us do not get POP

I’m not sure, Su. I too, don’t get this POP channel, and I would also like to know if we can live stream. Hopefully, we can soon find out if that is possible. I’m all about the soaps, too! 🙂

hey Jeremy..
I just want to see the good stuff/the soaps awards.. I’m sure YouTube will have it..
or
Michael will post the vids of the good stuff..

davlestev1, Real Time With Bill Maher and Rachel Maddow are 2 among my must watch too.. So I don’t care about a one time thing on POP..

I don’t get this either and im upset that I cant watch my favorite actors and actresses get rewarded for doing awesome jobs. I sure hope they stream it online

And it would have been nice to NOT be FORCED to make a couple of picks…TalkShow and GameShow moment…SMH…I watch RealTimeWithBillMaher and RachelMaddow…come on..if you don’t want to choose in a category you shouldn’t have to.

Ladies, don’t fret. POP is just the channel formerly known as TV Guide Channel. Everybody gets that on their basic cable plan.

Leo..
not true.. comcast here doesn’t carry POP on any tier..
There are many cable providers including satellite who may not carry POP..

Voted for my soap favorites. But for soap votes to be counted you have to vote for game and talk show categories, which I don’t watch. And I guess vice/versa for non-soap daytime voters. Not very accurate or fair to any of the categories being polled.

Also why not a Best B**t**d Punch category for the guys. Probably not much competition unless you considered Nathan and Spinelli.

I don’t watch game shows either, but I watched the clips and voted on which I liked the best.

The only one that I wished there was a none of the above choice was favorite romantic couple. It must have been a horrible year of romance on the soaps if they chose these three couples to be the most romantic — Hilary and Devon, wasn’t romantic it was two selfish people having an affair. Bill and Katie– half the year he was chasing her sister and she was sleeping with her sister ex– yeah that is really romantic if you like keeping it in the family. That leaves only Nathan and Maxine– I guess having your first kiss over… Read more »

So agree!!! If these 3 represent what this gene thinks of a ‘romance’, no wonder soaps are dying!

Absolutely agree. Another reason to be saddened about what writers have done to Anna and Duke. Some may find theirs old fashioned and boring but some tango in the middle of chaos, and dark is nice. Even the possible Elizabeth and Jake had/has some charm compared to stallion and cheating.

I’m optimistic about this year’s show. Seems like POP is invested in it, which is good.