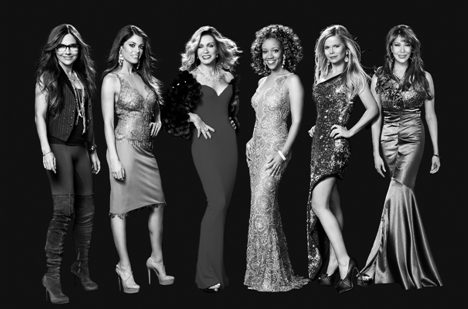 Will girl power reign supreme when six former daytime and primetime soap stars take control of their careers to produce and star in a new serialized drama? And can they get along to accomplish their goal? That is the premise surrounding Queens of Drama set to bow on Pop on Sunday night, April 26th (10PMET/7PMPT) with a one hour season premiere immediately following the network’s live broadcast of the previously announced 42nd Annual Daytime Emmys Awards!

After it’s season premiere, Queens of Drama will move to its regular time slot on Wednesday night’s with its next installment on Wednesday April 29th beginning at 8PMET/PT).

The half hour weekly series will have ten episodes in all that features an all-female cast working in front of and behind the cameras as they develop, pitch, and produce a new steamy series with the goal of landing a pilot deal by the end of the season.  The all-star cast includes Lindsay Hartley (All My Children, Days of our Lives), Crystal Hunt (Guiding Light, One Life to Live), Vanessa Marcil (General Hospital), Chrystee Pharris (Passions), and Hunter Tylo (The Bold and The Beautiful) with special appearances by Donna Mills (General Hospital and Knots Landing).

“Queens of Drama features a powerful, all-star cast of soap’s leading ladies, while tapping into the sensibility of female empowerment, taking charge and having it all,” said Paul Adler, Senior Vice President, Programming, Pop. “We’re excited to give fans a new perspective of these women with a reality series that debuts immediately following Pop’s exclusive live broadcast of the Daytime Emmys.”

Watch the first teaser promo for Queens of Drama to whet your appetite below! Will you be tuning-in to see how Donna, Hunter, Vanessa, Crystal, Chrystee, and Lindsay get along and try to produce their own soapy drama?  Share your thoughts below!

EMPIRE Grows Audience To 14.7 Million, Most Tweeted Episode-To-Date, Demo Dips Ever So Slightly!

Wow what a lineup I am soooo there!

Sharon Case is my queen of Daytime 🙂

I agree. Sharon Case should have been in that Daytime Queen as well. They have tried to destroy her character for a long time now. It looks like their going to try and pin Austin’s murder on her. If they do and they think they lost viewers before watch what happens then.

this looks SO staged and SO fake – even by reality show standards! in other words, i’ll be watching!!!

In January I believe.

Love it ! I’m watching for sure.

I was a big fan of Chrystee Pharis on PASSIONS. She was quite good and the reveal and playing out of her lesbian storyline was well acted…and completely ignored by the soap press. That was a shame. I hope she gets a chance to shine here and, as the minority, is not simply cast as the no nonsense balck girl steroetype or, worse, Omarosa/Starr Jones-esquw villain on the show. I always felt that, had there been more roles for black women on daytime, she would have been snapped up quickly by another soap.

Awful. We want more and better soaps not reality XXXX,

I’m with you..
I do like the phony staged reality shows..
they are not reality, actually they are staged ..

I wonder if Pop will end up ordering to series the primetime soap that the group of women are trying to put together.

Vanessa Marcil come back to GH, where U belong!!!
Networks R at an all time low, if this is the only nonsense
they can come up with. Reality shows R utter rubbish,turn
them off 4 quick cancellation.

I my be tuning in!

Definitely NOT for me! This clip makes the Chew, etc., almost look watchable.

Is it a reality show or scripted? I thought it was going to be a scripted show. Don’t think I’ll watch if it’s reality.

If I understand, it’s a reality show about these six women producing and starring in a pilot for a primetime soap opera.

It looks kinda fun in a guilty pleasure way.

Add Sharon Case to the mix and another viewer has joined. The only reason for Y & R is Sharon Case.