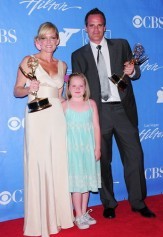 On-Air On-Soaps has got you covered to relive, and take another peak, at last weekend’s 37th Annual Daytime Emmy Awards from The Las Vegas Hilton in Sin City.   From the red carpet, we have posted 25 video interview gems with the following daytime movers and shakers, and performers:  As the World Turns: Austin Peck, Terri Colombino, Colleen Zenk and Jon and Kelley Menighan Hensley, to All My Children’s:  Bobbie Eakes and Susan Lucci, to General Hospital’s: Bradford Anderson and Drew Garrett, to Guiding Light nominees: Beth Chamberlin, and Crystal Chappell, to Days of our Lives: James Scott, Galen Gering, Peter Reckell and Louise Sorel, Chandler Massey and Gabriella Rodriguez, Lindsay Hartley, Shelley Hennig, Judi Evans, and Mark Hapka, to One Life to Live’s: Mark Lawson, to The Young and the Restless: Greg Rikaart, Eden Riegel, Clementine Ford, Paul Rauch, John Driscoll to The Bold and the Beautiful’s: Kim Matula with special guests, The Blue Man Group, and Brandon Beemer, with DAYS, Nadia Bjorlin.

Then, check out our Winners/Press Room Video clips where the night’s daytime drama award receipients;  from ATWT’s Michael Park, Maura West, and Julie Pinson,  to B&B’s Brad Bell and his cast, Drew Tyler Bell, to GH’s Directing team, and Julie Berman, to Y&R’s Billy Miller, to Agnes Nixon, the receipient of the Lifetime Achievement, are all featured from the podium as members of the press take turns asking the winners thoughts, reactions, and feelings on a myriad of subjects that seldom soap fans get to see.

For more on the Emmy with our Fashion Report from Days of our Lives, Nadia Bjorlin, and galleries from the night’s red carpe fashion, make sure to visit our Emmy microsite hub!